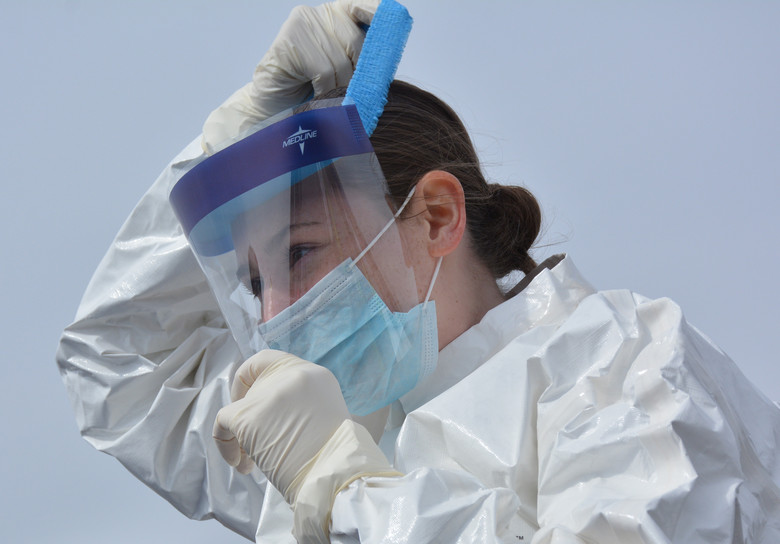 The Necessity — and the Tragedy — of Medical Volunteerism in the Pandemic

After Armen Henderson finishes his day job as a doctor of internal medicine and assistant professor at the University of Miami Health System, the 35-year-old starts a second shift. Wearing a respirator mask and gloves, Henderson spends his evenings administering donated Covid-19 tests to Miami’s homeless population.

Henderson devotes 20 hours a week to this treacherous unpaid work, describing it as “civil disobedience” because he and a team of 50 volunteers were breaking the Dade County stay-at-home order before it partially expired in mid-May. So far, the group has administered 150 free Covid-19 tests to homeless people, several of whom were rushed to the hospital by ambulance.

Henderson is just one strand of a medical shadow safety net that has exploded during the pandemic and is now a crucial source of care. The network is made up of nonprofits and regular folks working far outside the purview of major charities or even the medical establishment. They perform the kind of basic care that should be provided by local or federal governments but that is mostly absent at a time when “the supposed social safety net” has shredded, says Henderson.

The shadow network seeks medical volunteers with posters bearing slogans such as “We want you for medical work now,” evoking the collective efforts and sacrifice during World War II. Many states have allowed retired or inactive doctors to volunteer during the pandemic. For example, in addition to asking for donations of respirator masks, Boston Medical Center is looking for volunteers who are “able to provide support and services to the homeless who are isolated and quarantined.” Across the country, psychologists and social workers are offering free telecounseling to the distressed during the pandemic. Meanwhile, thousands of people are designing and sewing face masks in their homes to give to medical workers.

But all this generosity speaks to an American paradox, revealing what’s best about our country and what’s worst about our ill-prepared and ungenerous federal government. Henderson, who is black, also experienced another layer of the push-pull response to volunteers: policing of volunteerism and, in his case, racial bias. Henderson gained unwanted attention recently when a Miami police officer handcuffed and detained him as he was loading his van with boxes and bags containing tents he was distributing to the homeless. He was charged with illegally dumping trash in his neighborhood. The incident was caught on video and led to an internal investigation by the Miami Police Department, which found the officer’s actions were justified. Henderson, who believes he was a victim of racial profiling, is pursuing a lawsuit.

The expectation of volunteerism in times of crisis and an attendant lack of federal support for volunteers has a long history in the United States. Clara Barton, founder of the American Red Cross, famously said she was “offering a hand up, not a handout,” implying that handouts to the poor were a source of shame and that it was more dignified to receive aid from peers than from the government. Nina Eliasoph, a sociologist and the author of Making Volunteers: Civic Life at Welfare’s End, says the historical response to disasters was “‘Let’s get volunteers to aid their fellow citizens!’ Over and over, the idea was that getting the federal government involved would undermine community spirit and would degrade the recipients’ morality.”

President Ronald Reagan said as much when he remarked, “The size of the federal budget is not an appropriate barometer of social conscience,” and asked for volunteers to fill the gaps. George H.W. Bush famously lauded the “thousand points of light.” And Marvin Olasky’s 1990 treatise The Tragedy of American Compassion, beloved by politicians on the right, argues for “a biblical model for fighting poverty,” according to one reviewer, evoking a past when sickness and economic suffering were handled by wealthy ladies-who-lunch without “meddlesome” government interference. In other words, volunteerism has long been the bedrock of the conservative movement and, to some extent, the United States at large.

But this sometimes confused passion for volunteerism has its limits. It should never replace federal and local government efforts or more formal philanthropic work. Eliasoph argues that Americans incorrectly view volunteerism as a seesaw — if government aid goes up, the value and prevalence of volunteerism goes down. The seesaw is a false construction, however. Countries with the world’s highest volunteerism rates, such as the Netherlands, Denmark, Canada, and New Zealand, also all have strong government-supported social safety nets.

‘It Shouldn’t Be Us Volunteers’

Too often the call for more volunteers allows government leaders to paper over the systemic causes of suffering. “We shouldn’t exist. It shouldn’t be us volunteers,” says Henderson, whose current budget is $10,000. “But we do what we have to do as the government forgets about poor people.” His team has found very sick individuals living, infectiously, on the street. “They are sitting on benches and interacting with restaurant owners and others,” he says.

Groups similar to Henderson’s have sprung into action across the country in the last few months. They include GetUsPPE, which solicits donations of masks and other medical necessities and distributes them to hospitals. A local branch, GetUsPPE Chicago, is mostly composed of medical students — some 500 strong — and is student-led and completely volunteer. One of its leaders is Tricia Pendergrast, 27, a first-year student at Northwestern University Medical School. She helped crowdsource cash donations to purchase respirator masks and head coverings that protect health-care workers from infectious particles. The cost was astronomical because of a so-called Covid surcharge — $13,000 over the normal cost to fly rather than ship them from China to the United States.

But the equipment couldn’t wait. “I knew young health workers who were writing living wills and sending banking information to spouses because their work was now so incredibly dangerous,” says Pendergrast. “I couldn’t take it lying down.” So every day after finishing her medical classes, which are now all online, Pendergrast jumps into her voluntary work, setting off for local hospitals, delivering donated gowns, gloves, and handmade masks sewn by a crafty posse of University of Chicago students.

The shadow network also includes people with no connection to the medical field. Sam King, a 37-year-old Sacramento, Calif., project manager at a technology firm, donates both time on his home 3D printer and personal funds to OpShieldsUp.org, whose volunteers use their home printers to make face shields for doctors and nurses. “I truly believe this is a fight for our lives,” King says. “We are all working to support our critical life-support system.”

While the medical shadow safety net has grown substantially during the coronavirus pandemic, it has long been a source of care in other crises. Henderson, for example, along with a network of other advocates in Florida, typically does volunteer disaster-recovery work during hurricane season, including creating “pop-up shelters” throughout Miami for those who can’t afford to leave their homes. Henderson says he grew up in poverty in Philadelphia where his parents, with approximately $35,000 in combined income, supported “four kids in dilapidated housing where factories spewed chemicals into the pipes and schools closed because of asbestos.” Those experiences intensified his commitment to treating others suffering from poverty and neglect, especially people of color.

His commitment, along with that of many others, during the worst health crisis in a century speaks to the good that can arise from tragedy. But it also underscores another tragedy — the lack of basic equipment and essential services in the wealthiest country in the world, which has resulted in needless illness and death.

Says medical student Pendergrast: “I wake up every day and hope today is the day that GetUsPPE Chicago won’t exist. I hope that day is coming very soon.”

Alissa Quart is executive director of the Economic Hardship Reporting Project and the author of six books, most recently “Squeezed: Why Our Families Can’t Afford America.”

Co-published with The Chronicle of Philanthropy.