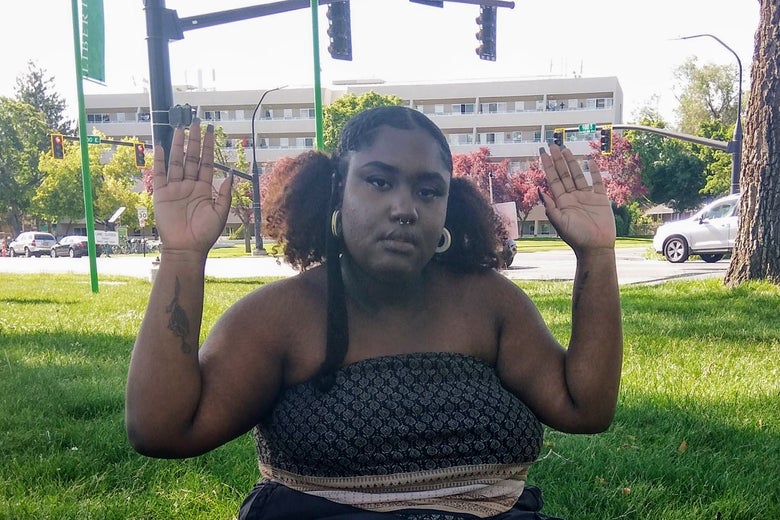 Taking to the Streets of a Suddenly Restless Salt Lake City

After a long day of protesting, on a hot summer day that symbolized generations of black pain and sorrow, Zala Long barely registered the sight of the white man with the bow and arrow slung over his back. He was middle-aged, with short, cropped silver hair, standing next to his car close to the downtown library, amid a long line of other vehicles.

It was Saturday, May 30, five days after George Floyd had been killed by a Minneapolis police officer who pushed his knee onto Floyd’s neck for 8 minutes and 46 seconds—igniting the anger and frustration of thousands of civil rights protesters across the country. In Salt Lake City, the white man was one more passing spectacle after hours of unrest. Long stared at the smashed glass walls of the train station across from the donut shop on 400 South, then watched in quiet awe as people scrawled “All Lives Matter” and “ACAB,” for “All Cops Are Bastards,” across city buildings.

Long is a 22-year-old African American who was born and raised in Utah, a state plagued by what she calls “sugar-coated racism” against black people, where black people constitute only 1.4 percent of the overall population according to the U.S. Census. Long, an honor student at Salt Lake Community College, defines the “sugar-coated” treatment as a form of denial that allows whites to feel that they are not around enough blacks to see them as “a problem.” Yet when faced with an actual black person, they automatically draw upon the negative stereotypes impressed on them by society at large: that black people are angry criminals and therefore dangerous.

For Long, those kinds of reactions have meant a lifetime of being singled out by everyone from the police to teachers and professors to so-called friends. “I am working on not numbing out from it,” Long said.

Sitting in a park on a sunny day, she spoke with a weariness that belied her youth, ticking off a list of ways that she has learned to shape herself inside a culture that has forced her to mute her personality and surrender parts of her life to authority.

“Put your hands on the steering wheel as soon as a police officer approaches your car,” she said. “Don’t go outside alone after dark. I don’t even like walking to my mailbox alone if I can help it, not even in the middle of the day because you never know when a police officer will see you and detain you. If one does stop you, put your hands up in the air to show you aren’t going to shoot them.”

In downtown Salt Lake City, in a crowd that police estimated to have been between 1,000 and 2,000 people, she said she let a truer, often-stifled voice inside her loose. “Black lives matter!” she shouted along with the others. “I matter.”

It’s emotionally exhausting to shout those things, Long says. And it’s draining to have watched the countless online videos of black people dying at the hands of white people in positions of power. But her own personal experiences were already exhausting.

When she was in high school, she watched many of her black classmates be punished for minor infractions by being handcuffed and hauled off to jail by campus police. Seeing that day after day made her feel as if people with dark skin weren’t meant to survive in this society, she said.

As a 14-year-old she stood helplessly by as police officers detained and questioned her mother, who was heading home after shopping with her daughter at the mall.

They were between the Lucky 13, a bar and grill known for its burgers, and a Sears warehouse, her mother, Betty Long, told me. “And the cops are telling me: ‘Come here.’ And I’m like: ‘Me?’ We were just trying to get to our apartment.”

Betty Long said she lifted her hands, terrified, so that the officers wouldn’t assume she had a gun. She asked them what was going on. But they wouldn’t answer, she says, only asked questions and then ordered her to “Be quiet,” “Put your hands behind your back,” and “Get behind the car.”

“I was bawling. I was scared out of my mind. I’m with my kid and this is happening in front of her and I can’t protect her at all.”

Just as one of the officers opened his squad car door to usher her inside, another officer nonchalantly announced that she wasn’t the person they were looking for, after all.

“No one said, ‘I’m sorry, this is what happened.’ They just drove off. It was very traumatic.”

When they made it back to their apartment, mother and daughter went over the day’s events, with Zala continually asking her mother what they could have done differently to better protect themselves. Since then, the 22-year-old has become the one in her family to share tips on how to stay as safe as possible around the police.

“I never let my guard down when I’m outside my home,” she said.

At the Salt Lake City protest, Long knelt with countless other protesters in front of a statue of a pair of open hands, a piece of artwork originally created to symbolize open-handed service. But to drive home another message, someone had splattered the palms of the hands with red paint.

“I closed my eyes and repeated the names in my head,” Long said, “ ‘George Floyd, this is for you, Ahmaud Arbery, this is for you’…and I kept looking to the sky because that is where I think they live now.”

Long stood in the commotion of the train station that Saturday, texting her cousin that she was ready to go home. “A car is on fire!” Long says she heard someone scream. Minutes later, the two of them left the protest.

Soon after that, police say that the man with the bow and arrow —Brandon McCormick of Taylorsville, Utah—aimed his weapons and shouted “All Lives Matter.” The crowd reacted by attacking McCormick and flipping his car and setting it aflame. McCormick, 57, was later charged with possession of a dangerous weapon by a restricted person, as well as aggravated assault and threatening to use a dangerous weapon in a fight, Salt Lake City police say.

“It got very dangerous into the night,” said police Sgt. Keith Horrocks, stating that at one point, rescue police assisted a police officer in leaving that officer’s car, as angry protesters surrounded the vehicle, Horrocks said.

Though Long says she had no idea how that particular protest would erupt, she will continue to attend such events, even if doing so puts her life at risk. Sleep was a long time coming that night, she says. When it finally arrived, she dreamed of Floyd.

“He was marching at a protest and shouting: ‘No Justice, no peace.’”

Lori Teresa Yearwood is a trauma-informed, freelance journalist who works as a contributing editor for the Economic Hardship Reporting Project. Her articles have appeared in the Washington Post, CNBC, the San Francisco Chronicle, and the American Prospect, among others.