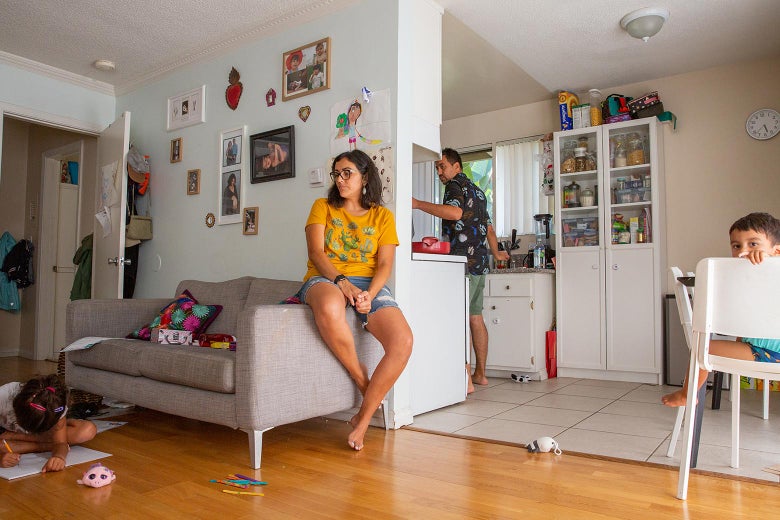 Susana Morales and Oscar Marquez’s family. In the past, Marquez’s mother has helped look after the kids, but now she’s recovering from the virus. “It took away even that opportunity of having a few hours without the kids, even for the sanity,” he says. Photo by Arlene Mejorado
Families, The Pandemic

Arielle Cantatore, 36, a mother of two in Rhinebeck, N.Y., spent the spring and summer of the pandemic searching in vain for a day-care center that would accept her newborn while she works as a relief veterinarian, the pet-doctor equivalent of a substitute teacher. That she would keep working rather than extending her unpaid maternity leave was a no-brainer for her family. Her schoolteacher husband’s salary doesn’t cover their living costs, and she’s carrying almost $300,000 in student debt from veterinarian school.

Yet when Cantatore called several different day cares in her area, she couldn’t find spaces. She eventually found one where the ratio of babies and children to caregivers — 7 to 1 — seemed too high. So Cantatore continued to stay home with baby Maggie, not earning as her nights grew sleepless. Meanwhile, when shutdowns abated, her 3-year-old did go back to her nearby day-care center, at a cost of $700 a month. Despite parental pleading, it doesn’t admit infants.

Cantatore’s difficulty is more than a private moment of peril. There is a child-care shortage for the youngest Americans. There have always been more limited openings at centers for the smallest kids — because babies are more expensive to care for than older children — but the pandemic has exacerbated the problem. That means that some of those hurting the worst from today’s shortage are the families of the littlest and most vulnerable children.

The day-care situation was precarious long before the pandemic arrived, yet now it’s a crisis, especially for the youngest cohort. According to an August 2020 Center for America Progress report, based on data collected between December 2019 and March 2020, “licensed childcare is more than three times as scarce for children ages 0 to 2 than it is for those ages 3 to 5” — a situation the center terms “dire.” While the demand is always great — there are roughly 23 million children under 5 in this country, and more than half rely on child care — even in good times running centers is a low-margin business, and there’s an incentive to give preference to older children.

The precise numbers vary by state, but the legally allowed ratio of babies to caregivers ranges from 3 to 1 to 6 to 1, says Elliot Haspel, child-care expert and author of “Crawling Behind: America’s Childcare Crisis and How to Fix It.” Meanwhile, the ratio of caregivers to 4- or 5-year-olds is much more permissive: One trained adult is allowed to care for 10 or even 20 preschoolers, depending on the state (although federal recommendations suggest one adult for 6 to 10 children), and for children 5 and over, the ratio is even higher.

Myra Jones-Taylor, the chief policy officer at the organization Zero to Three, a nonprofit group that advocates for babies and toddlers’ well-being, says 18 percent of child-care centers have closed since March. Without support, more closures may well become permanent: Two in five centers say they are at risk of closing now without additional assistance, according to a survey by the National Association for the Education of Young Children, an industry organization.

Money problems increase the incentives to exclude babies. Day-care providers “are thinking, ‘I can open my doors for older kids and just provide one adult for them, and my numbers will add up,’ ” Jones-Taylor says. Social distancing regulations further increase costs: The Center for American Progress estimates that operating expenses are nearly 50 percent higher than before the pandemic, with larger increases for younger children. And more parents of older children are looking for child care, given that distance learning means there is no more after-school care. Some centers are even taking school-age kids during the day.

Dasja Reed, 31, who lives in New Orleans, was unable to find a suitable day-care center for her almost-2-year-old son Jarret from March through late August. She was at home with him during the shutdown, and didn’t need child care, but she didn’t have anywhere to send him once she was asked go back to work; the center he had been attending never reopened. As she looked for another slot, Reed, a single mom who works at the New Orleans Recreation Department, had to take unpaid time off, putting her and her son in economic jeopardy.

The day-care shortage is pushing women out of the workforce and forcing them to cut their hours — with drastic consequences: In August, after the coronavirus relief package known as the Cares Act expired, nearly 2 in 5 caregivers were concerned that they wouldn’t have enough food for their families in September, according to the Rapid Assessment of Pandemic Impact on Development-Early Childhood project at the University of Oregon, which since April has surveyed more than 1,000 nationally representative families on how the coronavirus has affected them.

The Cares Act included support for small businesses — as well as extra unemployment-insurance payments — but very few day-care centers secured loans or other funding. The House sought to fill the void by introducing the Child Care is Essential Act in July — it would help keep care centers open, pay their staff and offer financial aid to families — but it stalled in the Senate. Last week, the Democrats folded a version of that legislation into their updated Heroes Act, the sequel to the Cares Act, including $57 billion for child care

Given the Senate’s continued inaction, states have started to pitch in, although more money is needed: Illinois, for example, recently offered a $150 million subsidy to child-care providers; Michigan, $18 million.

The money to support child-care centers in the Heroes Act seems like a crucial federal intervention, given the scope of the current crisis. But over the longer term, more efforts will be needed to help parents pay for day care — because even when spaces are available, families can’t afford them. In theory, low-income families can get child-care subsidies through the Child Care and Development Block Grant program, but fewer than 1 in 6 families who qualify for the program receive the help they need. The $3,000 per child cash payment that Democratic presidential nominee Joe Biden has suggested — annually, for the duration of the pandemic — would go a long way. (It rises to $3,600 for children under 5.) So would a much broader Biden plan for investing $775 billion in care of all kinds, including child care, over 10 years.

That we have been left alone in this national catastrophe to navigate a landscape of shuttered day-care centers and chaotic schooling is deeply unsettling for many us. It should not rest on individual families to discover a tailor-made solution for a problem that affects almost every family. And what makes the scarcity of day-care availability for babies and toddlers particularly wrenching, experts warn, is that the years from 0 to 3 are perhaps the most crucial for emotional and intellectual development.

In the case of Arielle Cantatore, her day-care search — simultaneously gratingly banal and painfully intense — finally ended, after months of searching. The new center adds a roughly 40-minute round trip to her day and costs about $700 a month, but it’s worth it, she thinks. “I get angry at this country,” Cantatore says, “that it doesn’t take care of its moms better.”

Alissa Quart is the executive director of the Economic Hardship Reporting Project and the author of “Squeezed: Why Our Families Can’t Afford America.”