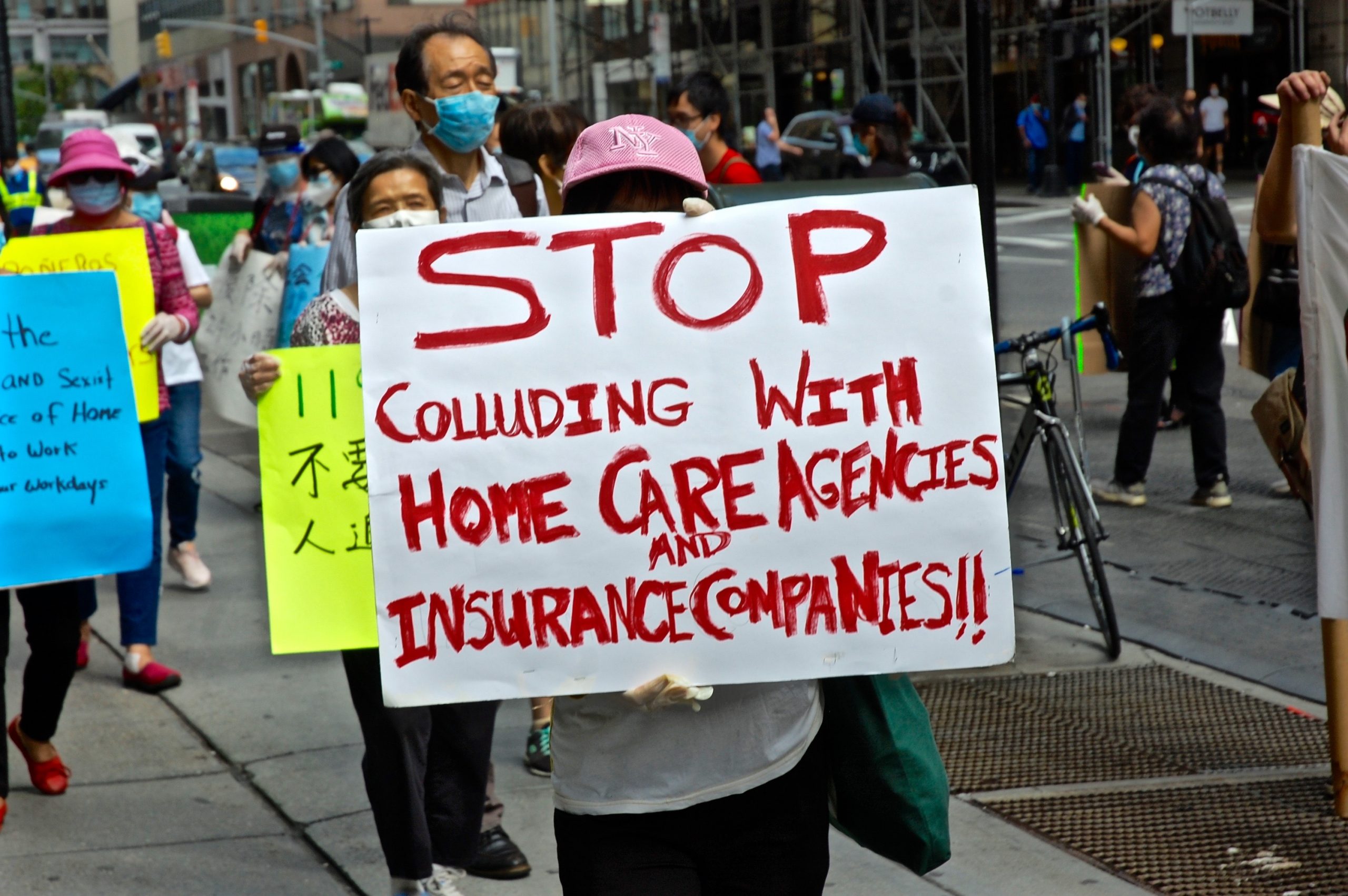 Nearly every day, 66-year-old Lai Yee Chan’s aching body reminds her of the 22 years she has worked as a home care attendant for the Chinese Planning Council, including a grueling marathon of 24-hour shifts that could last five days at a time. The shifts were demanding, forcing her to be confined to her charges’ homes, attentive to every need at any time. Countless days spent indoors left her bones brittle from lack of sunlight and the vital vitamin D it brings. The years of inconstant sleep gave her chronic insomnia and caused her eyesight to deteriorate. Yet, with three children to support, and her husband quitting his job to watch them, she feared asking for a more reasonable work schedule.

“At the time, because I had to support my family, I had no choice than to work the 24-hour shift. If I refused, then the company would not give us the work,” she said.

Fed up, Chan and nearly 100 home care workers joined The Ain’t I Women Campaign, formed by the Chinese Staff & Workers’ Association and National Mobilization Against Sweatshops, to demand the abolition of the 24-hour shift in New York state. They are also accusing 1199 SEIU, which represents many home care workers and is one of the largest unions in the country, of siding with the home care industry instead of its workers. 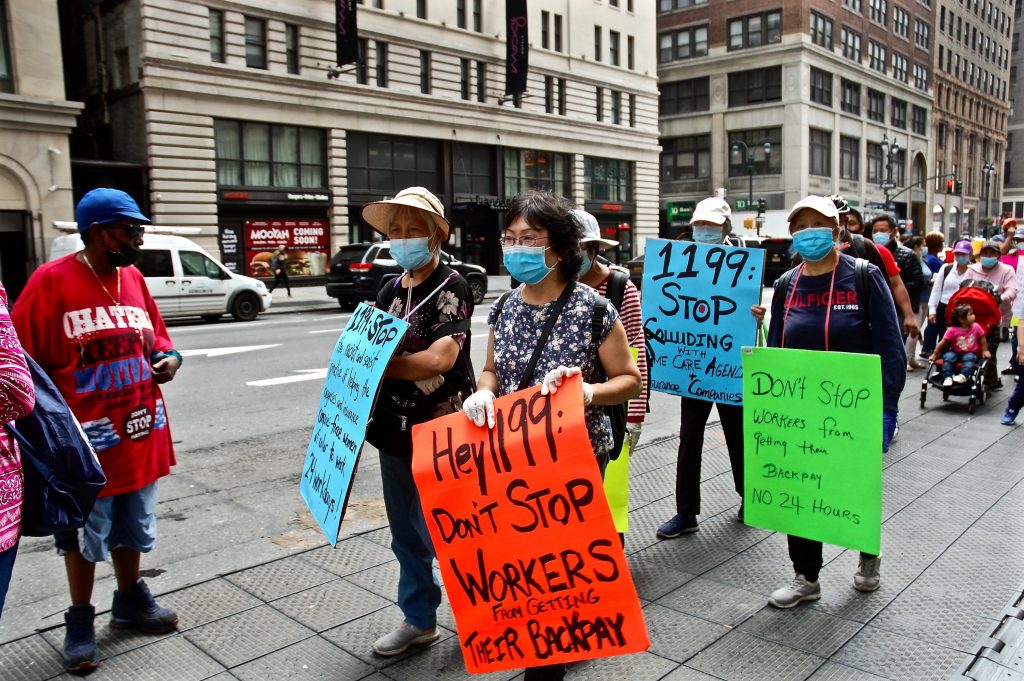 In New York, the home health care industry is a $13 billion business. Many are required to work 24-hour shifts. Health care aides may be paid for 13 hours of a 24-hour shift, as long as the aides are given at least eight hours of sleep time (with five of those being uninterrupted hours) and three hours of meal breaks. However, according to Chan and Lum, workers often work way past 13 hours and don’t receive any payment for the hours that are past the 13-hour cap. Wage theft is prevalent in the industry. According to the New York State Department of Labor, between 2019 and 2020, there have been 332 home care wage theft cases recorded thus far. Last year, New York Attorney General Letitia James secured $450,000 in back pay and damages for over 100 immigrant home care workers who threatened with deportation after they complained about unpaid wages. In January, New York Mayor Bill de Blasio announced a nearly $500,000 settlement agreement for 4,500 home care workers after 11 home care agencies violated New York City Paid Safe and Sick Leave Law.

At the height of the pandemic, when working-class communities were disproportionately suffering from COVID-19, as essential workers, home care providers like Chan continued to venture out amidst the plague-ravaged streets to care for their patients. The industry is almost predominantly composed of working-class immigrant women. Sarah Ahn, an organizer with the Chinese Staff & Workers’ Association, believes the unions lack addressing the needs of home care workers bottles down to racist and sexist attitudes the union has internalized, despite its progressive values.

“You have these mostly women workers who have been fighting for justice for years because the 24 workdays have caused them so many health issues and it has been made more apparent during the pandemic,” she says. “So it shows how the union perpetuates these same racist and sexist standards.”

“People feel really upset and angry that this union, that is one of the biggest and considered amongst the most progressive is working against workers attempt to retrieve their stolen wages and upholding this 24-hour workday for these women workers,” said JoAnn Lum, an organizer with National Mobilization Against Sweatshops and Ain’t I A Woman Campaign. “It’s setting a really bad example for not just the home care industry, but for other workers and the labor movement.” 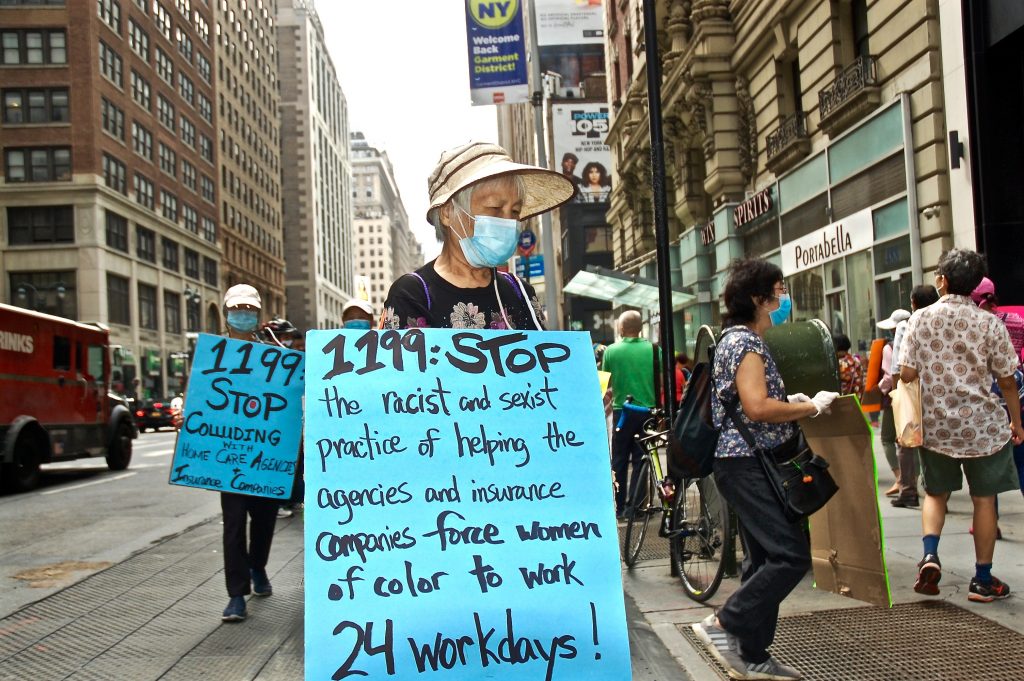 Neither CPC nor 1199 SEIU responded to requests for comment, but during a recent protest outside their Midtown Manhattan headquarters, George Gresham, president of 1199 SEIU, circulated a statement refusing to publicly endorse the campaign to abolish 24-hour shifts and instead insisted that the state needed to “allocate roughly $1 billion in Medicaid funding” to address compensation issues.

Lum views the union’s responses as a failure of the union movement in general to address fundamental injustices.

“If you have a union essentially saying 24-hour workdays are okay, then that means there is no bottom.”

With nearly 130,000 home care workers in New York City alone, it is also by far the city’s largest workforce. In fact, the annual average income for a home care worker in New York is $26,240. In contrast, New York is the most expensive city in the country, with the average rent for an apartment costing $3,228 a month. After 22 years, Chan was only making $15 an hour.

Despite the celebration of essential workers in the media and on the streets, Chan felt invisible and sacred that she was further putting her health in jeopardy. Her fear was well-founded. A recent study by the American Medical Association found that home care workers faced greater instances of alienation and a heightened risk of contracting and transmitting COVID-19. Workers like Houndoran immigrant Maria Montoya, say that her home care agency, which she declined to mention by name out of fear of retribution, failed to provide her with adequate PPE and was instead given a small supply of cheap masks. Maria claims when she complained to the union, nothing was done. For her, it’s just another example of the union siding with industry instead of its rank and file.

“Not in any way is the union protecting the workers,” she said. “I’m always tired because of the 24-hour shift. Physically it’s so demanding and my back always hurts. How can I take care of anybody if no one is protecting us?”

While the Fair Labor Standards Act (FLSA), which created a minimum wage and established overtime pay, was passed in 1938, it wasn’t until 2015, that home care workers were covered by the FLSA, and they were still barred from receiving overtime pay.

“What people don’t know is that you don’t have the right to limit the number of hours you work,” said Shirley Lung, professor at the CUNY School of Law, who focuses on issues affecting immigrant and low-wage workers. “We don’t have a right to protect and defend ourselves against compulsory hours.”

Lung views the fight against the 24-hour shift as the result of systematic exploitation, noting how the current laws support the right of employees to demand that workers work 24 hours, but don’t extend protections from retaliations to workers who choose not to work 24 hour shifts.

However, the law could soon change. Last year, state Sen. Roxanne Persaud (D-Brooklyn) and Assemblymember Harvey Epstein (D-Manhattan) introduced legislation that would effectively abolish the 24-hour shift by limiting home care workers’ shifts to 12 hours a day, 50 hours a week, except voluntarily in “unforeseeable emergent circumstances.” According to Epstein, 1199 SEIU has not signaled its support of the bill and would like to make 24-hour shifts a choice that workers have if they wish to work such a shift.

“I don’t know any worker who thinks working 24 hours a day, five days a week is a choice they would make unless they had no other choice. It’s not about freedom of workers but economic duress people are in,” Epstein said.

Sarah Ahn, a labor organizer with the Flushing Workers Center and member of Ain’t I A Woman Campaign, believes the unions lack support for the bill shows where their true interest lies.

“It shows how the union is more interested in protecting the industry, meaning protecting the exploitation of these workers and the practice of them working days on end and on top of that having their wages stolen.”

As they await to see what progresses is made in Albany, Chan, along with the rest of the campaign vows not to rest until they win. They plan on continuing to hold 1199’s feet to the fire by engaging in monthly protests outside their offices.

“We need to tell people what the union is really doing, it is not standing with the workers.”

Amir Khafagy is a New York City-based journalist. He has contributed to publications such as Vice, Bloomberg, The Appeal, Talk Poverty, Truthout, Gothamist, Jacobin, Curbed, City Limits, and In These Times. 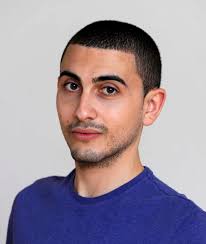 Amir Khafagy is a New York City-based journalist. He has contributed to publications such as Vice, Bloomberg, The Appeal, Talk Poverty, Truthout, Gothamist, Jacobin, Curbed, City Limits, and In These Times.