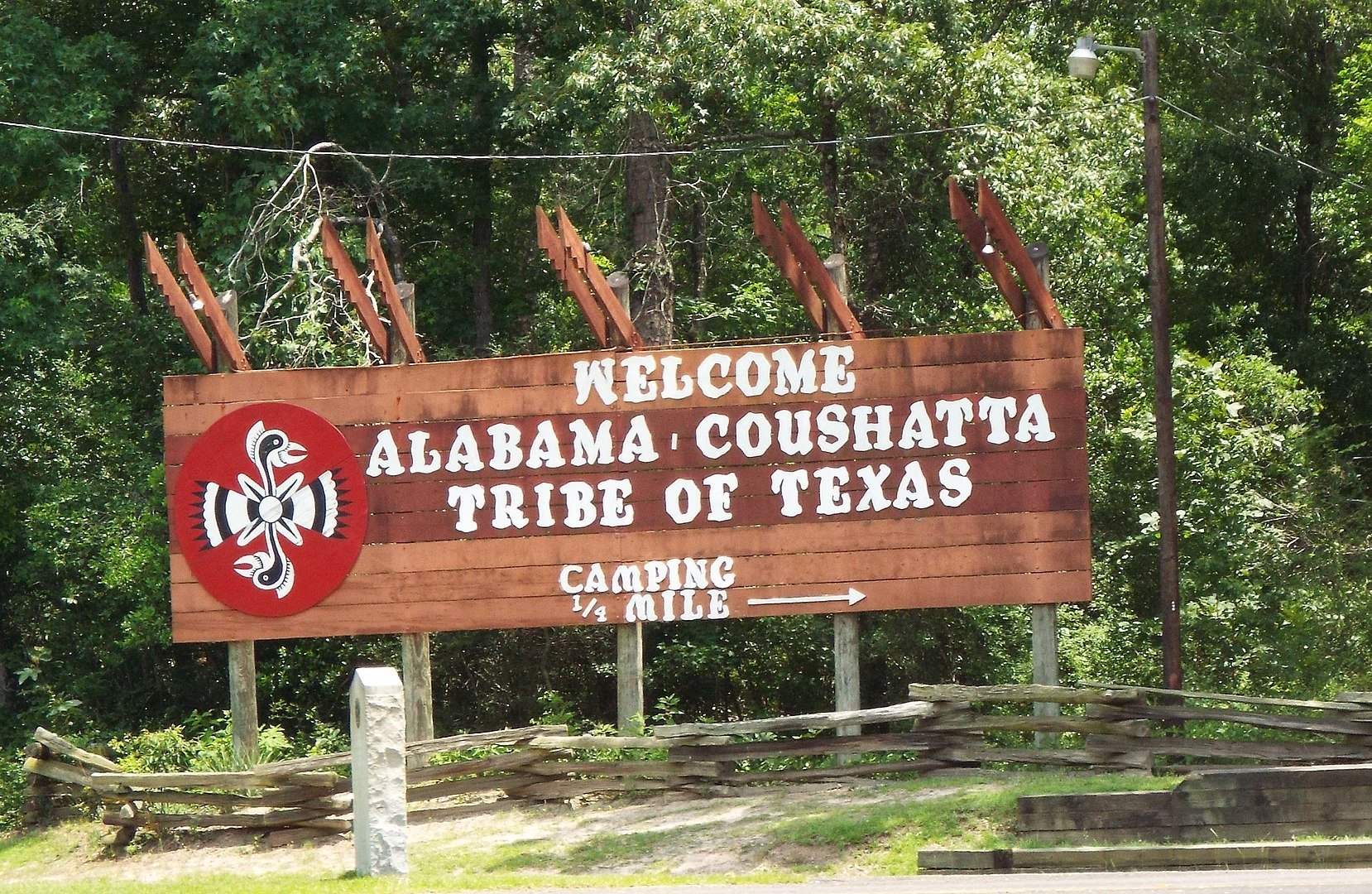 A large sign at the Alabama–Coushatta Reservation east of Livingston, Texas. Photo by Lance L. Lowry via Wikimedia Commons
The Pandemic

On March 23, the Alabama-Coushatta Tribe of Texas issued its first stay-at-home order. In April, the tribe would restrict out-of-state travel, and in May, officials shut down nonessential tribal offices and businesses and eventually banished a tribal citizen for 90 days who refused to comply with the health directive. “He could not come onto tribal lands at all,” said Alabama-Coushatta Chairwoman Cecilia Flores. By June, mask-wearing and temperature checks were mandatory.

In April, the Ysleta Del Sur Pueblo issued its first stay-at-home order, mandated mask-wearing, and closed nonessential tribal offices and businesses. And in October, as coronavirus infections began to climb in surrounding El Paso, the Pueblo implemented daily curfews, set up checkpoints monitored by tribal police to control travel, and limited the number of tribal members per household allowed to go out for essential items like groceries and medication.

Indigenous nations, despite taking serious measures to keep their communities safe, are disproportionately affected by COVID-19. To try to keep the virus under control, tribes have enacted stricter guidelines than state or city governments. “We’re just not taking chances,” Flores says. “We’re just too small a population to risk it.”

In Texas, there are 41 cases per 1,000 people, but for the Alabama-Coushatta, the number is about 52 cases per thousand. The Native American population in El Paso County, where the Ysleta Del Sur Pueblo is located, has had 71 cases total. According to a recent report from the Centers for Disease Control and Prevention, Native Americans are almost four times more likely to contract the virus than white people. “Persisting racial inequity and historical trauma have contributed to disparities in health and socioeconomic factors between [American Indian and Alaska Natives] and white populations that have adversely affected tribal communities,” reads the report. The CDC also reports that higher rates of incidence can also be attributed to “reliance on shared transportation, limited access to running water, household size, and other factors that might facilitate community transmission.”

The Alabama-Coushatta have 1,375 citizens and have seen 72 cases since testing began in March, with three deaths. In order to keep numbers down, the tribe created a COVID-19 task force in March. Paula Alec is the lead nurse for the only Indian Health Services facility in Texas and initially led the effort.

“We were doing the swabs and the testing and the contact tracing and calling each household on a daily basis seven days a week until they were cleared from quarantine,” Alec said. “It was a chore, but we worked together and got that done.”

In July, the Alabama-Coushatta established a public health department to handle contact tracing and infections, including coordination of positive infections: Those exposed or confirmed positive for the coronavirus are given lodging at the tribe’s cabin rentals until they are cleared to reenter the community. During quarantine, the tribe provides all needed essentials.

“If they had intergenerational homes, we were able to actually take the person that was positive or potentially exposed, move them out of that home into an isolated facility,” Flores said.

When infections began to drop by September, Flores reopened the reservation and government offices, but in late October, cases began rising again, prompting a second two week shelter-in-place order and curfew for the tribe in the first half of November. “Every time we’ve done that, the numbers come back down,” Flores said.

Support for citizens has been paid for by federal coronavirus relief and PPE was supplied by Indian Health Services, but other funding has come from the tribe’s casino. But the pandemic shuttered the casino for nearly seven months, and like other Indigenous nations, that closure will have an impact on budgets.

“Many tribes provide economic and social programs. They operate a government. They have different kinds of services, businesses that they operate,” said Alan Meister, an Indian gaming analyst with the economic consulting firm Nathan. “All of these things are in jeopardy when you don’t have your primary revenue sources.”

While Indian casinos have reopened with limited capacity, masks are required on casino floors, machines are frequently cleaned, and thermal cameras have been installed to check temperatures, the financial hit could impact tribal budgets and pandemic response, which could drive COVID numbers even higher as the State of Texas continues to muddle through its own response to the crisis.