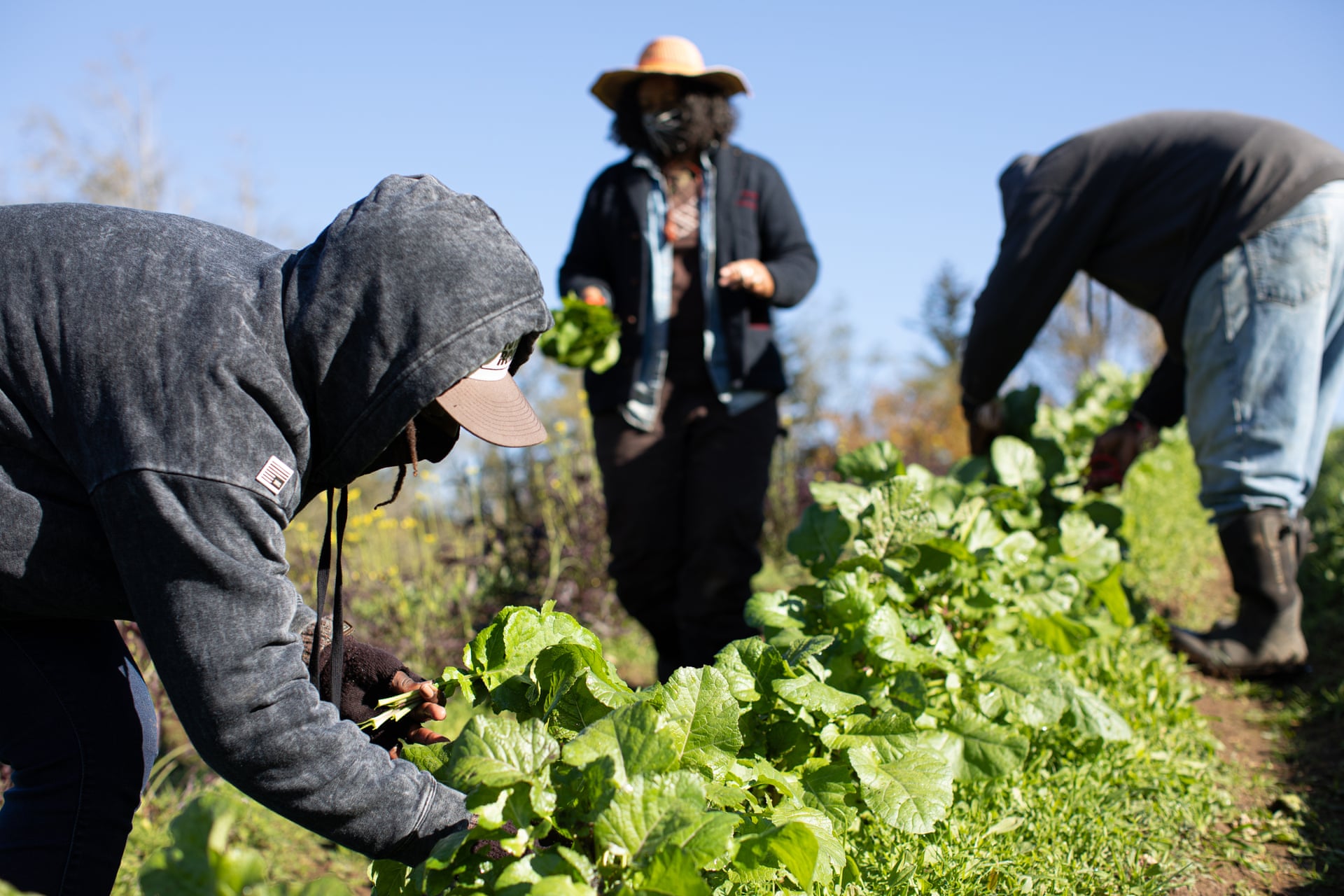 Just 45,000 of the 3.4 millions farmers in the US are Black, according to the 2017 Census of Agriculture. Photo by Intisar Abioto
Heartland, The Pandemic

Malcolm Shabazz Hoover is rattling off his vegetable varieties to two potential customers from a local restaurant.

“It’s called Brassica juncea, a west African mustard green,” Hoover says to Marissa Lorette and Ian Watson, co-owners of BeesWing, a local restaurant looking to work with Black businesses. He picks some from the ground and offers it to them. “Taste it.”

“It’s sweet and spicy,” Watson says, looking pleased and happily confused, and Black Futures Farm bags another client. This brings the number of entities to which it sells produce through the city’s Community Supported Agriculture program to 17 – in less than a year of operation.

I have come to meet Hoover on his micro farms at Portland State University’s Learning Gardens Laboratory. I’ve known this Black naval reserve vet for many years – and the silver-haired 50-year-old has, at times, been one of the most restive and unstable of my Portland associates. When I heard he had turned to farming, I had to see it for myself.

As we walk along the immaculate rows of kale, I still cannot believe he has raised this produce from seeds to maturity. The Hoover I knew carried a whiff of self-destructiveness; this one radiates cultivation energy. 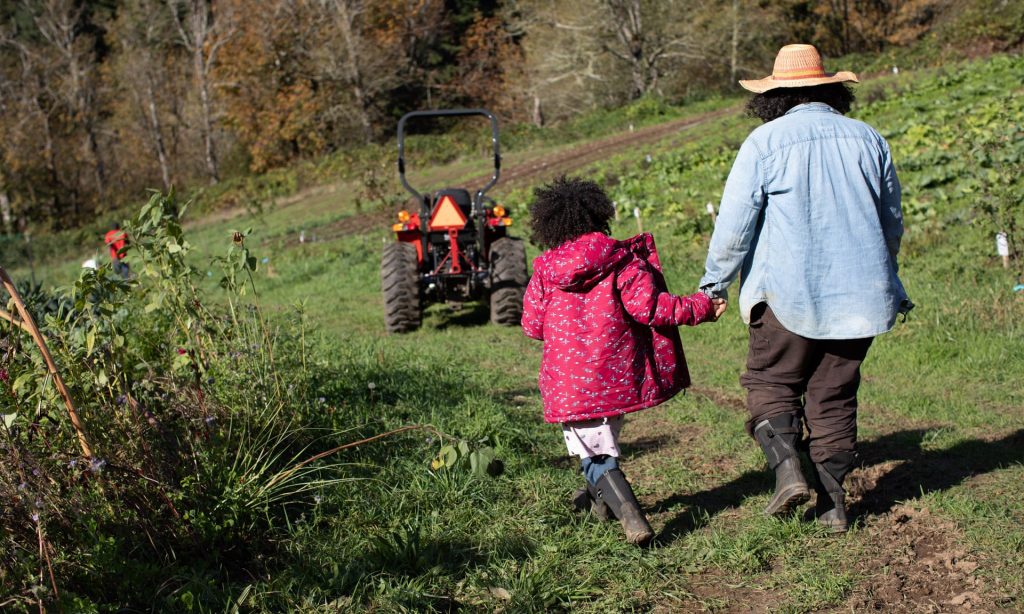 Mudbone Grown, started by Art Shaver and Shantae Johnson, has a commitment to teaching others about farming and land sustainability. Photo by Intisar Abioto

In the imagination of Black America, farming has existed as a centuries-long, government-enacted crime scene. Now Hoover’s fledgling business, and others like it, are part of a nationwide movement seeking to address the systemic racism denying Black people land and food sovereignty.

Predating Black Lives Matter, this movement has found its profile amplified during the latest protests and calls for justice after the murder of George Floyd. Small and independent, these farms produce the fresh food lacking in many communities of color and – most profoundly – restore a rightful heritage. It is a remixing of a broken song about the soil and the relationship of Black Americans to it.

There were more than 900,000 Black farmers in the US in 1920, but of the country’s 3.4 million total farmers, just 45,000 are Black according to the 2017 Census of Agriculture. That’s just over 1% of farmers, despite Black or African American people making up 13% of the population. In 1997, a class discrimination lawsuit was filed, Pigford v Glickman, which would find that the US Department of Agriculture (USDA) had discriminated against Black farmers from 1983 to 1997. Its controversial settlement injected $1bn (£740m) into Black farming, but dragged on for years.

A paucity of Black-owned farms means a dearth of healthy food right in the middle of communities of color, which often lack decent supermarkets and fresh produce. According to a report from the National Institutes of Health studying trends in food insecurity from 2001 to 2016, “food insecurity rates for both non-Hispanic Black and Hispanic households were at least twice that of non-Hispanic white households.”

Covid-19 has given food justice issues new urgency, as food insecurity rates among households with children have “sharply elevated – particularly so among Black and Hispanic respondents,” according to the Northwestern Institute for Policy Research.

But here in Oregon things are changing. “The interest in urban farming has grown threefold” in this region, says Eddie Hill, co-director of the Black Food Sovereignty Coalition, a nonprofit organization that works with BIPOC (Black, Indigenous and people of color) growers. The number of Black-owned farms within 50 miles of Portland has doubled from eight to 16 during the last five years.

Hoover tells me that he came to micro-farming the way so many others have: through networking and on-site learning. While working at the Oregon Food Bank he met Art Shaver and Shantae Johnson, who invited him to visit their farm, Mudbone Grown. He put himself to work.

Shaver and Johnson are at right at the heart of some of the changes taking place here; the couple’s Pathways to Farming training program is well known throughout the area. After talking to Hoover, I want to find out more about this new wave of farmers, and so I go to meet them on their eight-hectare (20-acre) farm in the lush hills outside of Portland.

Sitting inside an industrial-size tent, light rain tapping, they tell me they had wanted to farm for years. If you shake an African American family tree, a farmer is bound to fall out of it. Hoover has family who were land stewards in Texas and Tennessee. Johnson, 42, and Shaver, 46, grew up farming. Johnson’s grandmother had a seven-acre farm in Oregon City that would visit; Shaver’s grandmother had a small farm in Texas. His job was to ladle boiled fish guts, a rich soil additive, among her rows of carrots and cabbage. It made them feel grounded.

“We just wanted to have some land, work it with our kids,” says Johnson, a gentle, curly haired woman who is on the Oregon Board of Agriculture.

“We started talking about homesteading like our ancestors did,” adds the lean, bespectacled Shaver, two-dozen chicks in a box at our feet.

The couple, who now have six children, discounted farming because of the racism that meant farmland was passed down from white family to white family and denied to people of color. But they kept going back to the dream. In 2016, they cobbled together $5,000 to join Oregon State University’s Beginning Urban Farmer Apprenticeship, an eight-month training program for aspiring farmers. They left it halfway through.

“Some of the stuff I was paying to learn I had already been exposed to through my grandparents,” says Shaver. “We were like: ‘Let’s quit and go out and do this on our own.’”

Even with access to land, farming is prohibitively expensive. The couple scrambled to make it work, using food stamps to buy seeds and starts to grew bushels of food in a garden at their Portland rental apartment. There, they began to teach school-age children about land sustainability and to share skills that could help them in the job market. 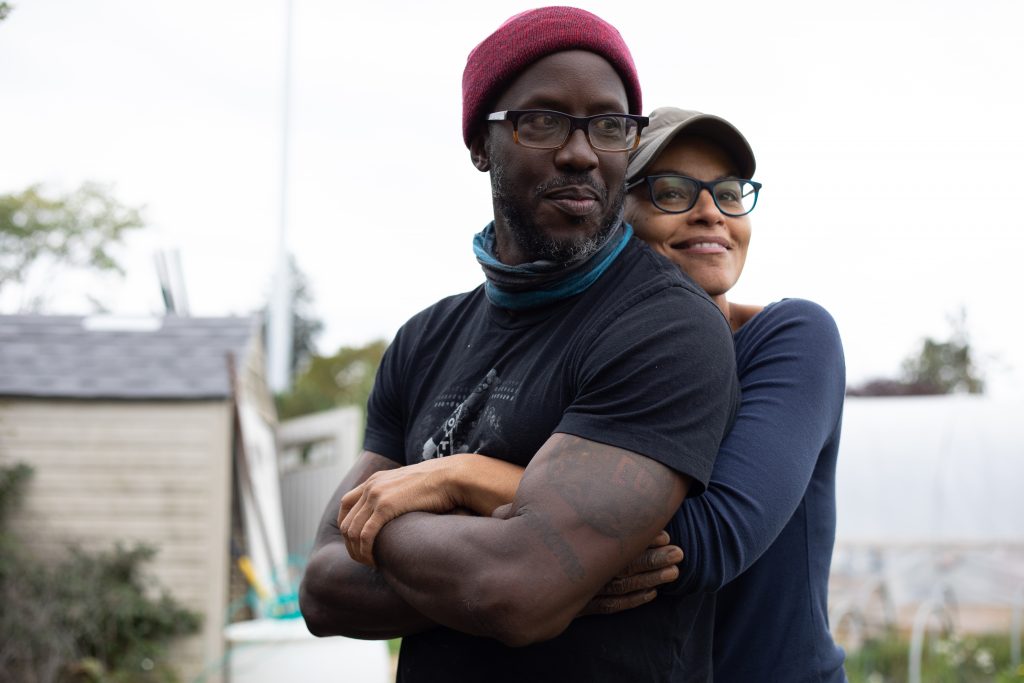 In 2017, the Oregon Food Bank offered them more acreage in Portland. They also launched the Pathways to Farming incubator program, designed to teach agriculture to prospective farmers. In 2019, they leased their current peri-rural space. His and Johnson’s place lies in the lush green hills of Oregon. The winding paths between properties in this setting calls lots of things to mind. Slavery is not one of them.

A commitment to teaching others is crucial to the continued growth of Black farming. At the moment, there seems to be no shortage of people eager to learn. When Mudbone expanded last year, 99 Black Oregonians applied for its 10 open positions.

When I revisit Black Futures Farm to see how Hoover is doing, he tells me a group of five volunteers have showed him how to build a needed irrigation system.

“Having regular water … is the earmark of a serious farmer,” says Hoover. “When I [first] thought about working on a farm, I was like: ‘Shit, that’s like slavery.’

“Working out in a hot field for hours and hours at a time, that’s what I equated farming with. Now, having my own farm has taken me much further back than slavery. I’m an African.”

Intisar Abioto is a photographer, writer, and dancer based in Portland, Oregon.