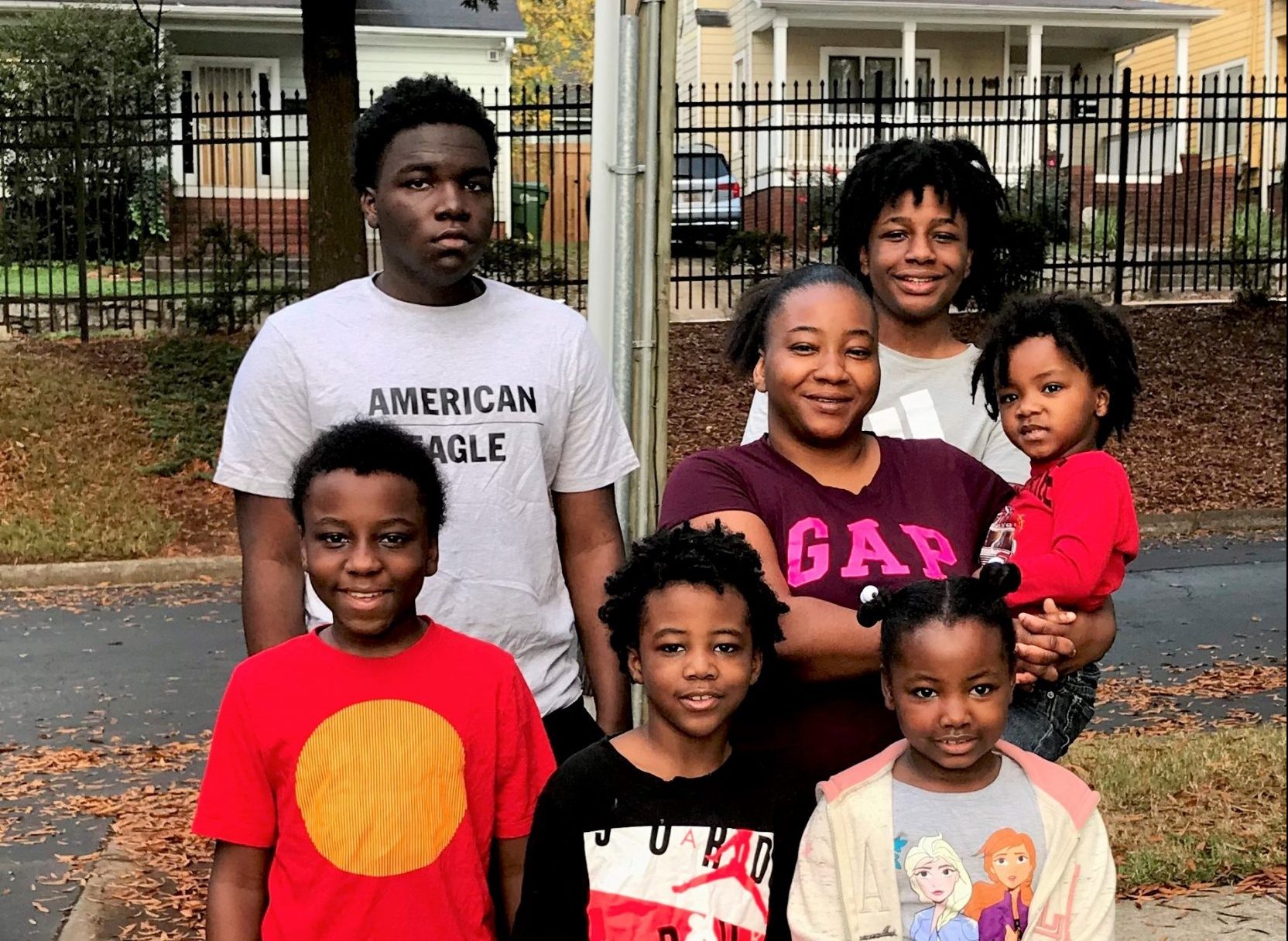 Marie McCauley and her six children outside their apartment in Summerhill. McCauley lost her job at a day care center and now works part-time cleaning houses and offices. Photo by Jill Jordan Sieder
Families, The Pandemic

Listen to this story:

Marie McCauley knows how to juggle a lot in one day.   Before Coronavirus struck in March, she held down two part-time jobs—one at a daycare, and another cleaning houses.  Now she manages remote schooling of her six kids.

They range in age from 4 to 17, including her 9-year-old son with ADHD.  She says each school day presents a new challenge.

“All six kids are doing something very different,” she says.  “With a lot of kids your head’s gonna be spinning! Wait a minute, slow down!”

McCauley says her main job now is keeping her kids safe from Coronavirus.

“We don’t let our kids go anywhere,” she says.  “Not to the store, not to the park, not nowhere.  The only place they go is on the back porch, to have some sunlight, run and play with the balls. Then they come in and wash their hands, change their clothes, because we’ve been outside.”

She is reluctant to send her kids back to school in January, when Atlanta Public Schools plans to phase some students in.  “If they go back, I’ll be really scared,” she says.  “Covid is real, it’s still out here.”

Like many working mothers in the age of Covid, McCauley’s new housebound life presents serious constraints to earning income.  Her family’s fortunes have turned like a ferris wheel over the past year.  Last December, her family had just enjoyed a big housing upgrade, moving from a motel to long-coveted subsidized public housing in Summerhill, near downtown Atlanta.

“Our kids were happy, because we’re in a four-bedroom home now, you know?” she says.

Between her two jobs and her partner Emory’s earnings from painting houses, they could just afford to pay for rent and food, and to keep gas in the car they shared.  And then Covid-19 came, and both parents lost their jobs. With no savings and bills mounting, they worried they’d lose their new home.  And then they began to receive almost $1600 per week, collectively — $372 from Georgia Department of Labor, and $600 each in federal unemployment assistance.  McCauley says it saved them.

“It helped a lot. We was paying rent on time.  We paid light bills and stuff on time. We was able to get our vehicle insurance paid.  And we was able to get extra food in the house.  And our household products.  And our kids clothing. We felt good!”

In fact, the federal aid they received through July served to lift the McCauley family out of poverty and close to the level of a living wage for the first time in 17 years. For four months, they each received the equivalent of $20 an hour – about what economic experts calculate a family with 4 or more children should earn to cover basic household expenses.

Sterling Johnson, manager of Economic Inclusion at the nonprofit Partnership for Southern Equity, says the extra federal aid not only provided crucial support to millions of out of work Georgians facing dire need.  He says its impact helps to make the case for continuing to provide a better wage and safety net to low-paid workers.

“What this has done for a lot of individuals is that it provided them with access to resources to live a livable wage lifestyle,” he says.  “And providing them that access gave them at least for a short time a leg up and an opportunity.”

He notes that case studies show that people did not waste their aid money.

“They took that money and made something better for their life and circumstance that made their day to day operation and way that they live better,” he says.  “And sustainable.  People didn’t go buy $600 of lottery tickets.  They paid bills. They paid down debt.  They saved a little money.  You know these are responsible things that people should have the ability and capacity to do.”

Indeed, a study by the Federal Reserve released in September found the primary impact of the unemployment supplement was to provide families the funds needed for essential purchases. It also served to sustain the overall economy and boost employment.  Similarly, economists at Yale found no evidence that enhanced jobless benefits disincentivized people to return to work.

But that’s not the prevailing view among many conservatives. In Congress, Republicans have pushed to cut weekly unemployment benefits, from $600 to $300 a week.  The relief bill now moving through Congress will extend federal unemployment benefits at that reduced level for 11 more weeks — just as they’re set to expire on December 26.

Here in Georgia, Labor Commissioner Mark Butler says he’s leery of providing too much support to the unemployed.  “I think Congress has got to be very careful in what they pass and what they do, to make sure they don’t do something that impedes getting the nation and the state of Georgia back on its feet,” he says.

Butler says he’s not a fan of the $600 weekly payments provided to jobless Georgians earlier this year.

“If you take a look at the $600, that may have been too high or too simplistic of a method,” he says.  “It probably would’ve been a smarter play if they said ok, whatever unemployment is in your state, whatever the amount an individual would normally get, we’ll match it.  I think that would have been a much better formula to help individuals out then just a blanket $600.  The purpose of unemployment–it’s not to exceed somebody’s pay scale.”

Butler notes that about 75% of people in Georgia receiving state unemployment through August made less than $10,000 per year.

“Which means that they were taking a lot of part-time, temporary jobs.  Well, they went from making $10,000 a year, to when they had the extra $600, they could have been right at a $30,000 a year equivalent.  And maybe one of the side effects is, now that they’ve seen what that’s like, they’ll say, I want to go find that.”

He could be talking about Marie McCauley.  She made $9.50 an hour at her part-time daycare job. And she earned $150 a month from cleaning houses.  That added up to about $10,000 a year.  She got only $70 a week from the state, until her unemployment benefits ran out this month.  The extra aid money from the feds is what dug her family out of debt.

She says she’d love to find a better paying job, but her constant child care duties now limit what work she can do. But two mornings a week, she leaves her future mother-in-law to supervise the kids, and goes out to clean a house or office building. When she can, she joins her fiancé Emory on a construction job.

“I assist him with drywall or sanding,” she says.  “And then, after he paints, I’m the cleanup lady.”

This part-time work got harder for both of them to pull off when their only car died recently. Emory is now looking for jobs on the MARTA bus lines still operating intown. (Seventy bus lines were cut last spring, and have not been restored). Marie says the resumption of federal aid would go a long way to restabilize the family finances.

“We’d be able to have a car right now.  And then keep up with the bills, and be able to provide for the kids the way they need to be provided for.”

Sterling Johnson says many legislators and policy makers just don’t get what some low-income people are up against.

“There’s always this argument against livable wages, and against doing the right thing for the right reasons economically, as though it’s giving people something they don’t deserve,” he says.  “That’s an argument framed through stereotypes and tropes around poverty – we think of poverty as a function of laziness and people who make bad decisions.  When in reality poverty is a function of different systems of inequity and inequality working in a lot of different ways.”

Welfare advocates say the best outcome for impoverished families like the McCauleys would be to extend cash aid now, while the pandemic persists.  And later on, to provide them with job skills training and other support they’ll need to earn a living wage on their own. 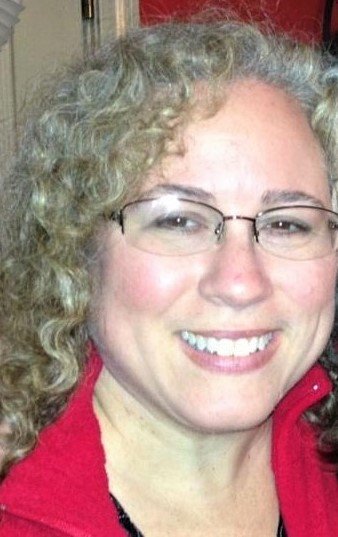