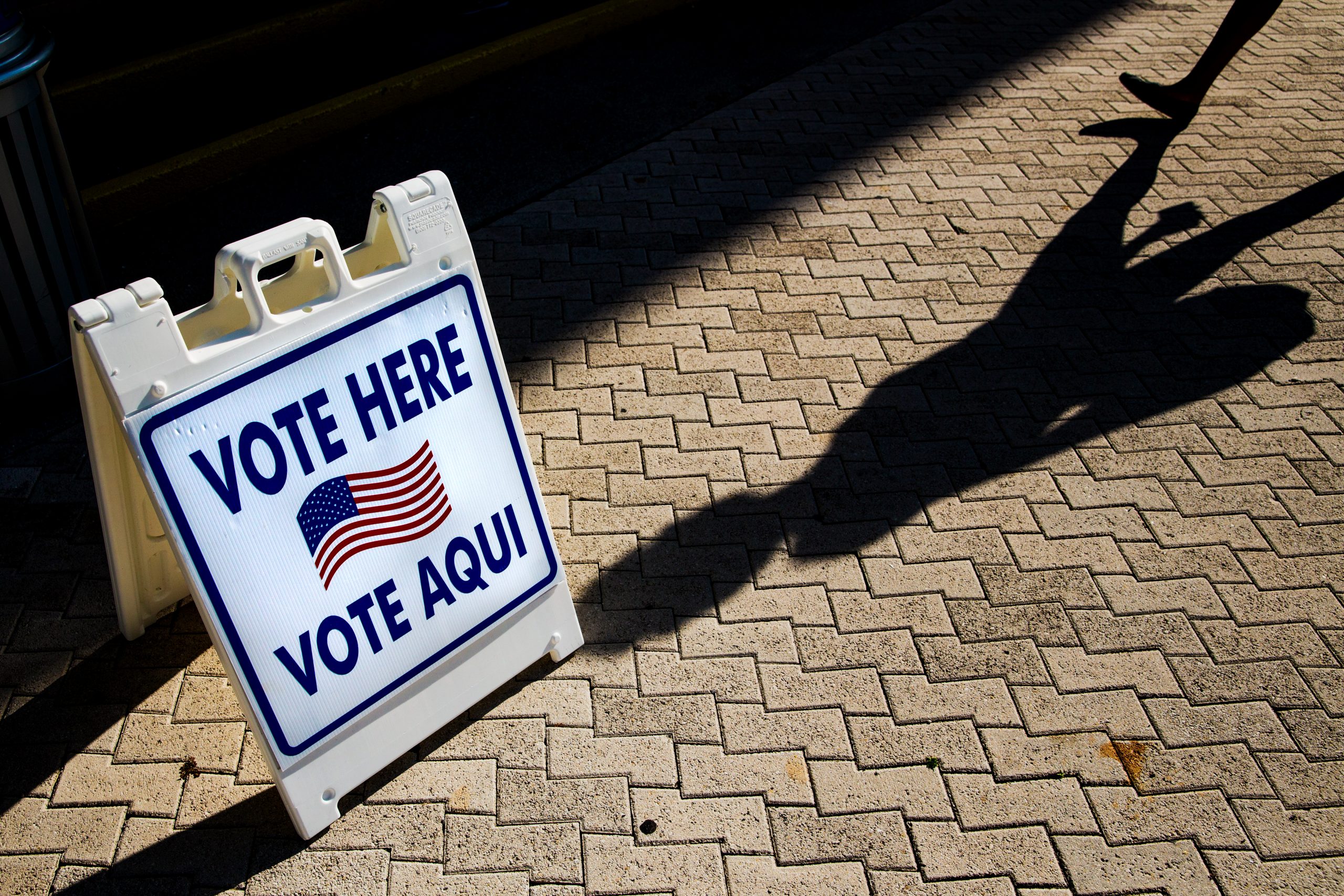 Photo by Bloomberg Creative via Getty Images
Inequality, The Pandemic

Don’t Exoticize Latino Voters; Report on Them as Americans

If a candidate for high office carries a group of voters by more than 30 points, when do we call it “a loss?” When that same candidate flips five states his party lost in the last election, how hard do reporters have to work to find the stories of the ways he really “fell short”?

Joe Biden won the Latino vote nationwide by a two-to-one margin, in a result only somewhat different from Hilary Clinton’s in 2016 and Barack Obama’s in 2012. However, from the news coverage, casual observers might conclude that the largest ethnic minority in the country—Spanish speakers and their descendants—are the new “problem child” for Biden and the Democratic Party.

They aren’t. Not yet, anyway.

Reporters are trained, through practice and habit of mind, to look for patterns, to detect anomalies, and to highlight exceptions rather than rules. On most days, it works. As I watched the unfolding story of the 2020 election and its weeks-long aftermath, I wondered whether relentless application of that training, added to long-held stereotypes, forced the news business into questionable story lines about the Latino vote.

President Trump lost the Latino vote, just about everywhere in the country, and in many cases by enormous margins. The troubled census will likely count the number of self-identified descendants of the Spanish Empire in the New World in excess of 60 million people—approaching one out of every five Americans. More than half that number trace their ancestry to Mexico and the parts of the U.S. that once were Mexico. They are by far the largest single national origin group in that 60 million. Mexican-American voters chose Joe Biden by a roughly 74-23% margin.

What I saw leading up to and after November 3 were problems I often see in reporting on the Latino vote. Across the country—from a college freshman in the Bronx to a small business owner in San Antonio to an auto mechanic in East LA—Latino voters tell pollsters they fret over access to and cost of health care, the quality of K-12 education, the cost of college, and the ability to find a good job at decent pay.

Is immigration an issue? Sure, it is, further down the list. However, too many stories about Latino voters put immigration at the center of their political universe, in ways that fail to recognize or explain that a majority of Latinos, and Latino voters, are native-born American citizens.

For broadcasters, there is the inevitable moment of “sound up” from a Spanish-language campaign ad from one side or the other, fetishizing that specific outreach as a sign of a candidate’s commitment to doing better among Latino voters. A minority of Latino voters base their ballot decisions on Spanish-language media, and the more interesting questions about how to reach the huge, English-dominant portion of Latino voters under 30 don’t get asked often enough.

If you set out to particularize, exoticize, make foreign a group of U.S. citizens, the stories you tell will do that, too. Latino voters in Los Angeles voted differently from those in rural Texas. The young voted more heavily Democratic than the old, and women more than men.

You know who else did that? Americans.

When a reporter is in a high school gymnasium in Phoenix, a suburban strip mall in Florida, or a bodega in Brooklyn, being aware of local detail is part of the job—and being Margaret Mead observing Samoans is not. Latinos in this country are already accustomed to being treated as permanent foreigners. They shouldn’t have to face it even when doing that most American of things: voting.

We’ve known for decades that older Americans vote more reliably than younger ones. We also know wealthier Americans vote more often than lower income citizens. Similarly, more educated voters head to the polls at higher rates than people with fewer years of school. It is no surprise therefore, that an enormous group of younger, less wealthy and less educated citizens are still working on turnout. Latinos aren’t shirking their civic duty as much as growing into it.

The just-completed elections are probably making different sets of political consultants reach for the antacid, or excitedly counting the days to the next primary. Instead of lazily falling into the “they don’t show up” story line, the smart money is analyzing results from Arizona, Pennsylvania, Georgia, and North Carolina.

Mastering the intricacies and diversity of a large, multiracial, population with roots in two dozen countries is interesting. But as reporters turn their attention to the inauguration, the confirmation hearings, and inevitably, the 2022 midterms, it makes more sense to look at Latinos and the pandemic aftermath.

Latinos are heavily urban, disproportionately represented in battered service industries, more likely to number among the sick and the dead due to the coronavirus, and more heavily represented among new graduates entering the labor force. Their political sentiments will be shaped by the trajectory of young families trying to get over in America.

The median age for America’s Latinos hovers around 30. The average American is almost a decade older. If you struggled to become the first member of your family to finish college and find yourself working alongside a cousin with a high school diploma, your view of the country and your future in it may significantly influence your vote, or whether you vote at all.

Reporters’ hunger for “man bites dog” stories can mislead. If a Republican nominee wins a majority among white voters, and loses among Black and Latino voters, is it a stretch to report that Latinos “denied” the Democrat a victory in, for example, Florida? By imposing their own impression of what was “supposed to” happen—a wider margin for the challenger—voters who delivered a majority of their votes for Joe Biden became puzzling, a subject for countless articles and cable panel chats.

I think you know the answer.

The second largest group of Latino voters are Puerto Rican, both island-born and living on the mainland or descendants of the people who’ve come here in past generations. They voted for Biden by a nearly 3-1 margin. Relatively smaller groups of South and Central American voters also gave a majority of their votes to the Democratic nominee.

One exception? Cuban-born and U.S.-born Cubans, roughly 4% of the Latino population nationwide, who have voted Republican for decades. Even in Florida, where Cubans have long constituted a potent, pivotal force in state politics, Biden won the Latino vote, if by a smaller margin than elsewhere in the country.

In Texas’ Rio Grande Valley counties, Joe Biden won, by clear margins, over Donald Trump, though by less commanding margins than those posted by Hillary Clinton in 2016. In the state’s giant urban areas, including some of the country’s biggest cities, Latinos overwhelmingly cast their ballots for the Democratic nominee.

Still, “underperformance” in a Texas loss became the metanarrative. That became the story even as tens of thousands of newly registered Latino voters, voting for the first time in a presidential race, overwhelmingly supported Democrats, made Texas closer than it’s been in decades, and points to future races where that vote and its potential will merit more attention from both parties.

Is the Rio Grande Valley a story? Of course it is. Are Florida Cubans and Venezuelans part of an important story to tell about the outcome in that vital electoral prize? No doubt. No hay duda. The degree to which those voters responded to a conservative message in general, and the threat of “socialism” making America like Cuba or Venezuela in particular, are definitely part of the story. Both parties will study those results in advance of the next election.

However, some of this coverage is no more or less than the result of choices, of narrative lenses the news business imposes on a story to make it novel and interesting. A Democratic candidate pulls Arizona into the win column for the first time in decades after massive Latino organizing? How about we talk about the places they fell short? How about we talk about the things we expected to happen, but didn’t?

Look at the numbers: Latino voters didn’t “deny” Biden a Florida victory. White voters, still more than 60% of the voting population, pulled the state into the Trump column by giving the president a 25-point victory.

Accept Latino voters as Americans. Cover the splits and tensions as you would those in any group of voters. And the next time you type that hoary old line, “not a monolith,” drop a buck in your newsroom’s cliché jar for “fines.”

Ray Suarez is the co-host of “World Affairs” on KQED-FM and public radio stations nationwide. He’s the author of “Latino Americans: The 500-Year Legacy That Shaped a Nation” (Penguin, 2013).