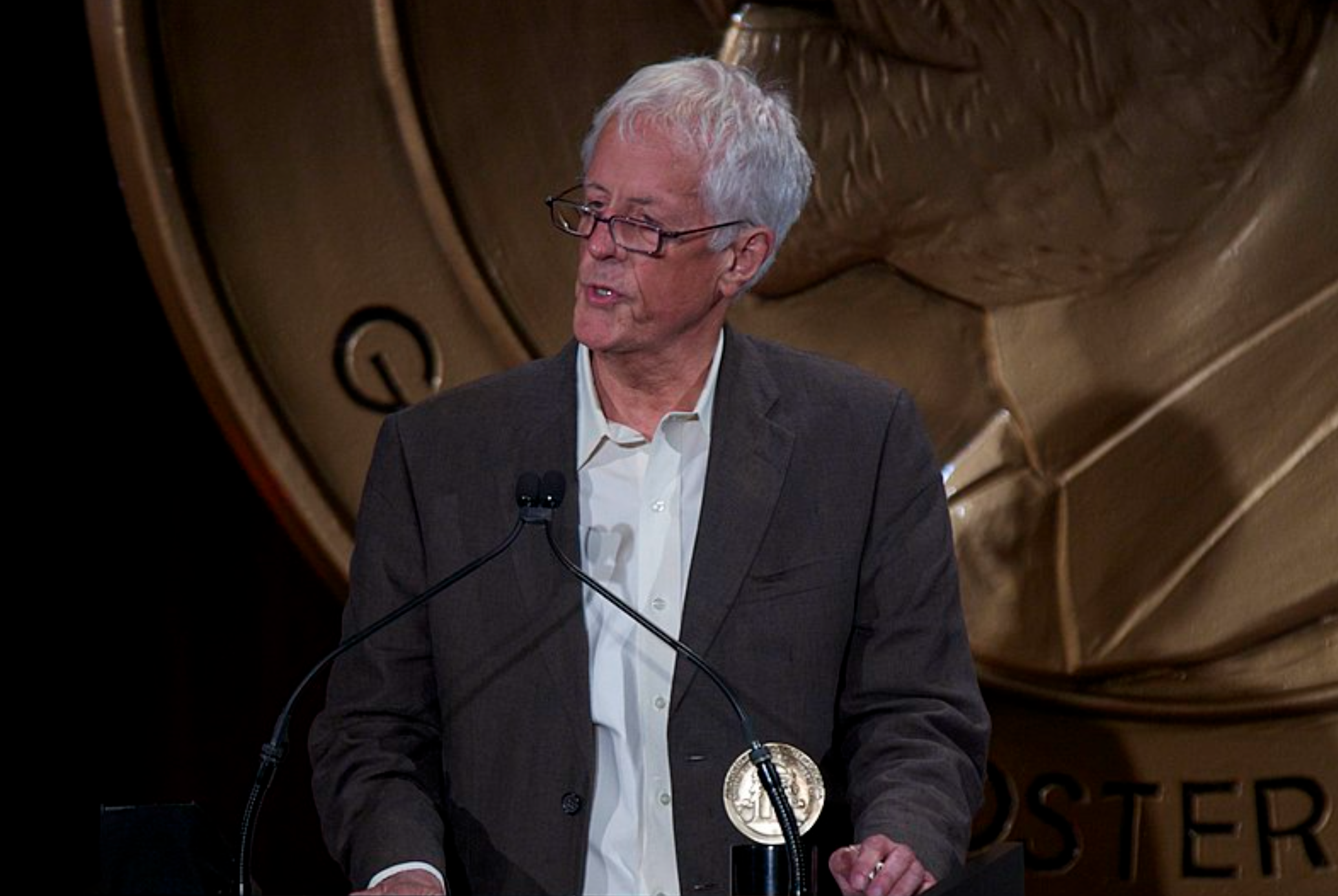 Photo by Anders Krusberg for the Peabody Awards
Culture

When the director Michael Apted died at 79 years old on January 7, social media lit up with remembrances. He had directed many films, including Coal Miner’s Daughter, and more recently, prestige shows on premium cable, but fans mourning him were uniquely oriented toward one of his efforts, the Up series. “Give me a child until he is 7 and I will show you the man,” was the first of the series, 7 Up’s maxim. To make good on that saying, for the 1964 short TV program 7 Up, Apted interviewed an assortment of 14 English boys and girls who were all 7 years old. He then returned to them every 7 years, until the last edition, 63 Up, in 2019. It was the greatest documentary television series of the last century.

The Up series was a crucial endeavor for two reasons. By following these Britons for 56 years, Apted’s Up series shone a unique and sometimes devastating light on how people’s fates are decided, as much by social attitudes and class as by their character or grit. But the series did something else. It adapted and helped to further the form of documentary naturalism. In literature, naturalism means classic novels like Sister Carrie or Germinal that follow characters for years or even their lifetimes, with a special interest in how society and its biases form them. Think of its method as mega-realism, with the clock set for fifty years rather than, say, an election season or a short, miserable marriage. In contrast, most television and even film documentaries sometimes interview their subjects for a single sitting, with interview subjects often wearing the same jacket or pearls in every clip. Naturalistic works also tend to feature a wide range of characters across the class spectrum, and the Up series did this as well, following children who attended posh schools and those who grew up in an orphanage: The aim was not just reproducing life but commenting upon it.

The Up series showed audiences a story played out over a lifespan, with the people in the story changing and aging in real time, long before similarly ambitious experiments in American fiction film, like Richard Linklater’s Boyhood and the Before trilogy films. In the former, Linklater filmed a boy and the actors playing his parents over the course of twelve years, creating a single film of wrenching temporality and power; in the Before series, the director filmed actors who played a couple over 25 years in three different films. Far more modestly, the Up series changed my own life, affecting how I reported and wrote non-fiction, and how I understood how we become ourselves.

How did a British director making a black and white short for Granada TV in 1964 about school children create a masterpiece, and shape a whole genre? Apted’s initial Up television documentary had him interviewing Symon and Paul, who were living in an orphanage; Jackie and her two working class girl friends; and three upper class boys, among them public schoolboy Andrew Brackfield who at 7 said he liked to see how his shares were doing and that he would study at Oxford. What was remarkable, though, was that what happened next. Apted pursued these people’s stories, visiting them at intervals. Over the years, it became a melancholy exploration of advantage and disadvantage, of the nub of personality and the casing of class identity, and the arrow of chance. The filmmakers shot in London, the Lake District and Liverpool, with the same cameraman shooting, deploying a bland yet probing visual style.

The results could be predictable, occasionally shocking, and sometimes sorrowful or luminous. Up, in other words, combined the loftiest reaches of the sociological imagination and the grimiest depths of reality television reunion specials. The show raised questions like: Is there more class mobility in Britain than America now? But also: Would Linda find love? Would Neil be living as a nomad? (Up’s subjects were not representative of British society in terms of race or gender but are more varied than the typical selection of subjects in the early 1960s.) Working-class Tony, who had been a loud and cheery boy who aspired to be (and briefly worked as) a jockey, learned “the knowledge” and became an East End cab driver, making a solid living for himself. It seemed he had exceeded his parents’ lot, until the 2008 financial crisis tore his fragile economic stability apart. Tony was not bailed out like the banks. He mortgaged his house and went into debt. At 63, though, he had apparently regrouped, and appeared reasonably content, though he still had to work as driver. Up’s naturalism showed that for Tony and others, so much of what we think of as our singular obstacles and failures simply are not. Rather they are societal and systemic, and in the case of illness and death, universal and existential.

Andrew, one of the upper-class trio, did, in fact, go to Oxford as predicted and then on into finance. But sometimes there were zig zags. The clever farmer’s son from Yorkshire, Nick Hitchon, defied social class determinism and became a physics professor: He left for America at an early age and taught at University of Wisconsin-Madison. And yet, when we last see him at 63 he is very ill with cancer and his second wife is caring for him. And then of course there is Neil Hughes, who had gone from being a wildly imaginative middle-class little boy to a depressive adolescent to a man struggling with homelessness. He ultimately became a local government representative. He was what I feared I could have been if I had gone quite wrong. He told the Guardian that he sees himself as a complete failure.

Each set of interviews raised the questions of what defined individual destiny. Apted never hit us over the head with this reckoning during the series. But it was hard to forget, as I watched them starting with 28 Up in the middle of the 1980s, that the social safety net was unweaving. In Thatcher’s England and Reagan’s America—I grew up in London and New York City in the 70s and 80s—our countries were beginning a process of privatization of as many social services as possible, including finally, the privatization of the self. Thatcher would say, “There is no such thing as society” just “individual men and women and there are families,” but Up showed that there was a society and class, gender, and race still set people’s expectations and created or limited their possibilities, alongside individual will. Apted’s rigorous and unique longue durée method was a perfect tool for exposing this post-1979 rise of income inequality and rampant individualism.

For many of the characters of Up, how their lives turned out—for good or ill—was not even mostly their fault. In fact, the slow burn of Up did not just show which ones thrived and which ones merely survived, but it also revealed the limits of contemporary mobility. In the U.S., the probability of a child born to parents in the bottom fifth of the incomes reaching the top fifth is 7.5 percent. In a supposedly much more class-hardened England, the mobility rates are actually slightly higher, though not by much: only 9 percent, according to research by economists Jo Blanden and Stephen Machin. The installments of Up every seven years offered far more than simply viewing the dry tragedy of economists’ graphs and kept viewers from normalizing stumbling blocks of the films’ subjects as theirs alone. Neil supposedly lost his way and became a squatter due to a “nervous complaint,” but did he in truth receive the help he needed?

It’s a method and a message that’s particularly important today, a time when hordes of American and British citizens want to cut themselves off from the globe (Brexit) or from tens of millions of other Americans (Trump loyalists). These citizens see themselves as utter individuals not as products of a society. The consequences have been dire.

The series was also an argument about non-fiction, of how important duration or time is when we tell people’s stories, not just spending hours with subjects in a concentrated way but spending years upon years with people. 7 Up taught me the value of revisiting subjects in this fashion so that when I wrote books, I followed a mini-Apted method and let the subjects’ stories define my books’ timing. For instance, I might return to the same subjects multiple times over the course of roughly five years. I also always sought out people from a range of backgrounds as Up did, to at least attempt an “in the round” effect.

Like many Up superfans, I was hoping that there would be a 70 Up. I was looking forward to hearing Apted’s stentorian and sometimes sarcastic voiceover prodding and clarifying his subjects as they discussed their retirement plans, their knee replacements, their septuagenarian divorces or marriages, their “olds” reunion album or their later-life revelations. I awaited the images of contentment written across the faces of some and fear across others. But it was not to be, at least not under Apted’s watch. The comfort that remains, of course, is that Apted had the amount of time he did to make Up. To paraphrase the series’ motto: Give me a documentary made over 56 years and I will show you a society.

Alissa Quart is the Executive Director of the Economic Hardship Reporting Project and author of Squeezed: Why Our Families Can’t Afford America.