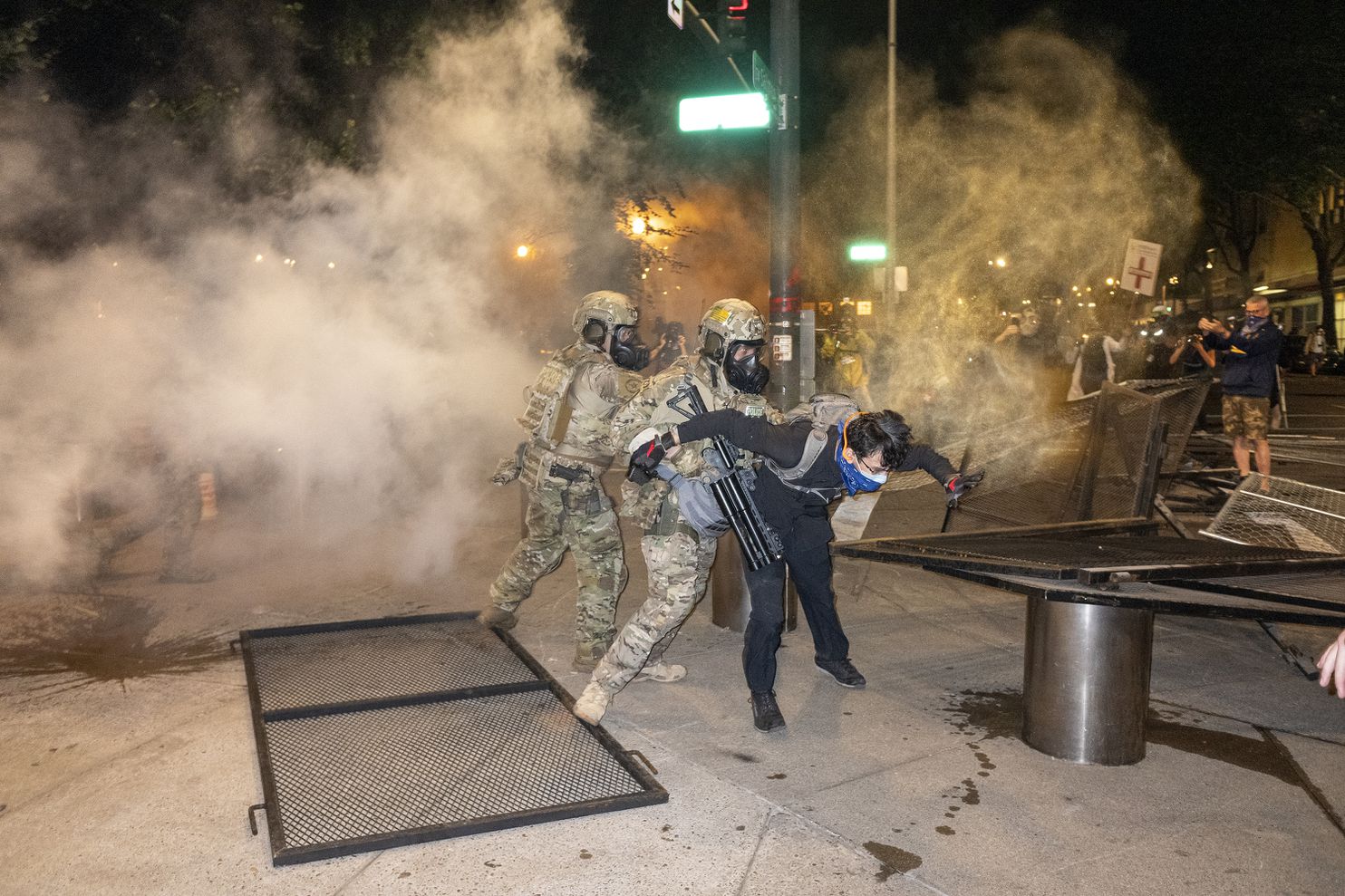 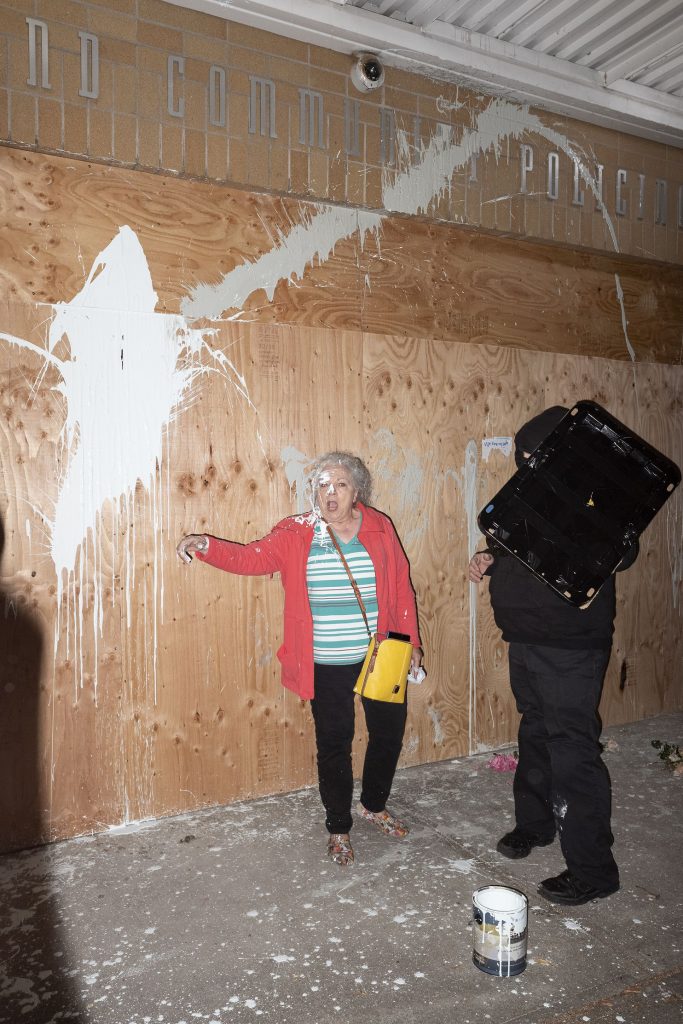 A resident argues with protesters outside the Portland Police Bureau’s East Precinct after a fire was set and paint splashed across the building’s boarded-up facade on Aug. 6. Photo by Rian Dundon

I have been following Rian Dundon’s work for many years, starting way back when I worked as a photo editor at Time in New York City. His work has always been personal, a little raw and heavily stamped with his personal vision. He has never seemed to waver from that approach, from his extraordinary work during his time in China, showcased in his book “Changsha,” to his images working as a valet driver for a strip club in San Francisco.

Dundon’s photos from the ongoing protests in Portland, Ore., are no different. I think they are some of the best work covering the upheaval there. They are unflinchingly personal and, yes, raw. And this kind of work, in a time when budgets keep dwindling, making it more and more difficult to hire and highlight photographers with a strong sense of authorship, is becoming more rare. We are lucky to be able to showcase it here at The Washington Post, from work like Dundon’s to that of our staff photographers.

We are doubly lucky that Dundon’s work was first and foremost supported by the Economic Hardship Reporting Project, which made what we are presenting today on In Sight possible. Now, with all of that out of the way, I’ll let Dundon’s words and images speak for themselves.

“This summer, the main protest site in Portland was only about a mile from where I live. I would leave my quiet Southeast Portland neighborhood on foot, crossing the Hawthorne bridge at dusk to find myself transported into another universe. On the other side, under chemical clouds I found a twisted vision of 21st century urban warfare. Protesters carried homemade shields and paint respirators for protection, used leaf blowers to expel tear gas, and lobbed bottle rockets at officers who responded with high velocity impact munitions and deafening flash-bang grenades. Federal agents in fatigues were snatching people from the park and packing them into unmarked vans while the barricades erected to protect government buildings were relentlessly pressed upon by a writhing mass of bodies. I work with the Economic Hardship Reporting Project, a journalism nonprofit covering inequality in the United States, and though I generally don’t photograph breaking news I felt compelled to document the world events erupting in my hometown. Not even a pandemic could keep me away.

“And then they came for me. In the early hours of July 22, I was assaulted by U.S. Marshals while covering a protest outside the Hatfield Courthouse. Photos of the incident shot by journalists from the New York Times and Associated Press ran in newspapers around the world, and in a video online you can see me getting thrown to the ground as a group of officers bullrush across the sidewalk, casually dropping smoke bombs and canisters of tear gas as they go. One of the Marshals rips the press ID from around my neck; another pinned me under the gas with his nightstick for 10 excruciating seconds before allowing me to leave the area. I walked home with third-degree burns that night, bedraggled but buzzing on residual adrenaline.

“This was one of the many times — the worst time — that the protests felt like a medieval siege.

“Though protesters were effectively unified under the banner of Black Lives Matter, many were motivated by more personalized concerns. A lot of people were there to stand against the Trump administration’s aggressive intervention in local policing. Others focused their rage on Portland Mayor Ted Wheeler, whose deafness to protesters’ demands had been palpable from the start, or rallied more generally against systemic racism, capitalism, the patriarchy. Some just wanted to fight cops. A few embraced the absurd unreality of it all: one activist wore furs, a crusader helmet, and a black leather trench coat to the battle. Another frontliner called “trumpet guy” was known for bugling charge calls for his comrades as he rushed barefoot toward the police line. Summertime in the Pacific Northwest is also a break from the endless rain, and in some ways the protests were a covid-era replacement for nightlife in the shuttered city. Many were in it to document it: they were filming, photographing, and live streaming for the parallel conflict taking place online and in the media. The demonstrations were fertile ground for making pictures about the relationship between protest, performance, and surveillance.

“These pictures are from the first 100 days, when summer heat and communal rage combined to manifest action in the hearts of Portlanders. A lot of people ask me about the goals of the protests. ‘What do they really hope to accomplish?’ Abolishing the police, uprooting systemic racism, ending capitalism — the answer is bigger than most people can fathom. But to me the feasibility of protester demands is beside the point. Protest is spiritual, protest is spontaneous. It’s imperfect and joyous and sometimes maddening, but it means confronting the past and a threat to the status quo, both of which are powerful tools for change.

“On New Year’s Eve, activists staged another downtown rally outside the Multnomah County Justice Center. It was the biggest demonstration since Election Day, and the mood was celebratory as the first riot of 2021 was declared. ‘We did this to remind them that we still can,’ a smiling protester told me as the police line retreated from a barrage of paint balloons and fireworks. ‘We can do this anytime we want.’” 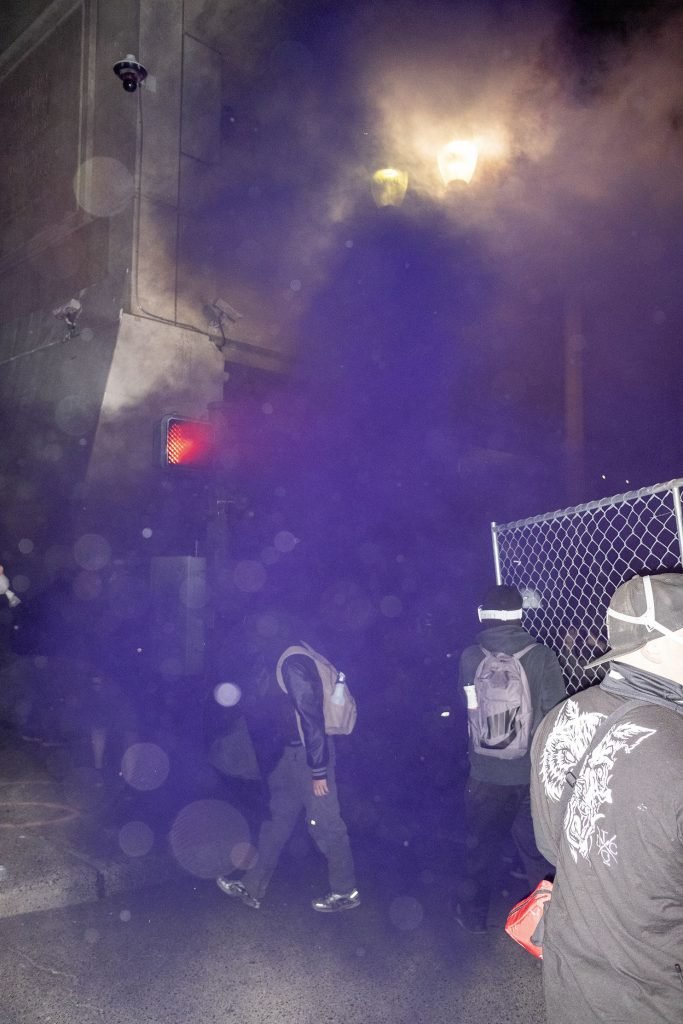 Protesters assemble barricades on July 17 outside an entrance to the Multnomah County Justice Center, where law enforcement officers are stationed inside. Photo by Rian Dundon 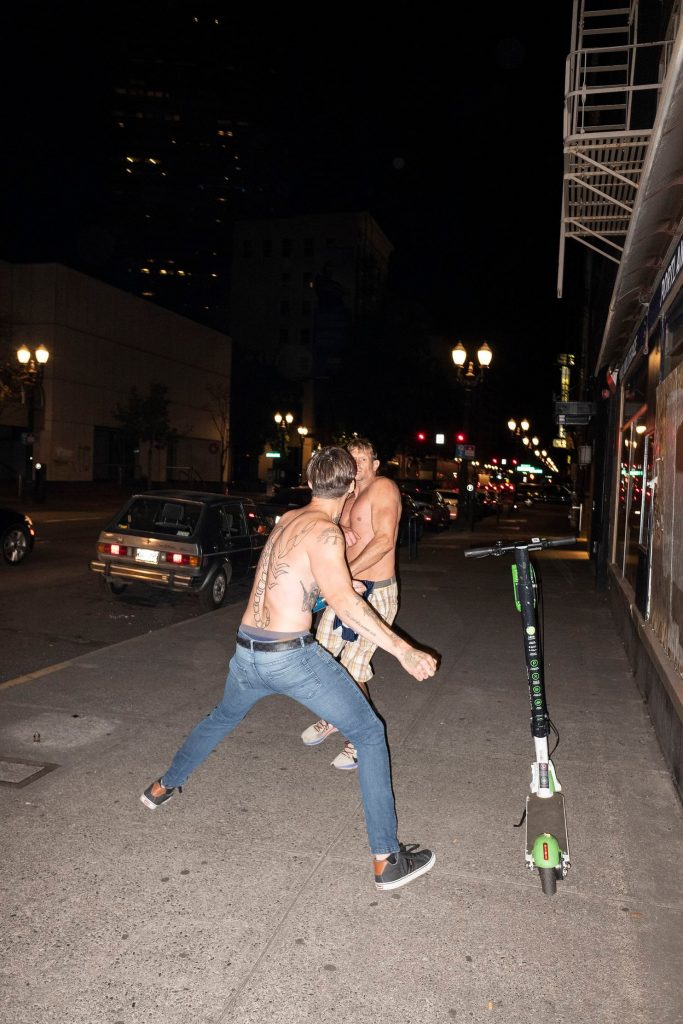 Two men fight in the street after a pro-Trump rally in downtown Portland on Aug 29. Photo by Rian Dundon 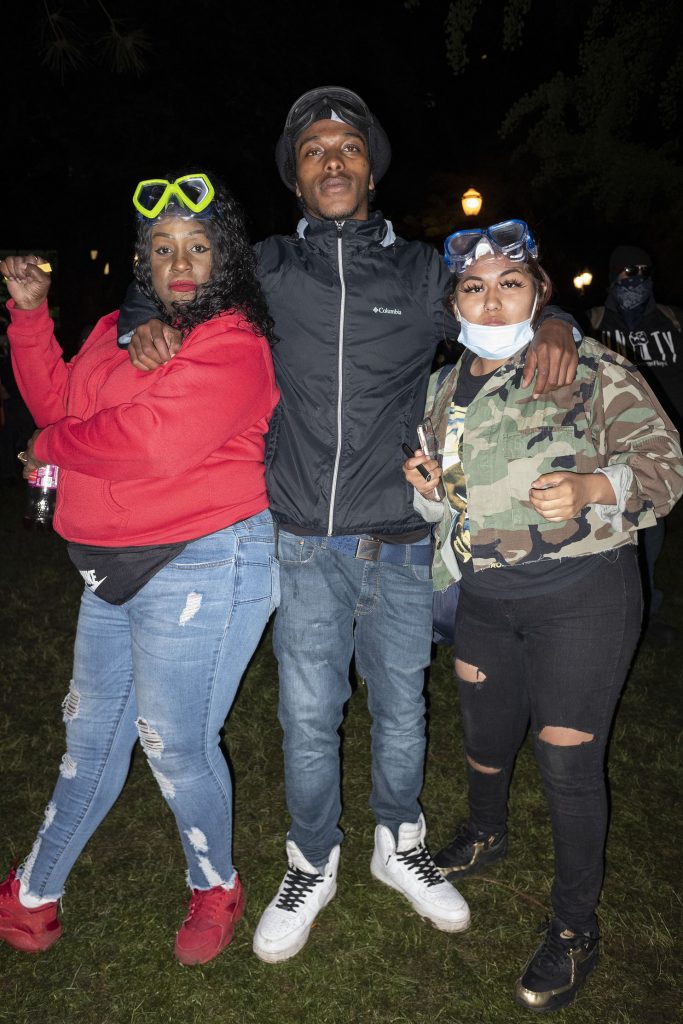 Protesters gather outside the Multnomah County Justice Center on June 6 to protest police brutality in the wake of George Floyd’s killing. Photo by Rian Dundon 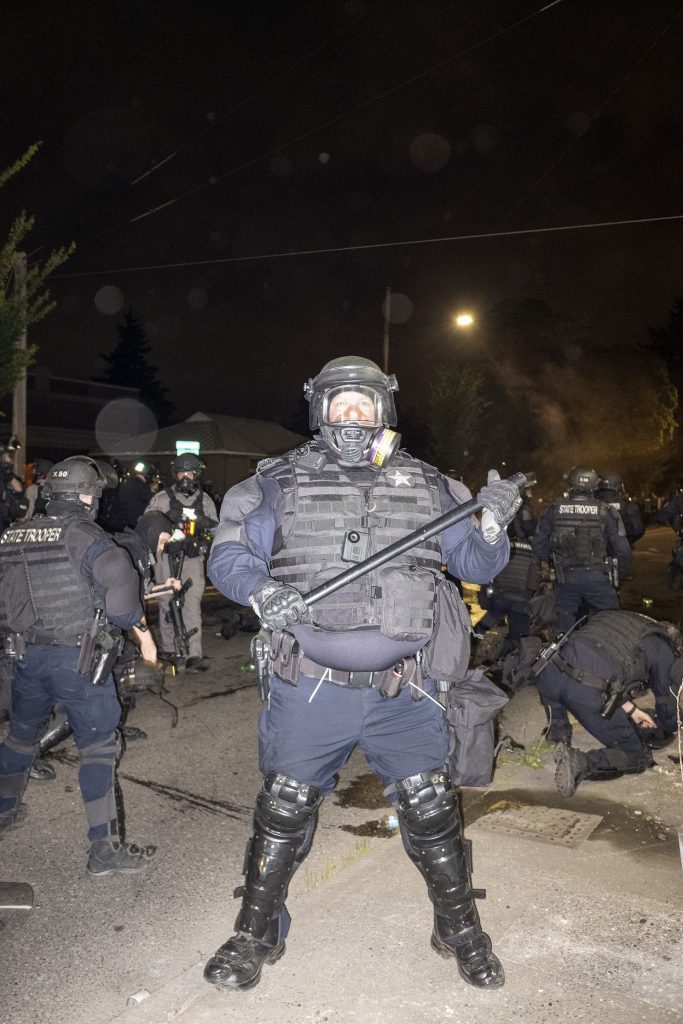 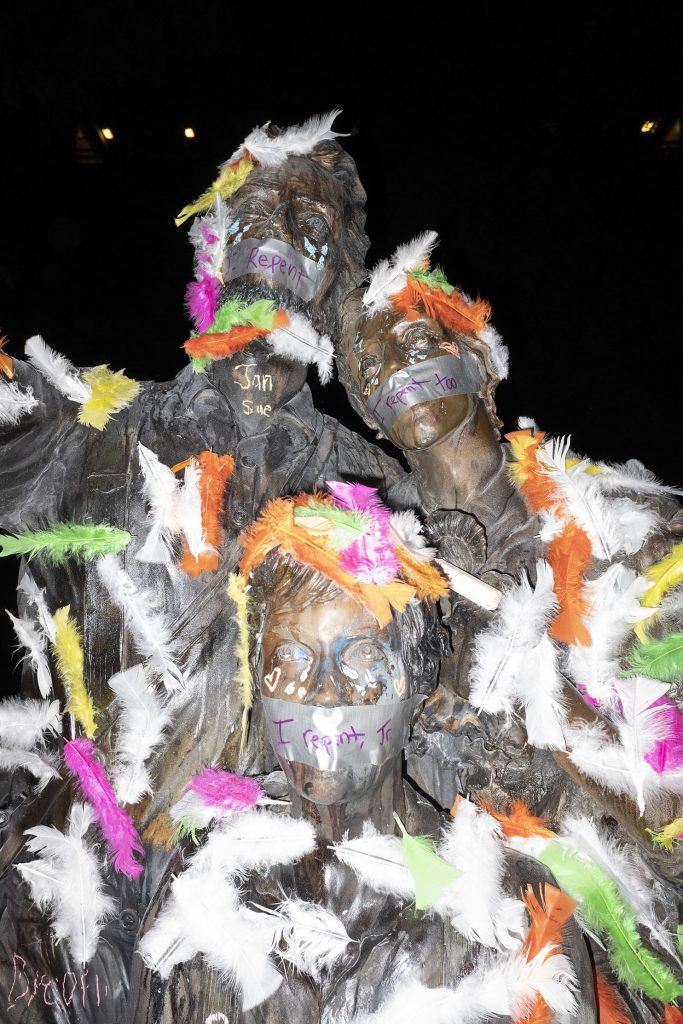 The Promised Land, a bronze sculpture commemorating the arrival of European settlers in Oregon, is defaced during racial justice demonstrations on July 7. Photo by Rian Dundon 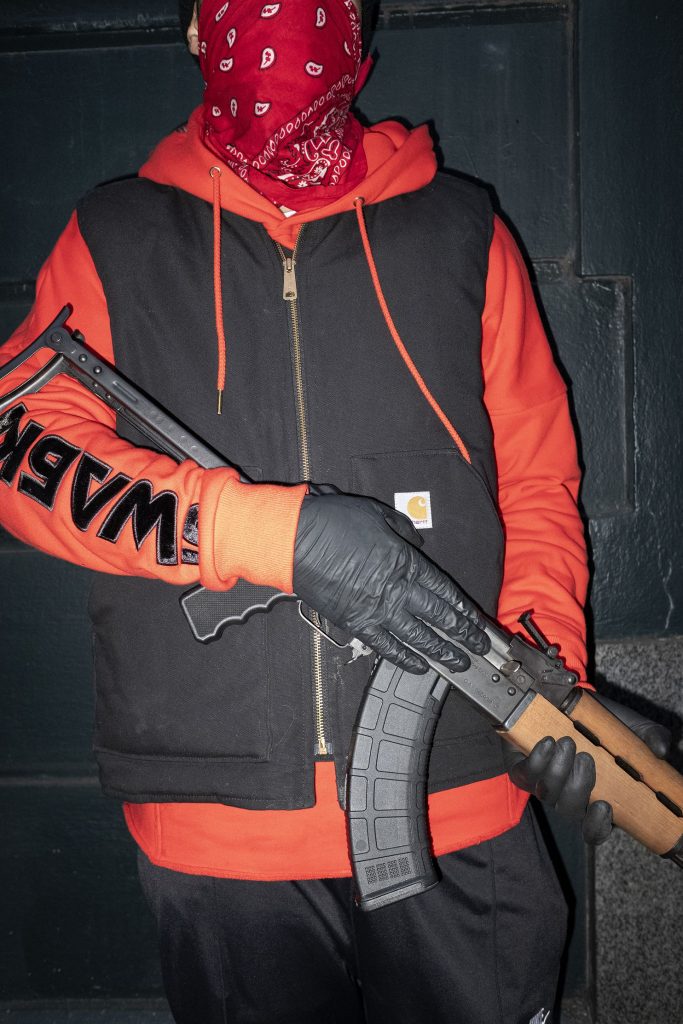 An armed resident guards his vehicle on May 31 during protests. Photo by Rian Dundon 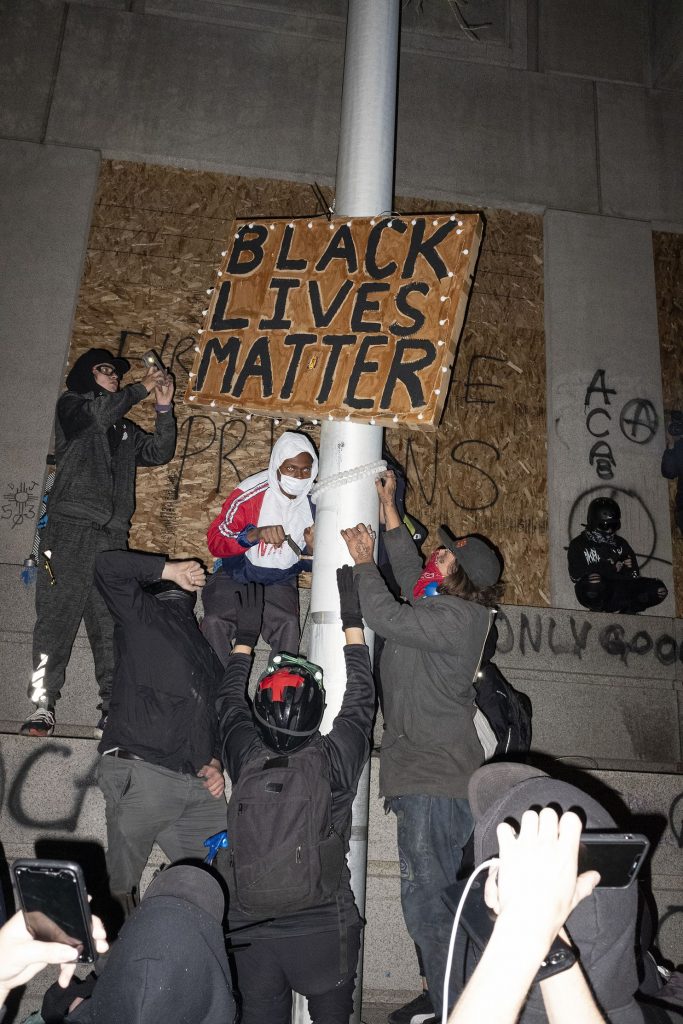 Protesters send a Black Lives Matter placard up a flagpole outside the Multnomah County Justice Center on July 27. Photo by Rian Dundon 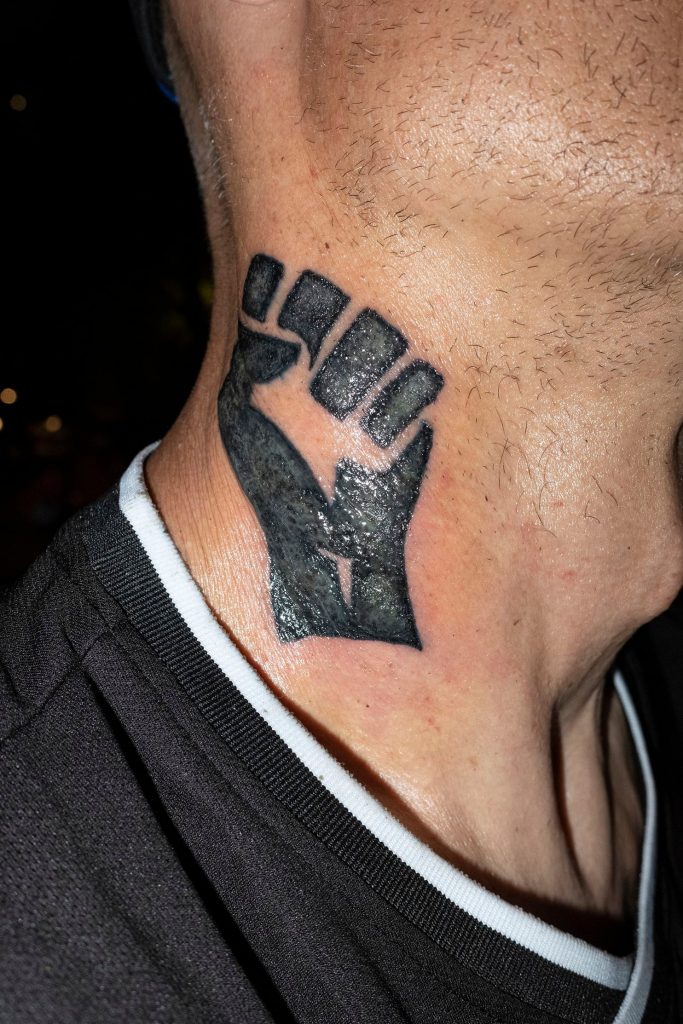 Anti-fascist activist Michael Reinoehl shows off his fresh Black Lives Matter tattoo at a protest on July 19. He was later accused of killing a participant of a pro-Trump caravan that drove through the city and was shot dead by federal agents as they tried to apprehend him. Photo by Rian Dundon 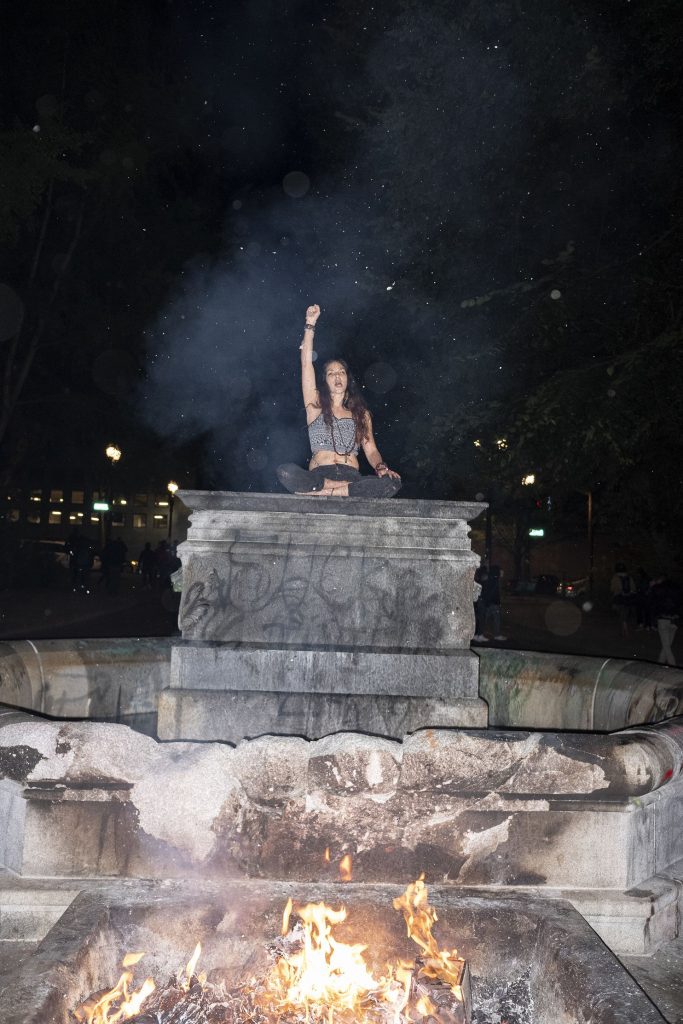 A Black Lives Matter demonstrator sits on the base where a statue once stood on July 7. Photo by Rian Dundon 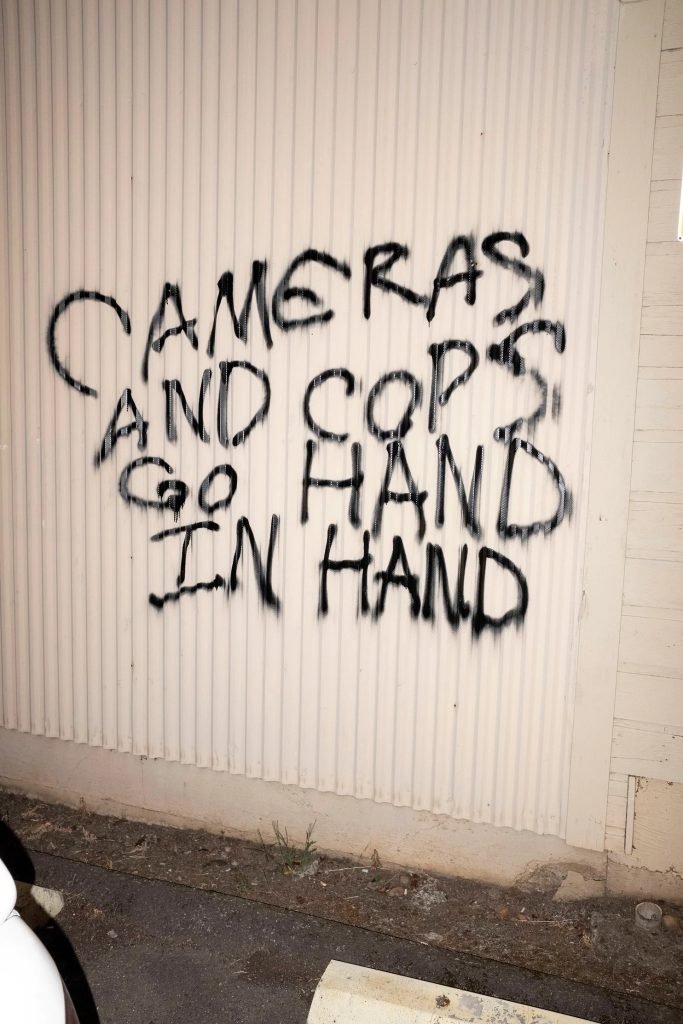 Anti-press graffiti at a Black Lives Matter demonstration near the East Precinct on Sept. 5. Photo by Rian Dundon 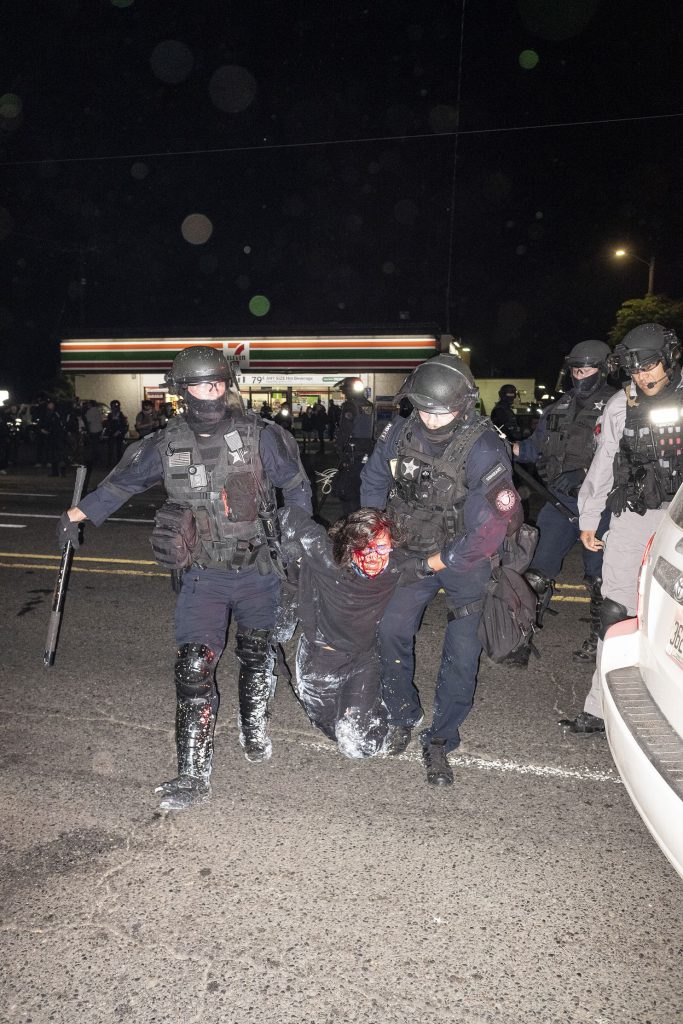 Oregon State Police take an injured protester into custody during a demonstration outside the Portland Police Association on Sept. 4. Photo by Rian Dundon 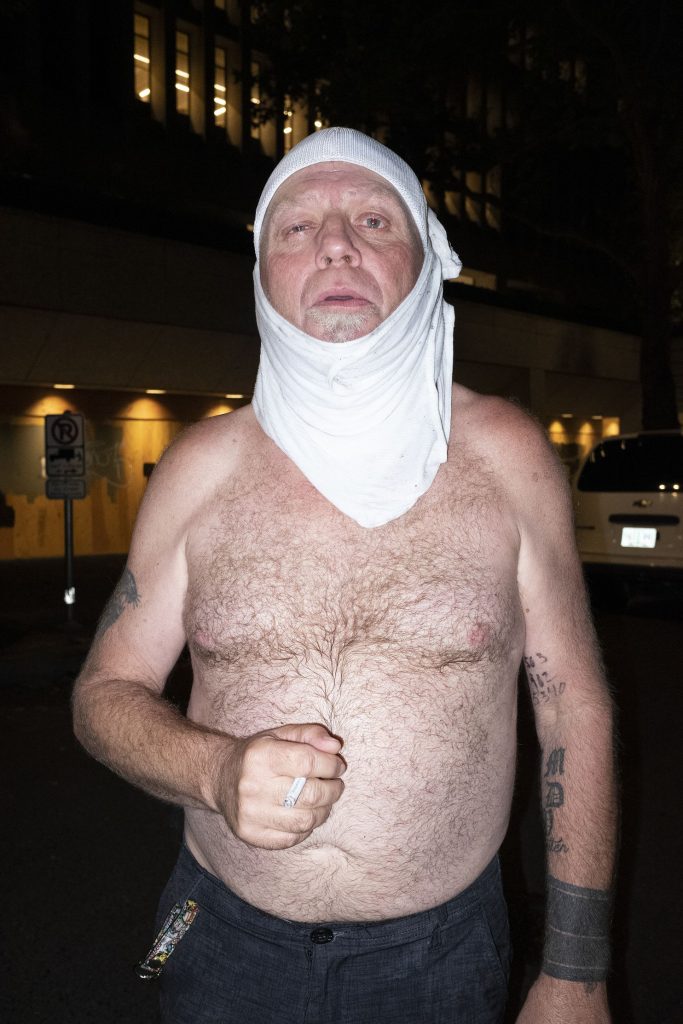 This man was tear gassed by federal police on July 16. Photo by Rian Dundon 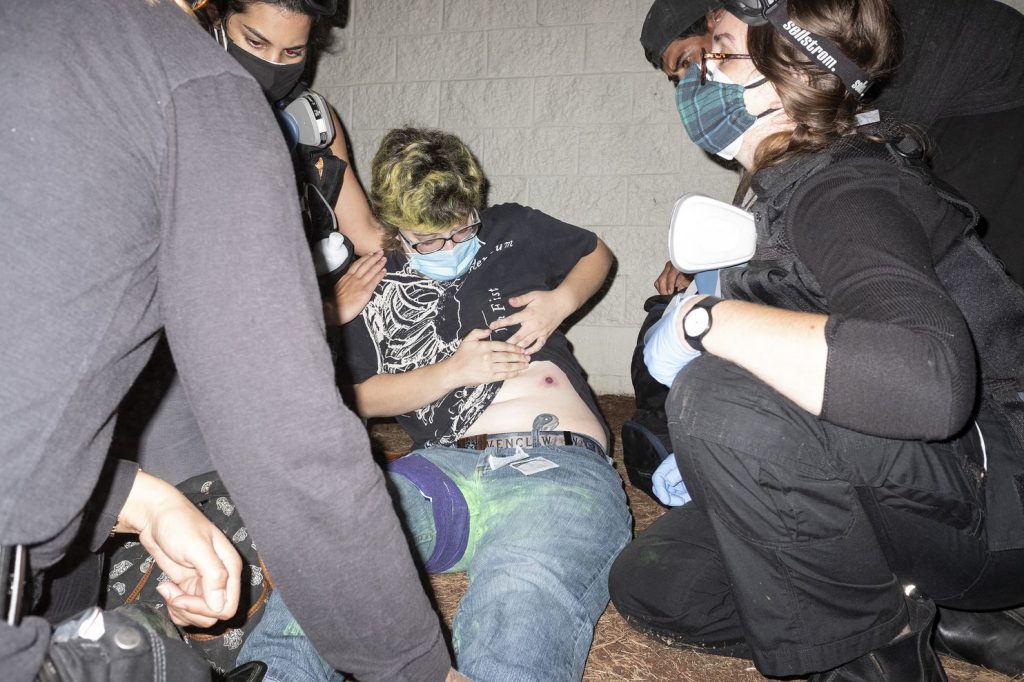 People tend to a protester shot by a rubber bullet during demonstrations outside the Portland Police Association on Sept. 4. Photo by Rian Dundon

Rian Dundon is a documentary photographer from Portland, Ore. His zine series, Protest City, is published by Nighted. You can see more of Dundon’s work on his website, here.