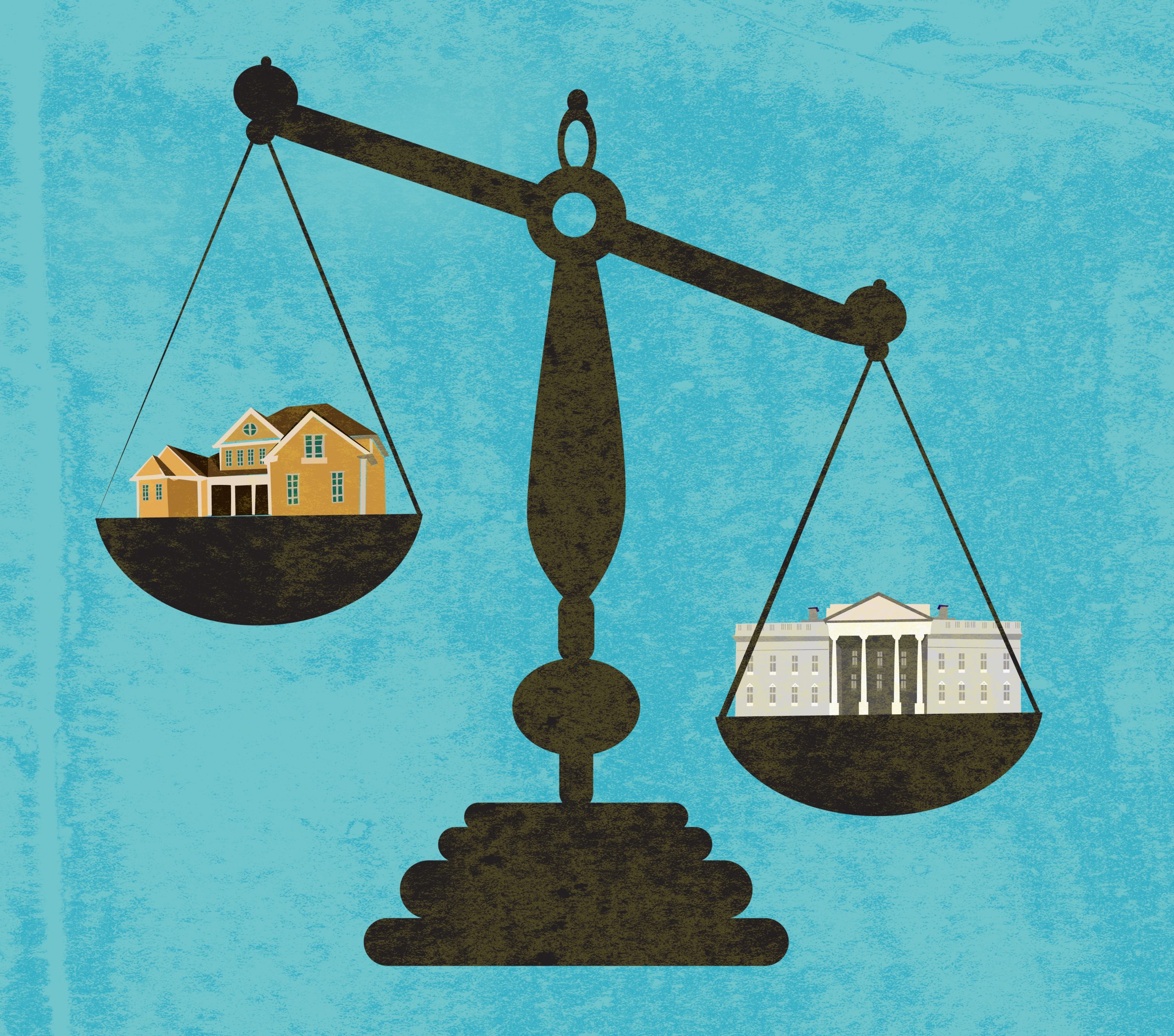 Illustration by Fanatic Studio via Getty Images
Housing, The Pandemic

Nichole Anderson, an Ogden librarian, was navigating a divorce and raising two small children in the summer of 2019.

When she left her husband and moved out, she didn’t realize the separation wasn’t as clear cut with their landlord. Despite notifying the apartment management, her name stayed on the lease. When her ex stopped paying rent, her name was added to the eviction complaint.

On the hook for a $2,488 judgment because of her ex-husband’s negligence, she struggled with payments into the spring of 2020. Little did she know that the landlord’s law firm, The Law Offices of Kirk Cullimore, Utah’s leader in eviction, filed a motion to “amend the judgment” against her, alleging she owed $5,367. The firm argued it had discovered, almost a year later, extra damages not included in the first eviction filing.

She learned about a court hearing (where she could have fought the motion) only after it happened because that’s when the Cullimore firm sent her an email about it. The email also answered her question of why she hadn’t known of the court hearing beforehand: The firm had mailed the notice to an address she hadn’t lived at for years.

“It was a super old address from when I was 17,” Anderson said.

Dave Todd, an attorney with the Cullimore firm, said notices were mailed to her last known address as required by law and emailed as well, even though that is not required by law. Anderson disputes the claim about the notice being emailed.

She wants to get away from renting and is hoping to purchase a home with her new fiancé, but she also expects to have to file for bankruptcy because of eviction-related debt.

“[I’m] still trying to get into my own place, but the bankruptcy isn’t going to help,” Anderson said.

Her surprise about being responsible for cleaning and other fees her landlord “discovered” nearly a year later is not that unusual for renters evicted by the Law Offices of Kirk Cullimore. The Utah Investigative Journalism Project reviewed more than 1,000 eviction cases, among them 390 cases in which the Cullimore firm later sought to add damages to old evictions. Their attempts to squeeze more money out of evicted renters in the form of damages started in 2019 and have ramped up, and in one case the firm reached back over three years to tack on added charges.

Firm founder and senior partner Kirk A. Cullimore is a past president of the Utah Apartment Association (UAA) that lobbies on behalf of landlords and property owners at the Legislature. His son, Kirk Cullimore Jr., is also an attorney at the firm and acts as the association’s “government affairs chair,” in addition to his role as a state senator.

The UAA was active in helping to craft HB462 that was passed in the 2020 legislative session. It prohibits landlords from seeking added damages more than 180 days after eviction. At the same time, the legislation also relieved landlords of having to track down evicted defendants to serve them notice about court hearings after the initial eviction notice, putting the burden on defendants to notify the court and opposing counsel of address changes.

Despite the new law, the firm has also continued filing motions to add judgments more than 180 days after eviction.

Between May 12, 2020, when the law went into effect, and Dec. 14, 2020, the firm filed and won 54 motions to add damages, even when the motion violated the 180-day deadline imposed in HB462. The average time between the eviction filing and the new motion was one year, and those motions tacked on $238,751 in combined new damages for the firm to collect.

The younger Cullimore, a Republican senator from Cottonwood Heights, said it was his understanding that HB462 did not prohibit new damages 180 days after eviction.

“That was my understanding,” Cullimore said.

That’s not what the text of the law says, however. Nor was it what bill sponsor Rep. Jim Dunnigan, R-Taylorsville, told a legislative committee last March.

“The landlord can go back later and say it required more money to fix up the place, ‘once we got inside it, it took more,’ [and] they can request an additional judgment,” Dunnigan told the committee in pitching the bill. “Right now the time period as I understand it is unlimited, this [bill] limits it to 180 days.” According to Dunnigan, the bill was crafted in close collaboration with the Cullimore-linked apartment association.

It was introduced late in the session but shot through at breakneck speed, receiving just one public hearing that lasted 15 minutes in the committee chaired by Dunnigan. He also substituted the bill at that time with a version eliminating language requiring a landlord to show “good cause” for a court to allow time beyond the 180 days for additional damages to be filed.

In a recent interview, Dunnigan described the 180-day deadline for additional damages as a concession to renters. When told these motions were still being filed after 180 days from eviction, Dunnigan said that was concerning.

“It may take a little time for people to understand that the rules have changed, but I would expect the courts would know,” Dunnigan said.

The courts were briefed on the law. Nevertheless, judges approved the Cullimore firm’s 54 filings without requiring any special hearing or motion to be filed by the firm.

Cullimore defends the practice of filing for damages after the allotted period, saying landlords sometimes are slow in notifying the firm about newly discovered damages.

“They might sit on it a while,” Cullimore Jr. said.

He also said there are costs and time involved in tracking people down, and that his firm can sometimes do that more effectively and cheaply months after an eviction.

“Sometimes it doesn’t make sense to do that until we can verify where they are,” he said.

In reality, the cost of tracing someone’s address in many cases can be small. A typical search through a popular tracing service such as Skipsmasher only costs $1 and takes minutes.

George Sutton is a banking attorney for Jones Waldo who does pro bono eviction defense work. He considers many belated motions for added damages to be “extortion.” They benefit landlords’ attorneys because eviction debts come with accruing interest. Most leases for complexes represented by Cullimore include 24% annual interest rates on eviction debts.

“These affect people who are living paycheck to paycheck and all of the sudden this lawsuit comes out of nowhere,” Sutton said. “That’s a real surprise.”

Sutton points out the law gives landlords the benefit of the doubt in claiming damages. Apartment managers can submit general cost estimates instead of receipts and itemized documentation for cleaning and repairs.

Cullimore pushes back against that claim.

“We usually don’t press forward with anything if we don’t have documentation for it,” Cullimore said.

Cullimore said that if an evidentiary hearing is requested by opposing counsel or a judge then landlords have to provide receipts.

Does that happen often?

“I wouldn’t say often,” Cullimore said, and then after a pause. “I would say it happens often enough … it is something we regularly do.”

Not according to the data. Of the more than 200 cases in which amended judgments were approved in 2020 for the Cullimore firm, evidentiary hearings were requested in just three.

“A first-year law student could easily go in and defend one of those cases,” Sutton said, “But without that [legal] backup you could just be jerked around and never see it coming.”

The spike for some was drastic. One individual owed $274 from a February 2019 eviction, and received an initial judgment two weeks later for $3,803. Roughly 16 months later, the Cullimore firm filed a new motion and got a new judgment of $9,290.

The Utah Investigative Journalism Project reviewed thousands of pages of documents from 837 eviction filings, and 102 of these displaced Utahns were contacted and interviewed about their experience. More than one-third of those interviewed said they didn’t receive notice about court dates where they would have the opportunity to argue their cases before a judge.

Tolina Tausinga was not only unaware that an added judgment had been filed against her, she did not even realize she had an eviction on her record. The apartment, she recalled, was a dump, maintenance never came by and when management said it wasn’t renewing the lease she felt it was just as well.

She said she was late on the rent, so she dropped off a check in person at the Cullimore law office. She thought that was the end of it.

Her reaction when told by a reporter she had not only been evicted but had two judgments against her: “Oh hell no.”

“How can someone show up for court if they didn’t know they had court?” she asks.

Todd, the attorney with Cullimore, said notices were sent to her last known address — in this case the apartment where the firm knew she was no longer living.

Flexibility during a pandemic

Tara Rollins, executive director of the Utah Housing Coalition, understands landlords’ investment and applauds small landlords who work with renters to turn a profit and provide housing. But she also worries that too many large housing units see ballooning fees as too lucrative to pass up — no matter the human cost.

“As far as I can see, housing is no longer about shelter — it’s a portfolio and portfolios have to perform,” Rollins said. “The way they’re going about performing is through all these additional fees that they’re adding to the judgment.”

As she sees it, more transparency on fees and greater understanding during a global health crisis are not too much to ask.

“My whole thing is I want people — renters and landlords — to be made whole,” Rollins said. “There’s no reason that during a pandemic we can’t be more flexible.”