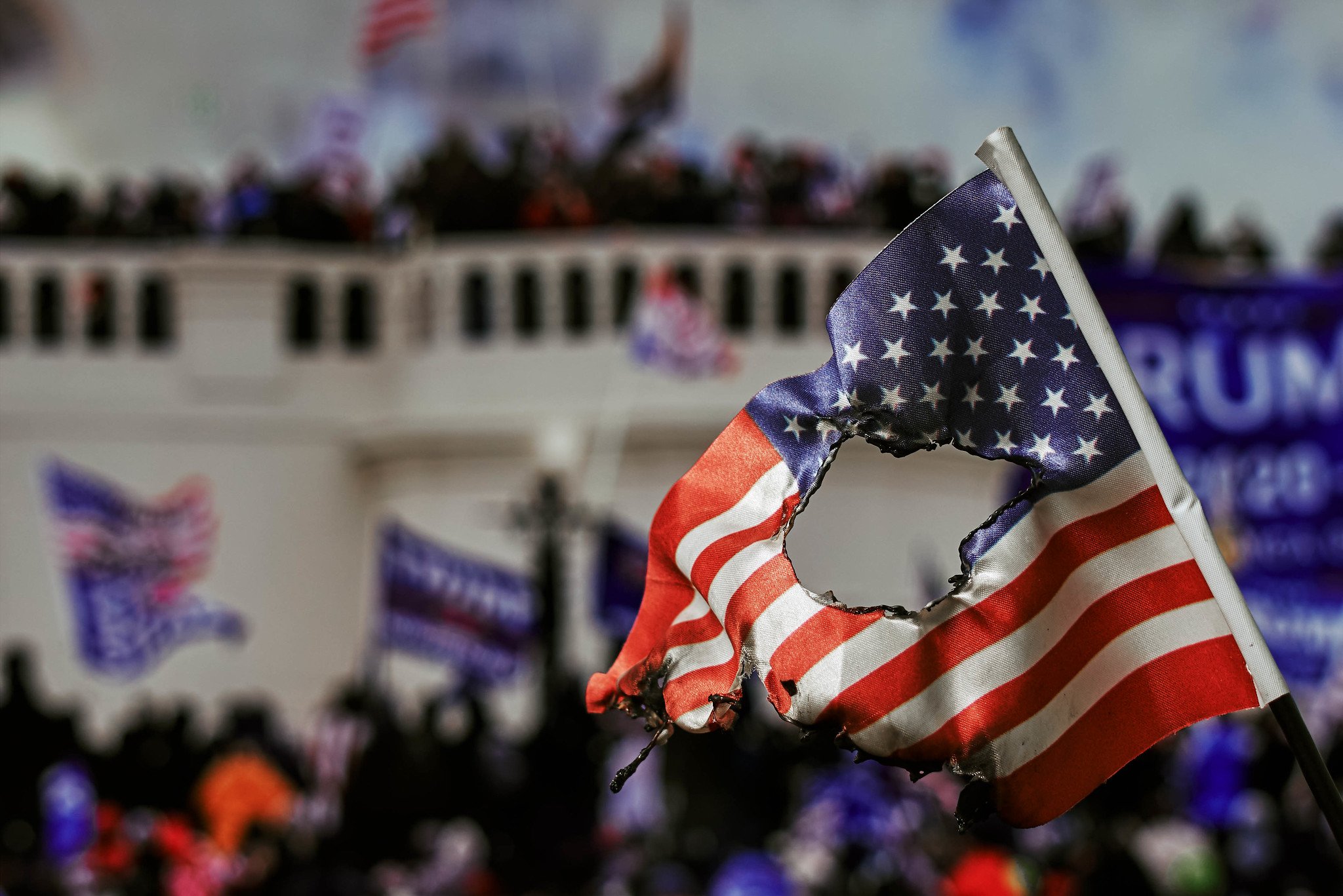 Before the Capitol Attack, There Were the Abortion Wars

Some thirty years ago a man named John Brockhoeft planned two bombings at abortion clinics and women’s health centers in Ohio and Florida. Brockhoeft was sentenced to seven years in prison (he served five) for the firebombing of one clinic; he had already served 26 months for scheming unsuccessfully to bomb another. Brockhoeft called himself a “freedom fighter,” and kept a prison newsletter detailing his missions. It was an era when headlines were filled with the number of abortion providers were either targeted or assassinated.

Three decades after his last clinic bombing, the same Brockhoeft live-streamed his arrival at the Capitol Building, on January 6. He called the moment his fight “for our beloved President Donald J. Trump.”

Brockhoeft is, at once, a long-time anti-abortion extremist and a Trump-loving rioter. He’s not alone.

Few of the anti-abortion activists that were Trump rioters are quite as extreme as Brockhoeft. But there were plenty of still-quite-zealous activists inside the Capitol mob on January 6. This spectrum of pro-life extremists included Derrick Evans, the now-former West Virginia legislator, whose presence in Washington that day led to his arrest and forced resignation. Evans was previously known for his hobby as a harasser of women at a local abortion clinic, where he wore his MAGA hat for the occasion. Also there that day was Abby Johnson, known for her purported conversion from Planned Parenthood worker to anti-abortion and anti-birth control extremism. Also, there was Jason Storms, who worked for the anti-abortion group Operation Save America and called Jan. 6 “Revolution 2.0.”

The link between long-time anti-abortion extremists and today’s Trump rioters and white nationalists hasn’t been sufficiently scrutinized. But there is a “strong tie between anti-abortion terrorism and Christian white nationalism,” said Mary Alice Carter, senior advisor for the reproductive rights research group Equity Forward. Abortion is unacceptable to white nationalists, Carter said, “because of the white supremacist idea of having as many white Christian babies as possible, both to fight the declining birth rate and to hold off the rising immigrant population.”

Perhaps the connection between the two populations and their methods is not being made often because crimes against women and their health—and the people of both genders who care for them, like doctors—are rarely equated with other kinds of terrorism.

Yet at least 12 other anti-abortion activists all along the extremist continuum showed up at the Capitol that day, according to the reproductive-rights group Abortion Access Front (AAF).

“The reason people don’t people take the anti-abortion terrorists seriously is due to what I call abortion exceptionalism,” Carter said. This exceptionalism is based on the thinking that pro-life extremism is different from other radical movements, that it’s a single-issue form of activism and mostly religiously motivated. This is not always the case.

I’ve reported at clinics in Mississippi, Indiana and New York and talked to the anti-abortion protestors who throng in front. These crowds tend to be uniformly white, older. The majority of those within them are male. These activists had no problem regularly hassling or yelling at the much younger women entering or leaving by the clinics’ doors.

Groups like these, as well as more formal older groups such as Operation Rescue in the 1980s and ‘90s, have a playbook. In addition to persistent harassment, in 1991, say, more than 2,000 antiabortion activists were arrested in Wichita, Kansas, where they sought to shut down the city’s three abortion clinics. There were also years of terrorism against abortion providers where the extremists were both anti-abortion and general-interest Christian supremacists. That included Eric Rudolph, a serial clinic bomber best known for his attack on the 1996 Atlanta Olympics, who wrote in his 11-page confession, “Because I believe that abortion is murder, I also believe that force is justified and in an attempt to stop it.” His bombing spree—which included bombing a lesbian bar—was in his mind, part of a single struggle against a “monstrosity of a government” that permitted abortion.

The clinic invasions of the past parallel tactics at the Capitol earlier this month, David Cohen, a law professor at Drexel University who specializes in abortion rights, told me. Just like the rioters on January 6, participants of both movements have aggressively invaded buildings, with the object of terrifying those inside and shutting down all activity. Until it was limited by Freedom of Access to Clinic Entrances Act in 1994 and other measures like it, clinic harassment was the method of the most vocal anti-abortion groups.

Both QAnon, the conspiracy subculture that a number of the Trump rioters were a part of, and antiabortion radicals share another similarity in their worldview, reproductive rights historian Karissa Haugeberg of Tulane University told me: Manichean simplicity. “Good women have children, bad women don’t; good people want to protect children from pedophiles, so they support Trump and bad people do not,” said Haugeberg. It is a kind of thinking, she said, that can “justify committing heinous acts.

These groups also rely their own sets of so-called “alternative” facts. Anti-abortion activists I’ve interviewed, for instance, like to claim that there is a correlation between having an abortion and a woman getting breast cancer (there is not). Similarly, the Trump rioters had their own set of untrue beliefs, including the overarching insistence that more votes had been cast for the former president than for Joe Biden.

And both employ a dodge-and-weave approach to promoting violence. Operation Rescue and other anti-abortion activist groups often ranted about doctors who performed abortions, singling them out by name, only to profess dismay when those same doctors were targeted by threats or assassination. The organizers of Trump’s Jan. 6 rally and the speakers there similarly told the crowd that the election was being stolen from them, that they were the equivalent of Revolutionary War patriots, and that the moment of crisis had arrived—and then, feigning surprise, denounced the attack on the Capitol after the mob took them at their word.

The entwining of these groups has been on full display over the past year. The January action wasn’t Broekhoeft’s first Trump era rally; he also showed up at the Ohio statehouse, protesting COVID protection measures in April. He posted to his Facebook page that week: “I was happy to stand with fellow Ohioans yesterday in a rowdy protest against the house arrest that the government has been using ‘Covid-19’ as an excuse.” Abby Johnson posted to Facebook, proudly on the 6th, “Got a little bit of pepper spray in my lungs.” Activists had arrived from the groups Operation Save America as well as March for Life and Apologia Studios, the production arm for the anti-abortion right-wing media.

While this mishmash of pro-lifers that rioted for Trump might feel new, in truth, anti-abortion extremists and white right-wing activists have shared common cause for decades. They are united by a sense of grievance and the readiness to pursue escalating violence. Reproductive justice supporters have long known what happens if these kinds of threats aren’t taken seriously. The Capitol attack confirmed it.

Alissa Quart is the executive director of the Economic Hardship Reporting Project. She is also the author of four nonfiction books, including Squeezed and Branded, and two poetry books, most recently Thoughts and Prayers. She has executive produced and written films about clinics and anti-abortion activists, including the Emmy-winning film Jackson.