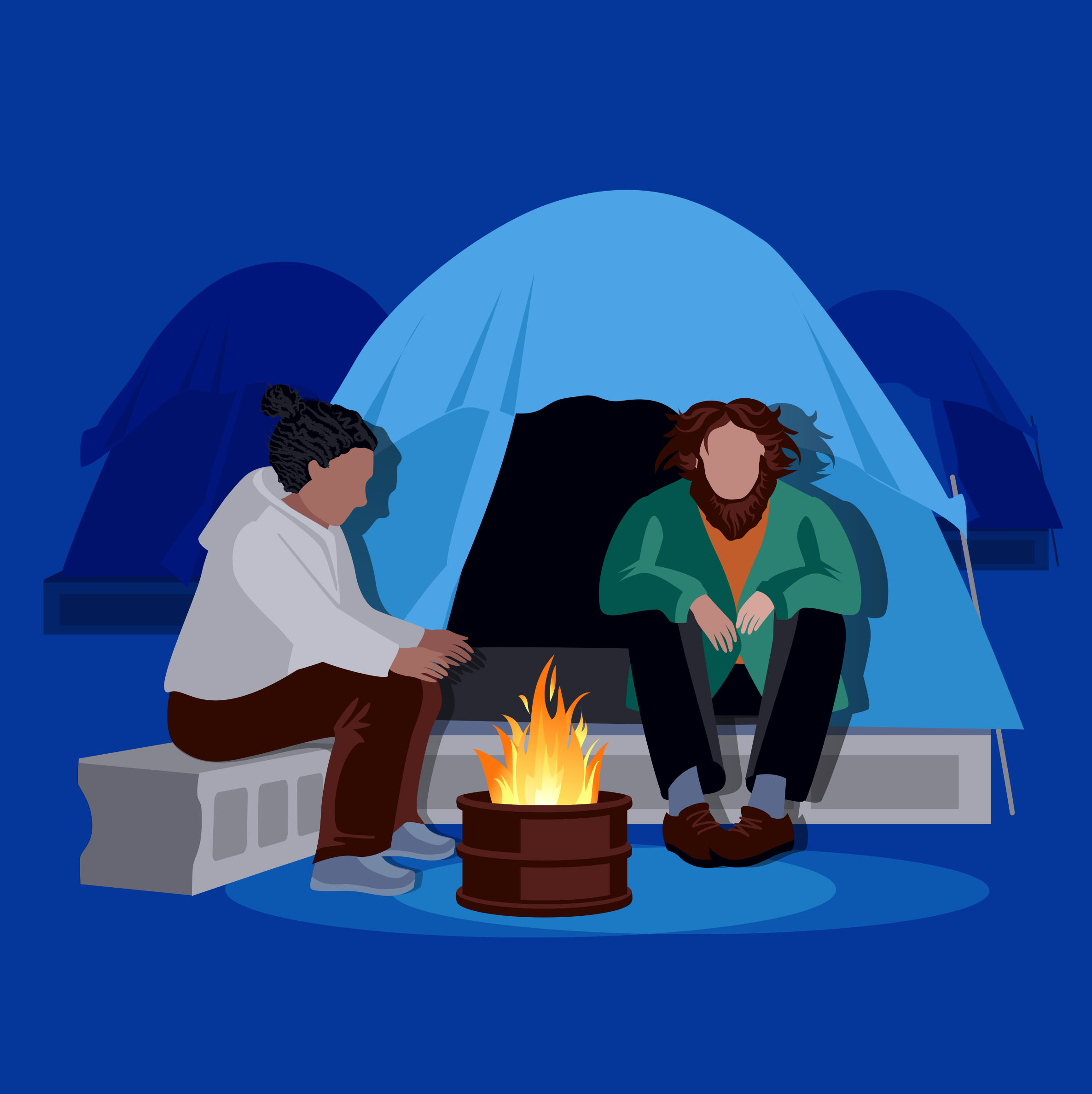 Illustration by Macrovector via Getty Images
Housing, The Pandemic

This is part two of Lori Teresa Yearwood’s ongoing series, How Did You Sleep Last Night?

On the first Sunday in February, Darin Mann knew sleep would not come easily. It had been hours since Mann had watched police and paramedics take away the body of a woman who had been living in a tent in his front yard. Now he stood on his front porch in the winter darkness.

“I am really sad and exhausted—wasted, really,” he said. “I’m also freaked out.”

In mid-January, Mann, a community activist in Salt Lake City, had started inviting homeless people to live in his ⅓ acre yard, in a modest suburban neighborhood with views of the Wasatch mountains.

Throughout that Sunday, neighbors jammed Mann’s phone with texts. Some lauded Mann, 31, for his humane treatment of people who so many others don’t want to think about, let alone see, in their neighborhood.

Other texts weren’t so supportive. Mann, founder of a nonprofit called the Village Cooperative, was “creating undue stress” for neighbors who were “angry and fearful that you have invited people in your front yard,” read one message.

The encampment, called the Village Camp, had held anywhere between five and 15 people at a time. Mann said he enforced rules against drug use and violence and made sure that residents had access to medicine, food, and donations—even to the bathroom in his home.

It was meant to be a safe place where the unhoused didn’t have to stress about their belongings being stolen, or live in constant worry of being told to move elsewhere.

Until that February day, Mann said, everyone had walked around with smiles on their faces, enjoying a sense of calm, sharing pancake breakfasts and evening meals on an outside barbecue that Mann placed in the middle of the yard. That, Mann said, was a time when he enjoyed some of the best sleep of his life.

“I slept great,” Mann said. “Everyone watched over the place, and I felt safe and protected.”

Then, on Saturday Feb. 6, the woman and her boyfriend went to sleep inside their tent. The 45-year-old woman never woke up.

The tent in which the woman died still stood in Mann’s yard. It was covered in layers of bright blue tarp to keep the cold air out—a desperate measure that may have helped lead to her death, as the coverings apparently also helped to trap the poisonous gases from the wood that she and her boyfriend burned to stay warm.

“I was near the tent just a while ago and could still smell it,” one of the men staying in another tent in the yard said. He said he and others in the camp had used the same wood, a handout that they had been given at another space where the unhoused gather.

At about 6 a.m. on Feb. 7, the woman’s boyfriend staggered out of the blue tent, gasping for air, Mann said. Then he was taken to a hospital for what looked like carbon monoxide poisoning, which Mann said police told him also appeared to be the cause of the death of the woman. Police would neither confirm nor deny that information.

Her family asked Mann not to share her name publicly, Mann said. But he did say that he had known her for about two months, that she had broken out of a drug addiction, and that she was someone he considered a good friend. She, along with a handful of the other unhoused people had helped him prep his garden for spring planting and build the chain-link fence around his home.

“She was just really motivated in trying to better her situation,” Mann said. “She was trying to set a positive example for homelessness and get her stuff back in order.”

A few nights before, one of the Village residents had pounded on Mann’s door in the middle of the night, alerting Mann to an attempted robbery occurring at a neighbor’s house. But now, people were tossing the word liability around, Mann said, and he felt a lot of unease, like the target of “a witch hunt.”

It seemed to him, he said, that people were going to use the woman’s death as “justification to shut down a camp that wouldn’t be here if we didn’t have a huge crisis on our hands in our city,” Mann said.

In January 2019, the latest year for which statistics are available, approximately 2,800 people were experiencing homelessness on any given day in Utah, according to the U.S. Department of Housing and Urban Development. But that was before the COVID-19 pandemic, in which millions of Americans, many of whom were low-income, lost their jobs.

Now, Mann says he sees many more unhoused people on the sidewalks and in homeless encampments. Nationally, current predictions for housing instability are dire—and the country is facing an unprecedented homelessness crisis. According to U.S. census data, 30 million to 40 million people could be at risk of eviction in the next few months.

Mann grew up in Salt Lake City, with a father who “tried to be really strict and teach me the importance of responsibility and to always be honorable,” he said. The head of a fire sprinkler company, his dad cared a lot about his employees. Once, he came home and told his family how he had bought false teeth for one of his employees who couldn’t afford them. Then his father cried that he couldn’t do more to help the person, Mann said.

As for his mother, she “poured a lot of love on me,” he said. Nevertheless, Mann was “no summer peach as a kid,” he said. He never indulged in drugs, he said, but he was a rebel who wanted to hang out in the forest instead of sit in a classroom. After high school, Mann majored in English literature with an emphasis in political theory at the University of Utah. His first and last job in corporate America was as a telemarketer for a chain of gyms. He hated it, he said, and read books at the same time he was working the phones. Eventually, he was fired for telling a city official that the company was engaging in some “shady” financial practices.

After that, he started working in the nonprofit world, which he loved. In 2018, he founded the Village Collective and bought his home with the help of his dad, who co-signed on the house. Three housemates help him pay the mortgage. One of them was homeless last year and lived in Mann’s garage for a while.

“He would clean the garage for me and help clean the house and now he is just a very dear friend of mine,” Mann said. “He lives here now and pays rent and works. He does Instacart and Uber and stuff like that.”

Mann paused when I asked him if he is religious.

He grew up in an agnostic family, he said. But at 20, he found a sense of purpose in the Church of Jesus Christ of Latter-day Saints. Though he’s stopped attending services—“a lot of us go to church on Sunday and can’t believe there is a homeless camp in our neighborhood on a Monday,” he said —he blesses a sacrament and conducts a personal worship in his home every Sunday.

“I just want to be an embodiment of what I believe,” Mann said.

On Feb. 7, after watching police carry the body away, Mann knelt on the hardwood floor in his bedroom to conduct his private worship. He blessed his water and small piece of bread, asking God to bless and sanctify them.

Later that night, Mann focused on releasing his stress and grief. First he drank a beer, he said. Then he danced wildly around his living room to electronic music with a heavy beat to “get the energy out of my body.”

“I did some screaming exercises—just screaming as loud as I could to release frustration, sadness, and anger with, like, no inhibitions,” Mann said.

Then he fell into the arms of a close friend who held him, he said.

The next morning, he said he was still trying to digest all that had happened. Perhaps, he conceded, his desire to save the world was naïve.

“But you don’t get anything done without being optimistic and naïve,” he said. “I want to create a better world where all live and thrive—2021 is the time when we need to start infecting the world with as much light as possible.”

Yes, he said, “it’s unsafe to live in a tent—and we need to do something about it.”

Mann shut down the Village Camp on Feb. 10. Everyone was given more permanent housing in local hotel rooms, paid for by the city, Mann said.

Except for those late-night hours when he stands in front of the whiteboard in his living room, brainstorming about how to start a tiny-house community for the unhoused, what the project will look like, and how to secure its funding.

Sleep doesn’t come until around 1 a.m., he said.

“It’s restlessness” Mann said. “I’m hoping that I can channel the energy from this tragedy into a positive thing.”

Lori Teresa Yearwood is the Homelessness and Housing reporter for the Economic Hardship Reporting Project. Her work has also been recently featured in the Washington Post, the Guardian, the San Francisco Chronicle, the American Prospect, and many other publications.