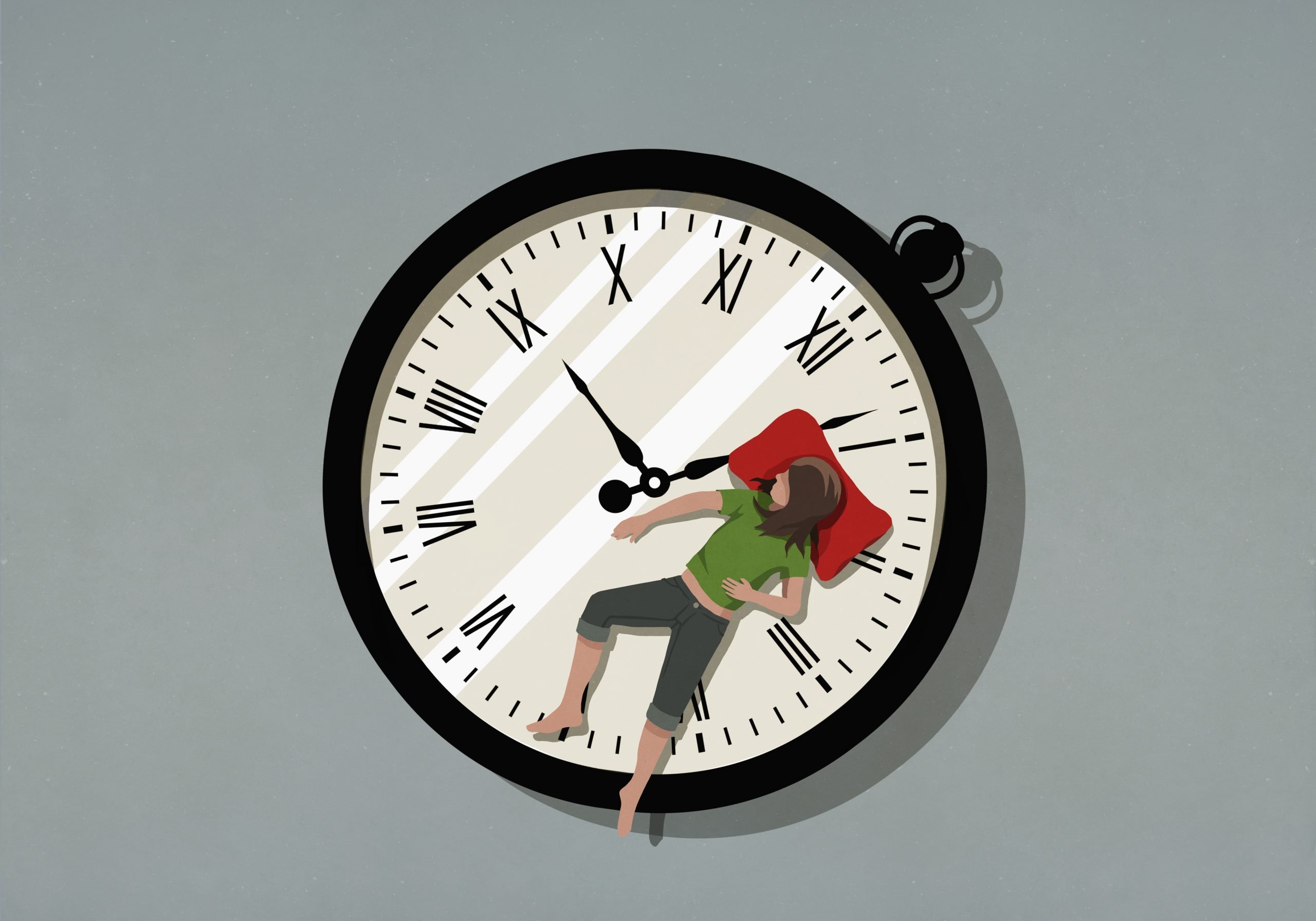 Illustration by Malte Mueller via Getty Images
Housing, The Pandemic

Asking People One at a Time: How Did You Sleep Last Night?

This is part one of Lori Teresa Yearwood’s ongoing series, How Did You Sleep Last Night?

Logically, Priscilla Purvis, a full-time secretary at a Boston hospital, knows that obsessing over her family’s budget until 2 a.m. every night is not going to fix the fact that she’s behind on her rent. But for months on end, every night since she first began to miss 10-day chunks of work because of COVID-like symptoms, her nightly routine includes wiping down her apartment’s doorknobs and kitchen countertops with disinfectant, attempting to calm her mind with an Audible book, and slumping into bed with her laptop, where she tries once again to make her nearly nonexistent checking account cover her family’s basic expenses.

The 41-year-old checks and rechecks her bank account, as if “magically money is going to appear,” she said wryly.

Next come her exhaustive Google searches for COVID-19 funding for low-income wage earners. Those can happen before, after, or in the middle of the budget wrangling. One of her recent, bleary-eyed decisions that came after applying for local emergency funding: She would feed her family breakfast for the rest of the week from a pack of six bagels, allowing her to take the last $25 allotted from her food budget and spend it on washing her family’s clothes at the local laundromat.

During that mental machination, Purvis did what she always does: She held onto the only real goal she says will bring her a decent night’s sleep.

“All I need is to take the rent money to my landlord. It’s all about that roof,” she said. “Forget the light bill or the internet bill. Forget the sleeping pills and doctors’ instructions on how to sleep. I need my rent money.”

Sleep doesn’t generally come until 3 or 4 a.m. She often awakens still bent over her laptop. Her wife is either sleeping next to her or is in their son’s bed.

Before Purvis shared the personal details of how her financial footing became so pre-pandemic thin, she spoke to the stigmas that she often finds herself facing as a low-income Black woman.

“This is not because I was being irresponsible,” she said about the status of her bank account, which held at a total of $247.09, eight days before her February rent was due. “It’s not because I was buying things that were inappropriate. That’s the conclusion people jump to.”

In an impromptu tour via Facebook Messenger around her apartment, Purvis revealed walls decorated with portraits of her late mother and sister, and responded to a compliment about the chocolate-brown leather couch in her apartment with: “That was a hand-me-down from a friend. We are not spending money on expensive furniture or on big flat-screen TVs here. We are trying to pay the rent.”

She once had a savings account “with at least a few hundred dollars floating around,” Purvis said. But in August, Purvis said, she fell ill with COVID-19-like symptoms and took 10 days off from work. In September, she came down with the same symptoms and took another 10 days off. Then in December, her 4-year-old son tested positive for the virus, and Purvis stayed home with him for another 10 days.

Purvis isn’t a salaried employee with an automatic allotment of sick day benefits. Her first round of illness wiped out all her previously accrued sick days, she said. So the other paychecks she received during those times away from work were slashed accordingly. 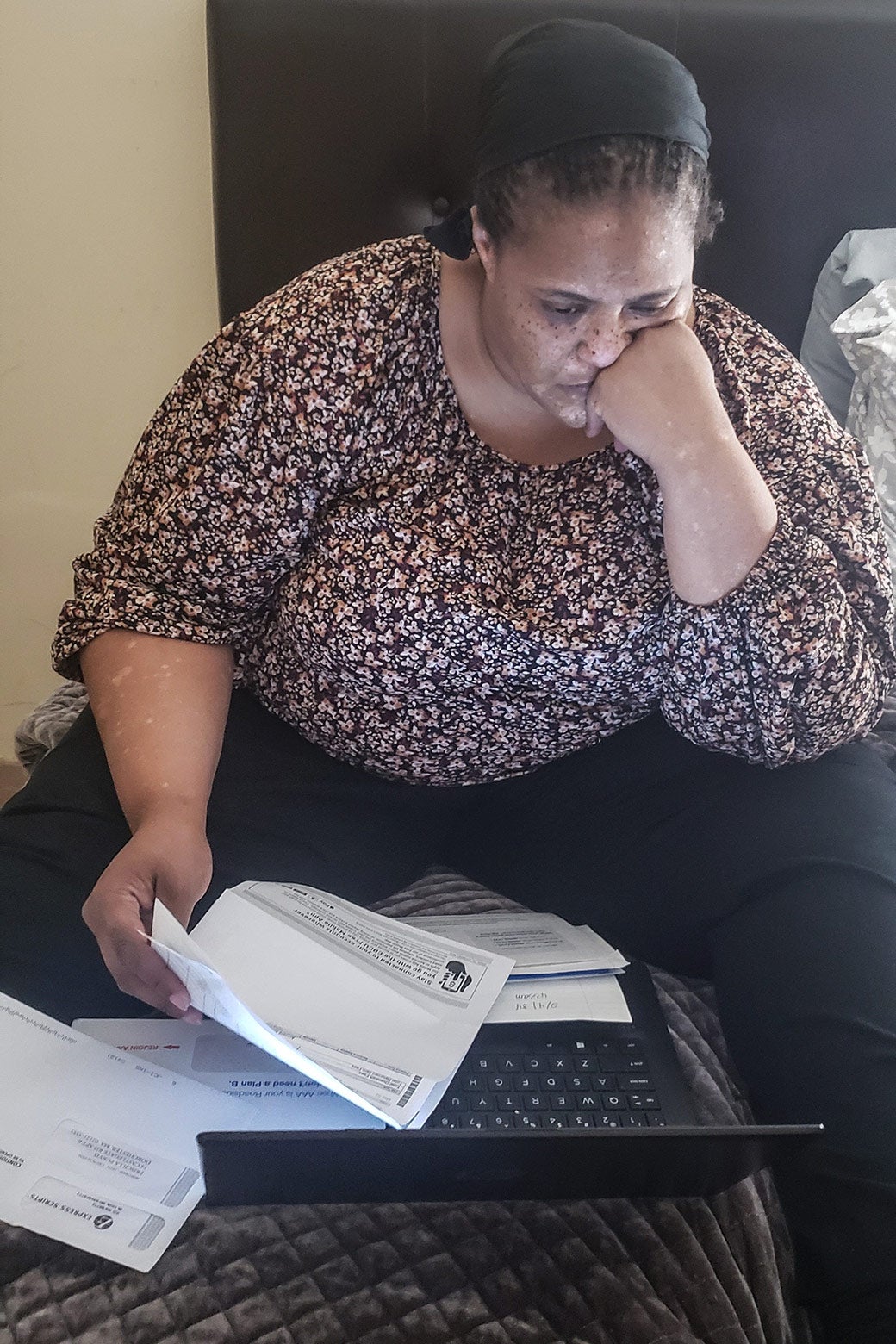 Millions have joined her in a sudden and deep dive into financial insecurity as well as sleeplessness. At the end of last year, an estimated 30 million to 40 million Americans faced the possibility of imminent eviction because of circumstances stemming from COVID-19, according to a report from the Aspen Institute. Not surprisingly, an October Marketplace–Edison Research poll reflects the emotional ramifications of that kind of economic terror: Thirty-five percent of Americans surveyed were losing sleep over their financial situations, specifically pandemic-related issues that included income loss, layoffs, and missed rent or mortgage payments.

At the end of January, Purvis was a month and a half late with the $1,741 a month rent on her two-bedroom, subsidized apartment.

Earning approximately $42,000 a year, she qualifies as “low income”—a population experiencing disproportionate economic stress during the pandemic, according to a recent Pew Research Center survey that found that 1 in 4 Americans in general have had trouble paying their bills since the COVID-19 outbreak started in March.

Adding even more pressure to Purvis’ situation is the indelible memory of the three years she spent living in homeless shelters, and sometimes even on the streets, when she was in high school.

“Being homeless is very degrading,” she said. “I remember the nights when I couldn’t get into a shelter and I didn’t have a place to go and I had to put my face on the concrete. That is a feeling you’ll never forget once you have done it. And it’s a position I never want to choose to be in again. That keeps me up at night.”

Even in that poverty, she saved money; for six months she went to school while working a full-time job as a production assistant at an educational television network, she says, saving 60 percent of her income, a condition of staying at Rosie’s Place, one of the shelters where she lived back then. When Purvis graduated from Muriel S. Snowden International High School, she had saved enough money to pay the first month’s rent and security deposit on an apartment of her own, and she began to fill it with furniture with more money she had saved during her homelessness.

That experience taught her about the importance of community, she said. She became homeless after “leaving a bad home situation,” she said, and found herself unsupported—save for a group of older, long-term homeless women, who watched out for Purvis by sewing and ironing her clothes so she could be prepared to go to school every morning. They even made sure Purvis had presents for Christmas, Purvis remembers.

Yet Purvis’ clarity about her past, and her desire not to repeat it, fills her nights with rumination over the reasons she doesn’t want to ask the people in her current support network for help.

“Everybody is basically in the same boat—after all this COVID, they’re tapped out, too,” she said.

Purvis’ wife, a recently retired social worker, contributes to the household income with her Social Security benefits. But after taking care of their child—whom they adopted when Purvis’ sister died suddenly in 2016 of an asthma attack—the couple’s combined income barely covers the necessities. And a recent spate of emergencies in Purvis’ immediate family has wiped them out.

Two years after her sister’s death, Purvis’ mother was diagnosed with a terminal disease and died months later. Purvis says she emptied her 401(k) to pay her sister’s and mother’s funeral expenses.

“I come from generational poverty, so for me, finances are top priority,” Purvis said. “I’m a person who usually has money under the cookie jar and under the cabinet. But having to clean myself out two years in a row left me destitute.”

These days, at the end of some of her workdays, Purvis runs into emotional obstacles that make her stop and cry. “As soon as I get a quiet moment, I go into my bedroom and shut the door to pull myself together before my son sees me,” Purvis said.

When I asked her where she finds her resilience, she said that when she opened her eyes the other morning, she saw her wife singing “Lovely Day” while urging their son out of bed. Purvis lay there, watching her wife help the 4-year-old wash his face. By the end of the ritual, the little boy was singing and dancing.

“It really touched me,” Purvis said.

In early February, I called Purvis to see what happened with her rent situation. She said that a Boston agency had told her to fill out an application for rental assistance and that Purvis would hear from them soon.

Said Purvis, “I will definitely get some sleep once that rent is totally paid, you know what I mean?”

Lori Teresa Yearwood is a trauma-informed, freelance journalist who works as a Homelessness and Housing Reporter for the Economic Hardship Reporting Project. Her articles have appeared in the Washington Post, CNBC, the San Francisco Chronicle, and the American Prospect, among others.