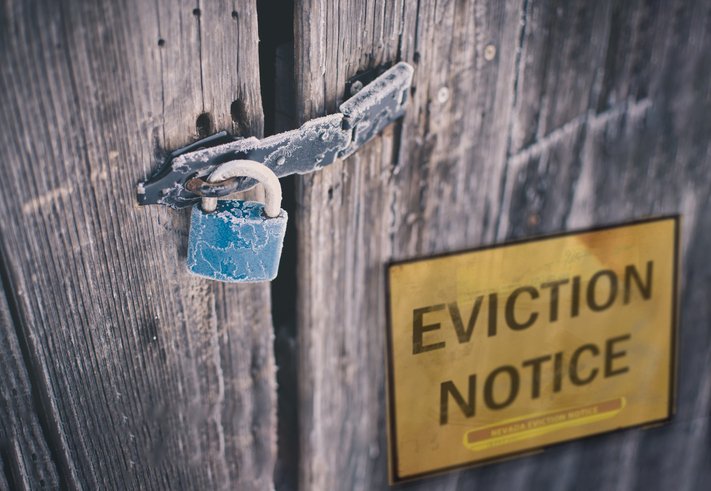 Photo by No-Mad via Getty Images
Housing, The Pandemic

A few months ago housing advocates, professors and attorneys came together as a working group formed by the Utah courts to brainstorm ways to halt, or at least curb, evictions.

One idea that emerged was to translate certain key pieces of eviction law information into Spanish, Vietnamese and Arabic to help communities of color hit hard by evictions, with advocates offering to pay for certified translations.

One of the landlord attorneys bounced the idea off Paul Smith, head of The Utah Apartment Association.

He was not receptive.

“We are an English only state,” Smith wrote in an email obtained by The Utah Investigative Journalism Project. “It’s hard enough to interpret meaning in one language, let alone additional languages that wouldn’t be binding in the courts.”

In another section of the email the attorney asked Smith what he thought about research presented to the working group from the Utah Commission on Criminal and Juvenile Justice that showed evictions had a disproportionate impact on minority and low-income households.

“It’s a great talking point for them but irrelevant in that we can’t evict people unless they violate contracts and we can’t control which of our tenants do,” Smith responded.

In a recent interview, Smith stressed that landlords are in the business of housing, not evictions. When asked why not make simple translations available for people of color to help avoid evictions going to court, Smith said doing so would put landlords at risk of being accused of discrimination.

“We’re supposed to be color blind,” Smith says. “We don’t want to evict anyone but anyone who doesn’t pay rent, we treat the same.”

Smith’s organization lobbies for landlords at the state Legislature. The industry benefits from the fact that many lawmakers are landlords or are involved in property development and management. Then there is the considerable influence of The Law Offices of Kirk Cullimore. Firm founder Kirk Cullimore senior is credited with helping write many of Utah’s landlord/tenant laws, while his son Kirk Cullimore Jr. is a state Senate leader and “government relations chair” for the Utah Apartment Association.

Data on Utah evictions by race is not available but the U.S. Census Bureau does track fear of evictions.

The agency produces surveys of renters in every state and asks how confident they are about being able to pay rent the next month. The answers for respondents in Utah show a stark difference between white and Latino renters.

For the week ending Jan. 18, more than half of white renters (54%) said they had high confidence they could pay the next month’s rent, compared to only 29% of Latino renters.

Among those who said they had “no confidence” they could pay rent the following month, only 6% of white renters responded things were so bleak compared to 11% of Latino renters.

The weekly surveys going back the previous six months track a similar disparate level of anxiety. White renters only twice had “no confidence levels” in the double digits, with a peak of 16% feeling they had no shot of paying rent for the coming month. Latino renters by contrast had 10 weeks of double-digit levels of no confidence. In early June for example, 43% of Latino renters responded they had “no confidence” in their ability to pay the next month’s rent.

The differences were just as stark for Utahns renting houses, with the most recent survey showing 53% of Latino renters in Utah feeling it was “very likely” they would have to leave their homes in the next two months due to eviction, compared to 16% of white home renters.

When Ivana Juarez was shown a model apartment in downtown Salt Lake City, she was impressed by how clean and cozy the unit was — plus it was an easy commute to her job at The Church Office Building of The Church of Jesus Christ of Latter-day Saints.

“The location is almost perfect,” Juarez said. “Instead of taking an hour to get to work it was about 10 to 15 minutes.”

The apartment she got in early 2020, however, was completely different than the model.

It was dirty, with a broken screen window and the smell of a dead animal wafting from underneath the fridge.

Juarez complained to the Salt Lake County Health Department, which she said told the landlord to fix many problems, including cleaning out cupboards encrusted with rat feces. When Juarez returned from work one day, however, she found the window screen had been installed improperly. And instead of the rat feces being cleaned up, it was simply painted over.

“It was just unbelievable,” said Juarez, who took photos to document the inept repairs.

Juarez promptly broke her lease and moved out. She later received a letter from the Law Offices of Kirk Cullimore threatening her with thousands of dollars in fees. There was even an eviction filed against her.

The law firm never told her, however, that the eviction was dismissed against her because a judge ruled she had received inadequate notice.

Juarez feels lucky to have escaped an apartment she considered inhabitable, but also acknowledges that a number of her Latino neighbors at the apartment complex were too scared to speak out.

She said the apartment manager was “very aggressive,” often threatening to take residents to court and posting notices on their doors that sometimes they couldn’t even read.

“I know there were a lot of Latinos there that felt trapped, like there was no place to go,” Juarez says.

Mapping out the racial fault lines that have swallowed up renters of color in Utah eviction cases is challenging when neither landlords nor courts track evictions by race. This was the puzzle facing Joél Arvizo-Zavala, a researcher working with the Utah Division of Multicultural Affairs and the Commission on Criminal and Juvenile Justice Services. Their solution was to map eviction rates by ZIP codes populated predominantly by residents who are Black, Indigenous and people of color (BIPOC).

Across an eight-month period in 2019 and 2020 Arvizo-Zavala’s team found over 80% of all Utah evictions occurring in these predominantly BIPOC ZIP codes.

“Disparity is what we’re measuring,” Arvizo-Zavala said, noting that while the research is just beginning, the patterns are very real and persistent.

For example, contrast the eviction rate of .62% in the 84109 ZIP code, on Salt Lake Valley’s eastern bench in the Millcreek area with that of 84116, covering the area of North Temple, and Fairpark and Rose Park neighborhoods, with an eviction rate of 3.7% — nearly six times as high. The east-side area has a BIPOC population of about 13%, compared to 63% in the west-side community.

Smith, of the apartment association, however, is firm that even simple translations of eviction law or renter information would be bad for landlords and thus not worth it. One argument he made was that if landlords provided agreements in different languages, they would then be obligated to pay for translators in court.

He also contended that even simple concepts like “three days to pay or vacate” could be lost in translation.

“It’s already complicated enough in one language, now you want it through multiple languages where words and concepts have different meanings? Now we just have a nightmare,” Smith said.

Smith bristled at the frequent depiction of landlords as villains and noted that in the 2020 legislative session, the association worked with renter advocates on a bill that helped promote distribution of forms to evicted tenants encouraging them to call 211, the state hotline that can connect people to rental assistance.

“We’re in the housing business and it’s not a broken system,” Smith said.

Smith defended a comment he made to another eviction attorney in the email provided to a reporter, one in which he discussed how renters had become accustomed to “landlords accommodating them and governments bailing them out.”

“I think that is a bad thing and pretty common across the board and a ‘reset’ of real consequences if they don’t take personal responsibility is probably a good thing,” Smith wrote. He also complained about landlords having to “babysit” tenants in helping them find assistance, and repeated a statement that a “clearing of the decks” would be necessary.

In an interview, Smith said there are many renters “ghosting” their landlords because they’ve become overreliant on rental assistance.

“Landlords have very thin [profit] margins and if they don’t stay on top of things, they could lose everything,” he said, noting that generally property owners realize about a 9% profit.

Although Smith acknowledged that evictions are costly for everyone, including landlords, he said he sees no need for special efforts to assure minority renters understand what they’re signing.

“We do not target any groups at all, all we do is enforce our rules” Smith said.

Researcher Arvizo-Zavala, however, hopes that policymakers will consider the data his team has compiled to understand that some communities need more help than others.

“We need policies and laws that are balanced,” Arvizo-Zavala said. “We need to give landlords an opportunity to evict who they need to evict, but similarly we need to give greater support to communities that have historically struggled.”