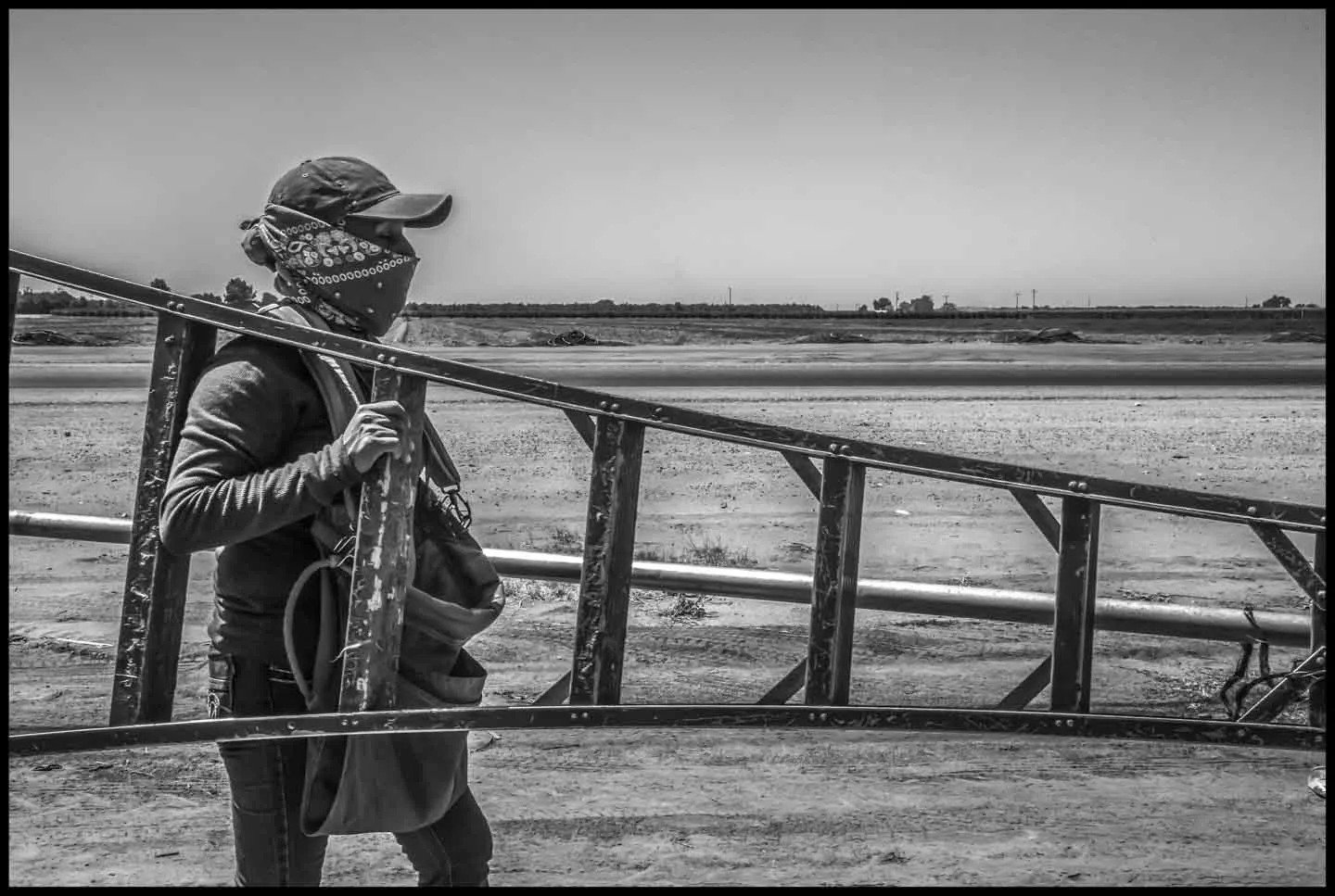 Erika carries her ladder from the row of trees she’s just finished picking, to the next row in Poplar. The ladder weighs about 30 pounds. Most women farmworkers normally wear some kind of face covering, usually a bandanna, while working in the fields. The bandanna protects against the sun and breathing dust, and even against sexual harassment. Since the beginning of the coronavirus crisis bandannas have become a protection against spreading Covid-19 as well. Photo by David Bacon
The Pandemic, Workers

In a time of so much uncertainty, one thing has emerged, crystalline, from this year-old pandemic: Being essential isn’t all it’s cracked up to be.

It’s great when you’re serenaded from fire escapes and applauded on the streets. But in the past we’ve had a funny way of moving from “essential” to “optional” once the emergency passes.

The last year has been a revelation for me in too many ways.

As a reporter over 60 years of age, I was forced to move the work I’ve always practiced as highly immersive and “high touch,” to endless days indoors, and to a distanced way of life. As a family man, I tried to keep tabs on my far-flung kids, my elderly father, and brothers and sisters and nieces and nephews. I worried about their safety in different ways.

As a Latino, I watched the predictable consequences of the types of work we do — our acute exposure to infection — and the simultaneous lack of access to insurance and health care. This combination created one pandemic for America, as a whole, and a custom-made kind of suffering for Brown and Black people.

As an American, I learned just how little so many of us really care about each other.

Being concentrated in certain industries, like food service, supermarkets, hospitals, home health care, and slaughter- and packing-houses, meant our work, early on, was declared “essential” to the priority task of keeping the national economy rolling. Yet  many of these workers receive low pay and low status. There’s something excruciating, and ironic, about risking illness and early death to do a job nobody else wants to do,  working for bosses who don’t want to pay a penny more to get it done if they can help it.

With  little savings as a cushion for bad times, and so little presence in the kind of jobs Americans could start doing from home, Latinos simply went to work. They killed chickens, picked cabbages, set IV lines, checked vital signs, cleaned subway cars, stocked supermarket shelves, and got COVID sufferers out of apartments onto ambulances and into ICUs.

“They wait too long to get help,” said Jesus Contreras, an emergency medical technician in the Houston area. He saw skyrocketing numbers of infections and death from COVID-19 up close, and the particular toll it was taking in Texas. A Latino is more likely to be uninsured in Texas than anywhere in the United States. After a diagnosis, or positive COVID test, Contreras said, “they are either a little skeptical, or they don’t get a good explanation of what the disease process is. So they wait too long to sound the alarm to get more help. They don’t know how sick is sick.”

Contreras spent part of last year with his eyes on Washington, D.C.: He waited on the knife edge for the Trump administration to declare its intentions. And, as he’s young and undocumented, he waited for the Supreme Court to announce its decision on Deferred Action for Childhood Arrivals, or DACA. At the same time, he was helping his community get through a crisis that was getting worse by the week.

His Latino patients, Contreras said, hated “having to be identified, having to be taken to the hospital. When they’ve got no insurance, a lot of the undocumented are afraid of $50-, or $100,000 bills from a stay in the ICU, and because of that they end up needing me. They’ve got sepsis, they’ve got pneumonia, mass infection, low oxygen. That’s when we have to do lifesaving procedures, because their illness is already advanced.”

Every time he jumped from his truck and came into contact with strangers, Contreras risked illness himself. “I mean, I understood that when I took the job, there would be risky situations. You’re at the scene of a car crash with traffic moving all around you. You’re at a house fire. You know there’s inherent risk in the job, but I never thought there would be this much risk for this long.” He called it “a chronic level of risk. And that led to chronic fatigue.”

I asked Contreras, brought to Texas from Tamaulipas, Mexico, as a 6-year-old, if he thought the work Latinos did through the pandemic could change the nature of the conversation about immigration reform. “I hope for the best. I hope people start to realize immigrants are essential to this country. I would never ask for a national emergency to happen so people can see that we are valuable and helpful to this country. We really are. I hope that resonates for the rest of the year.”

At the same time, too many of us couldn’t be bothered to make even the smallest concession to efforts to slow the spread of the disease. As stay-at-home orders were argued over in the Wisconsin Supreme Court, the chief justice noted that deaths in a specific county were “due to the meatpacking though. That’s where Brown County got the flare. It wasn`t just the regular folks in Brown County.” The Latino workers were keeping an industry going and helping America eat, but that didn’t qualify them to be among “regular folks” in the county where they live and work.

In the early weeks and months of the pandemic, as millions were losing work across the nation, many Latinos found themselves in an “essential worker trap.” Their labor was so necessary, their businesses were kept open. And, since their businesses were still open, they couldn’t collect unemployment if they withdrew from work to protect themselves.

In California, Latinos comprised more than half the identified infections, and almost half the deaths, while making up just a bit more than a third of the state’s residents. However, the numbers get really interesting when you look at age cohorts: As of March, Latinos in prime working years constituted 70% of the dead among 18- to 34-year-olds, and 73% of Californians 35 to 49 who died of the disease. Add in low rates of vaccination, rampant misinformation regarding the pandemic circulating in Spanish, and it becomes clear that for too many in this country,  their blues ain’t like ours.

Today, a new president sits in the Oval Office. He got the job thanks, in large measure, to Latino votes in pivotal states like Arizona, Nevada, Georgia, and Pennsylvania. Given the lack of care for each other that I found so depressing in this past year, it may be too early to look for a change in the heads and hearts of all Americans.

But let’s watch closely, now that President Biden has started talking about what the road back to normal looks like. Let’s see whether being essential has earned a substantial number of Latinos a shot at being valued, at being respected, and, maybe, at becoming citizens.

Ray Suarez is a co-host of the public radio program and podcast World Affairs, and a Washington reporter for Euronews.