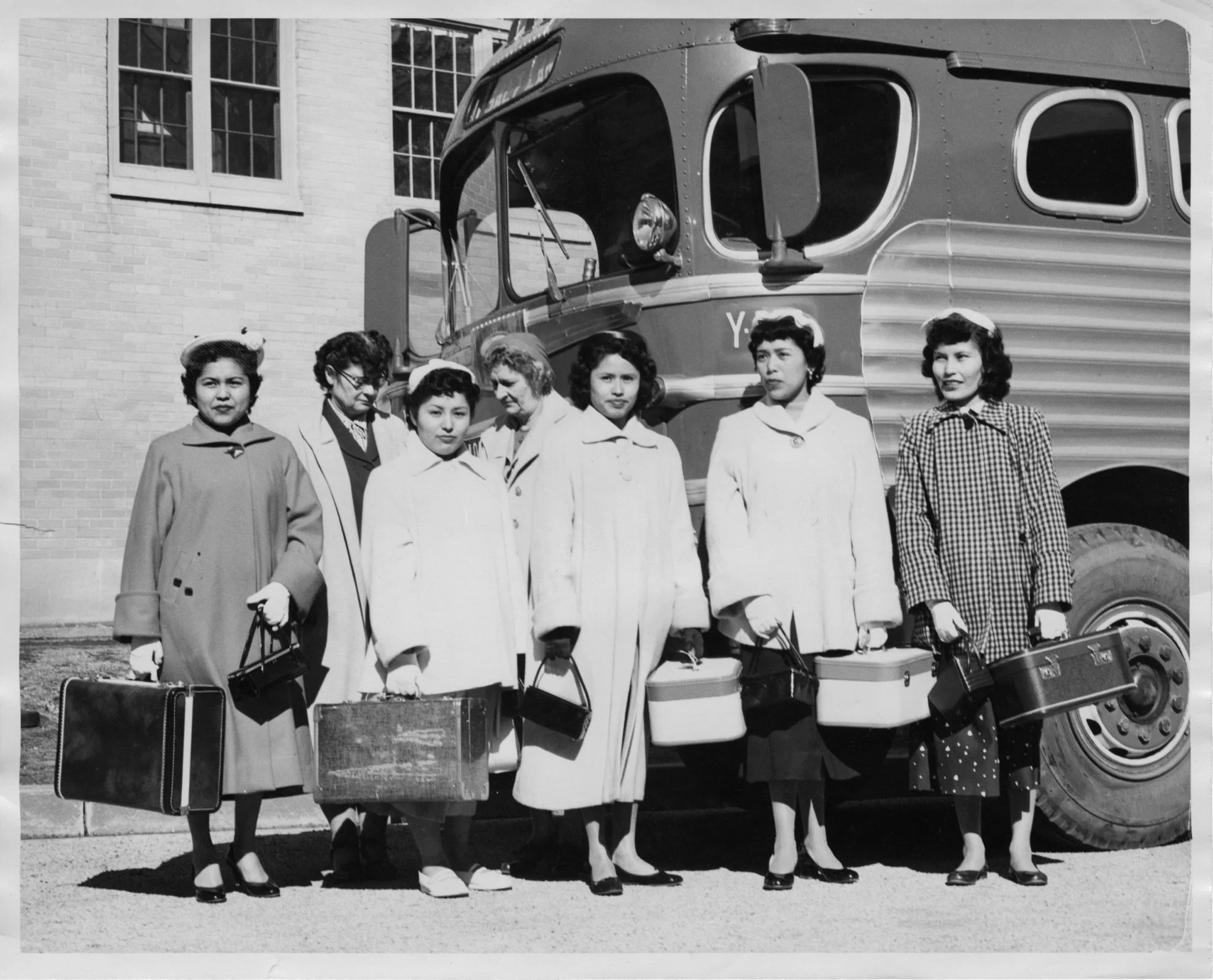 Native American women leaving for jobs in LA, 1956. In the 1950s, the federal government enacted policy designed to assimilate and relocate Indigenous people from their homelands to urban centers. Courtesy of National Archives and Records Administration
Culture

Identity Is A Major Factor In Our Indigenous Affairs Reporting

It was a simple follow-up question, a final fact check to an already finished story. Marie Crabb, who identifies as Mescalero Apache, is running for city council in San Antonio,  and appeared to be part of a wave of Indigenous women running for public office. In my capacity as an Indigenous Affairs reporter, I wanted to write about her historic run.

My question to her: “Would you call yourself a citizen or member of Mescalero Apache?” People across Indian Country differ on how they prefer to be identified: tribal member, tribal citizen, the responses always vary. Her answer, and subsequent answers, however, changed the entire story. She was not enrolled in the Mescalero Apache tribe, which prompted another question: Why not?

Being unenrolled isn’t necessarily a cause for concern as Indigenous identity is complex. Many Indigenous people grow up displaced from their communities at no fault of their own, and the reasons are many: genocide, assimilation, and termination policies enacted by the United States against Indigenous tribes and nations have cut off many families and individuals from their communities. According to the Association on American Indian Affairs, some 300 Indigenous tribes and nations are unrecognized by state or federal governments, and in some cases, people have been disenrolled from their tribes due to political or financial reasons. In other situations, blood quantum laws based on how much “Indian blood” one has have also pushed Indigenous people out of their communities. Then there are those who come from families forced to move to cities, or who have endured horrific adoption programs, or even come from families who left their communities and never wanted to return for whatever reason. This era of history in Indian Country is often colored by attempts to extirpate Indigenous peoples through policy or outright violence.

It’s with this history in mind that I tend to tread lightly when reporting and make every effort to be fair and understanding—especially being privileged to have grown up in my homelands, knowing my language and culture, and as an enrolled citizen of my nation. And it’s with these factors in mind that when a subject I interview is not enrolled, I take steps to establish connection: Who are your parents, grandparents or great-grandparents? Were they enrolled? Do you have any ties to members of the tribe you claim? Friends? Cousins? Would the tribe you claim, claim you back?

“I feel connected to my heritage in general,” Crabb said, “but not so much necessarily connected to the tribe.”

“Our unenrolled relatives know why they’re not enrolled,” says Kim TallBear, an association professor at the University of Alberta who researches belonging in Indigenous communities. “It’s not because they didn’t grow up going to ceremony or they didn’t grow up in the community. They have a sense of what these colonial artifices are, that they’re dealing with in tribal enrollment. But of course the broader public doesn’t have a clue about the details of how we do these things.”

In other words, relatives of ours, with real connections to Indigenous communities, can explain themselves, as well as the systems that have attempted to separate them from their tribes.

They typically don’t explain this lack of connection through “family lore.”

In my review of “Truly Texas Mexican” earlier this week, there was also the issue of family lore; of heritage and ancient claims to Indigeneity that could not be substantiated. In the film, this loose claim to Indigenous heritage was always talked about in the past tense, as if Indigenous people don’t exist.

The recurring question that has come up in my reporting, and the establishment of an Indigenous Affairs desk at the Texas Observer, is “What does it mean to be Indigenous in Texas?” The answer: It’s complicated, but verifiable.

In Crabb’s case, she says her father was Irish and that she knew her mother wasn’t an enrolled member of the Mescalero Apache tribe—something the tribe also confirmed. To her knowledge, neither her mother nor her grandparents had been adopted out, or participated in any Indian relocation programs, all real reasons for displacement and lack of connection. Crabb also told me that she had no social or family ties, no Mescalero regalia or jewelry that had been passed down, and had not participated in any cultural or spiritual events with Mescalero.

“You can talk all day long about your own individual identity as a person of Mescalero Apache ancestry; that it not at all the same as having relatives, relations and connections to a living community,” TallBear says.

It’s important to note that as a reporter, I am not here to police Indigeneity or be a gatekeeper of identity, but as the course of my story on Marie Crabb changed, I realized that there are times when individuals need to be held accountable. If elected, Crabb would have claimed the title of being the first Native American woman elected to San Antonio City Council, despite not having a single verifiable tie to the tribe. In “Truly Texas Mexican,” most of the individuals in the film fail to provide tangible evidence that their identification as Indigenous people exists in the present, despite the existence of 574 federally recognized tribal nations and another 300-plus struggling to gain a similar legal footing. Being an Indigenous person isn’t a costume to put on. In its most established, bureaucratic form, it’s a legal identity connected to treaty law and federal policy, complete with identification backed by the United States government. In its purest form, it’s a collective identity bound by a common history, language, culture, and most importantly, a complicated web of connections that help people establish their place in the world.

What does it mean to be an Indigenous person in what is currently the state of Texas? That answer will never be truly black or white, linear or binary. It’s a definition that can be expanded beyond tribal enrollment or blood quantum and is constantly changing and evolving. It’s the exploitation of that identity that must be examined, and where our work as reporters can have significant impact.

“Look for that language of locating Native in the past,” TallBear says. “To these people we exist in the past. They have no connection with a living community. So they’re always talking about heritage, and ancestry and referring to the past. What they’re doing, I think subconsciously, is only seeing us as dead bodies and dead ancestors. As artifacts of the past.”