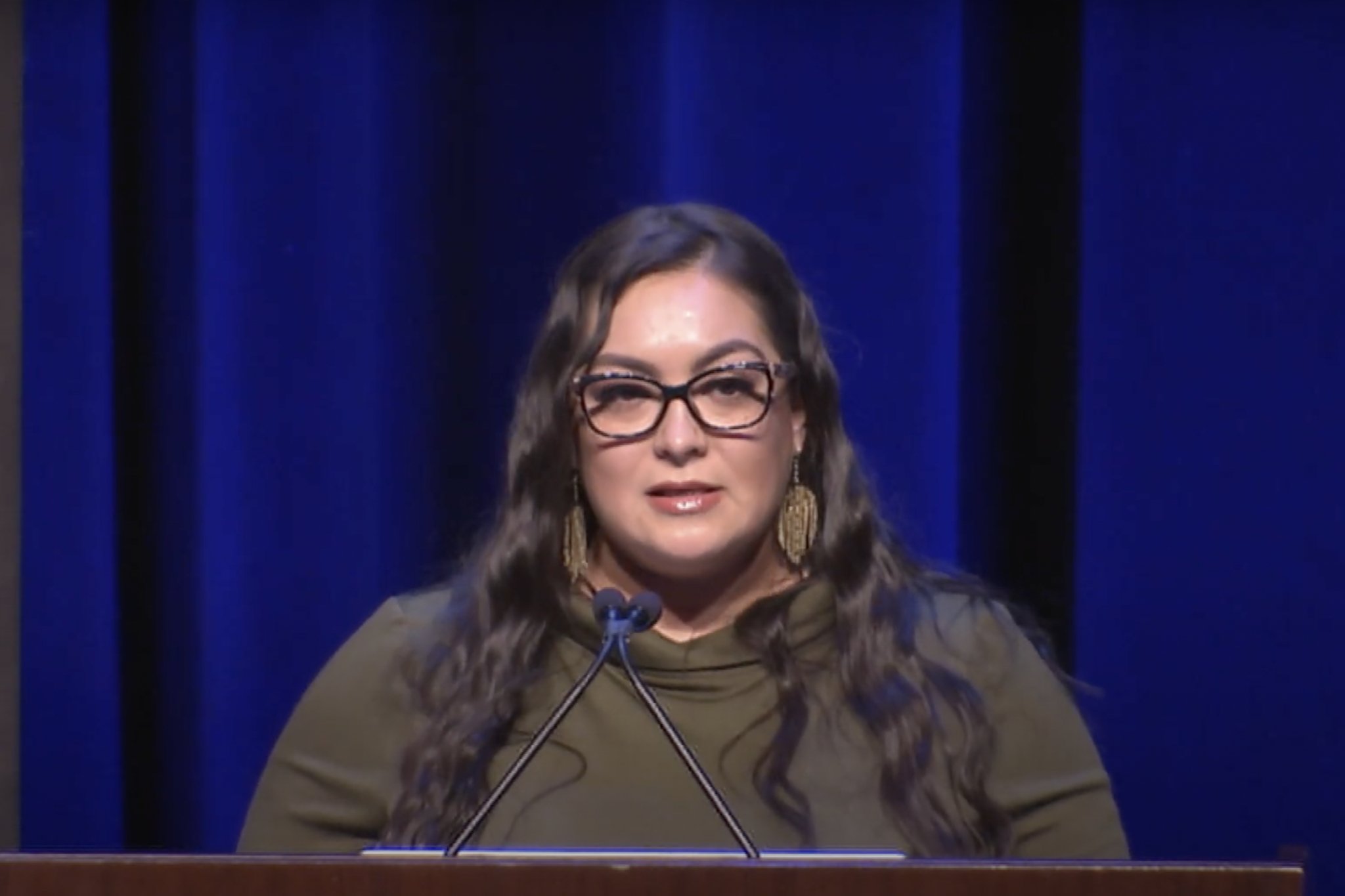 In early February, on a warm, sunny day, Marie Crabb left campaign literature for her neighbors in the Lone Star neighborhood on the south side of San Antonio. She wore a black cloth mask and a casual outfit with grey sneakers. At one point, she stopped to notice a person in a motorized wheelchair driving over a rocky, dirt path where a sidewalk should be.

“That man right there doesn’t even have the security of being able to drive on a sidewalk that’s going to protect him and his motorized wheelchair,” Crabb said. “He’s driving over dirt and rocks.”

Crabb is running for a spot on San Antonio’s city council representing District 5, and if elected on May 1, her campaign says she would be the first Indigenous woman on the council in the city’s history. Crabb identifies as Mescalero Apache, a federally recognized tribal nation based in south-central New Mexico and her run for office tracks with national trends of increased Indigenous political representation nationwide: 114 Indigenous people across the country ran for office in 2020, 67 of which were women. She has been active in San Antonio’s Indigenous community for years, even more so after becoming president of the Native American Students’ Association at St. Mary’s University in San Antonio, where she graduated with a criminal justice degree in 2008.

However, the Mescalero Apache tribe says that neither Crabb, nor her mother, is an enrolled tribal citizen. Tribal code requires members to provide proof of “one-fourth (1/4th) degree or more Mescalero Apache blood,” while applicants must also have one parent who is enrolled. Crabb has neither. As well, Crabb says she has no personal, cultural, or familial ties to link her to the Mescalero Apache, has never been in contact with people from Mescalero Apache, and has not participated in any cultural, spiritual, or linguistic activities connected to the tribe.

“It’s a different experience among the urban Indians and areas like San Antonio, because many of us don’t have tribal ties,” Crabb says. “I can understand looking for a tie or a cultural item or something, but that just wasn’t my life experience.”

“What makes it so controversial is when people are looking to benefit or profit by misusing their affiliation or not being truthful about their affiliation,” says Shannon O’Loughlin, chief executive and attorney for the Association on American Indian Affairs. “If people claim identity, if they are not politically or culturally connected, with the tribal nation they say they belong to, I think they owe an explanation about what their connection is.”

In 2020, the National Congress of the American Indian passed a resolution titled “Support for Requiring Proof of Tribal Enrollment for Artists Who Claim Native American Affiliations for Grants, Exhibition, and Cultural Arts Employment.” The resolution states that people in the arts and humanities often misrepresent themselves as Indigenous to garner grants and employment meant for Indigenous people. It goes on to say that many artists who claim to be Indigenous or have Indigenous affiliations are unable to prove it.

For federal employment, the Bureau of Indian Affairs and Indian Health Services have Indian preference policies that “allows certain persons of American Indian or Alaska Native descent to receive preference when appointments are made to vacancies in positions.” For tribal governments, Native-preference policies are also common, including at Ysleta Del Sur Pueblo in far West Texas and the Navajo Nation—the second largest tribal nation in the United States.

On a national level, family lore of claims to Indigeneity have played out with U.S. Senator Elizabeth Warren. In 1986, Warren listed herself as “American Indian” on the State Bar of Texas registration card while a professor of law at the University of Texas. For six years, Warren was listed as a Native American woman while tenured at Harvard Law School in diversity statistics, and the school even promoted her as Native American until 2011. It was only after she made her bid to become senator in 2012 that questions began to swirl around Warren’s identity.

“There are stories that are rampant throughout the United States of people with histories of ‘well, we’ve got some Indian in us, right?’ There is this prodigal Cherokee grandmother that seems to be all over the place,” says O’Loughlin.

In Canada, prominent film and television director Michelle Latimer’s claims to Indigeneity allowed her to access work and funding, but were questioned last year by the community she claimed to be a part of. Recently, Claudia Lawrence, in Seattle, posed as a Native American journalist publishing in the New York Times and Crosscut before also being questioned, and eventually withdrawing her claims.

Crabb was born in San Antonio, but growing up, Crabb, her sister, and her three brothers routinely moved between the city and the countryside due to their parents’ problems with alcohol dependency. “It was kind of a rocky time,” Crabb says. “There was always a lot of fighting between them and not a lot of stability.” It was during this time that her mother told her she was Mescalero Apache.

“Growing up was survival. So, there wasn’t time for me to be asking questions about where I came from or where this or that because I was just trying to survive,” Crabb says. “You have to take into consideration my mother was a severe alcoholic for most of my childhood. So, it wasn’t normal conversations that we had.”

In the DreamHour Speaker Series that happens annually as part of DreamWeek San Antonio to honor the life and legacy of Martin Luther King Jr., Crabb claimed to be Mescalero Apache this year. Her speech was held under “The Descendent Series,” which is meant to highlight the contributions of Black and Indigenous people “making America a global power—without recognition or compensation.” On her LinkedIn page and her company profile for Exquisite Properties, where she works as a realtor, she writes, “I am a proud Mescalero Apache.”

“Indigeneity is not binary and it’s not black and white,” says Gabe Galanda, an Indigenous rights attorney. “Due to the forces of colonization and neo-colonialism, such as tribal disenrollment, it is now a murky area in terms of who belongs to Indigenous society.”

“A person who is not a citizen can still belong culturally to an Indigenous society. They could live there. They could worship there. They could participate in cultural, even political activities there,” Galanda says. “Even though they may not have a piece of paper or card that says they are a citizen or member.”

To Crabb’s knowledge, neither her mother—who initially told Crabb she was Mescalero Apache as a child—nor her maternal grandparents, were adopted out of the Mescalero Apache community, taken by state or federal agencies, or a part of any urban relocation program. These are events that might offer at least some semblance of history to explain her claims.

In February, after a long day of work and campaigning, Crabb was in HEB looking at brussel sprouts and contemplating dinner, wearing her blue mask that had “vote” written across it in bold lettering. A young couple came up to ask if she was running for office—they recognized her by her mask.

The young woman had just watched Crabb’s speech for the DreamHour Speaker series. Seeing Crabb’s speech made her feel less lonely in a city where she felt out of place because she had just moved from her reservation in Oklahoma, Crabb recalled her saying.