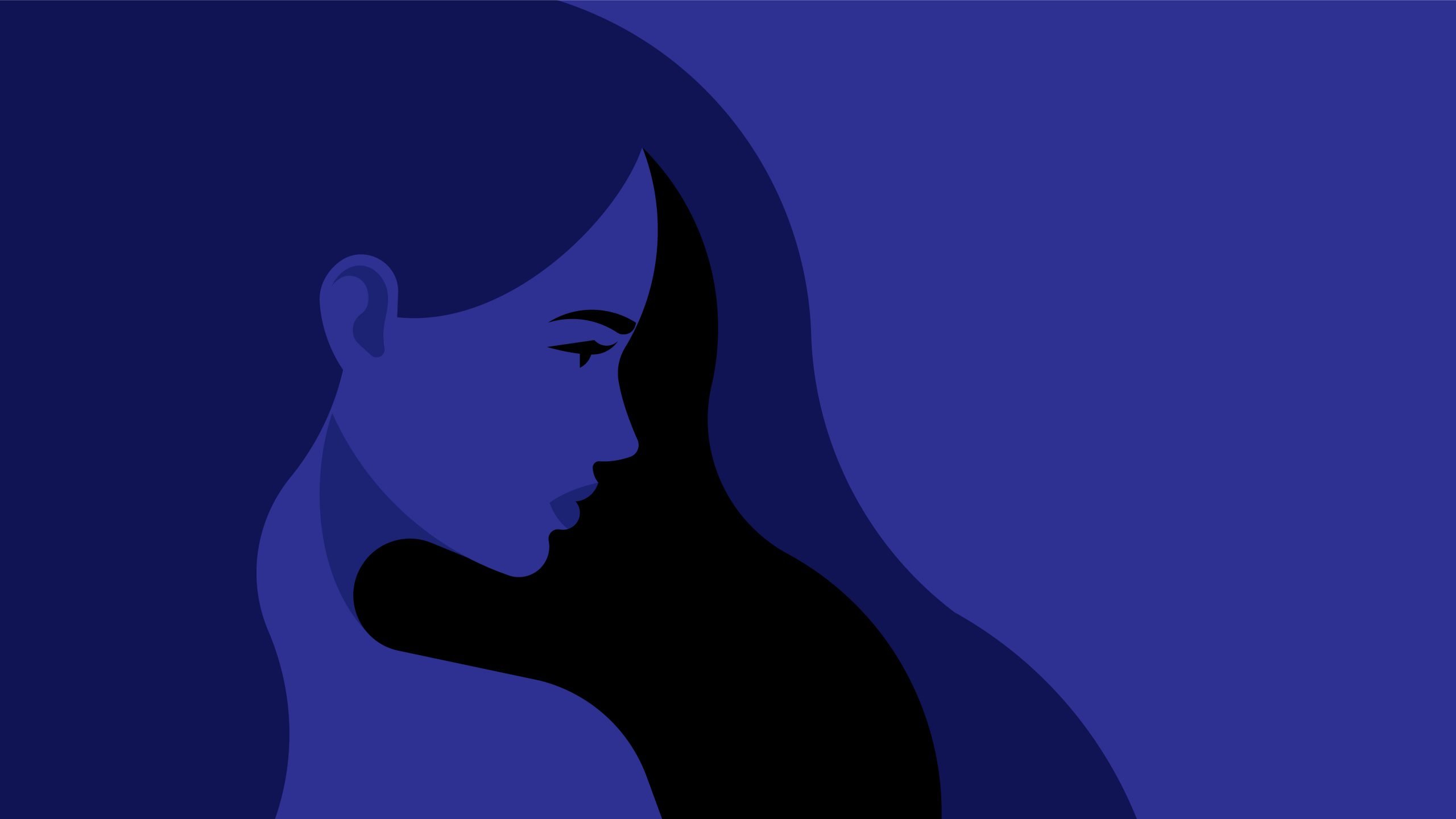 Illustration by Atlas Studio via Getty Images
Housing, The Pandemic

Shenna Buist was violently attacked by her boyfriend early last year. Drunk on tequila and beer, he grabbed her phone and took her car keys, then tackled her to the ground, at one point pinning her to the floor by her neck.

Finally, to get free of him, she bit his leg and escaped the apartment, bleeding from a cut on her hand.

“I had blood all over me and when I went outside the neighbors … called the cops,” Buist says.

Buist herself was charged by responding officers with misdemeanor assault and an infraction for disorderly conduct. Uintah County, however, declined to prosecute her and instead pressed forward with assault charges against her attacker.

The case against her violent ex would stretch on for months, but the eviction that stemmed from the assault — considered disturbing the peace under apartment rules — was swift.

“They said if I wasn’t gone by the next Monday they would have police there to assist me in leaving,” she says.

The eviction — like nearly half of those executed in the state last year — was filed by the Law Offices of Kirk Cullimore. And unlike the charges against her, which were dropped soon after the violent encounter with her ex, the eviction remains on her record and will taint her rental applications for years to come.

Utah has an eviction system so favorable to landlords that critics say it runs roughshod over renters.

The Law Offices of Kirk Cullimore are not shy about claiming a huge role in shaping and steering that system. “Mr. Cullimore directly wrote and work[ed] with the Legislature on almost all laws which currently exist relating to landlords and residential rentals,” the firm says on its website.

Founder and senior partner Kirk A. Cullimore was also a founder of The Utah Apartment Association that lobbies lawmakers on behalf of landlords, and his son, Kirk Cullimore Jr., is a Republican leader in the state Senate.

Advocates worry evictions can revictimize vulnerable Utahns, such as those facing domestic violence. Too often the loss of housing can be used as a legal weapon by abusers to cow partners into submission.

There are few state laws protecting Utahns in abusive relationships from evictions. Moreover, Marcus Degen, an attorney with Utah Legal Services, worries that a case under review now by the Utah Supreme Court could potentially make it easier for abusers to use evictions against their partners as retaliation for filing criminal complaints.

Protections under the Violence Against Women Act

The Violence Against Women Act (VAWA) was first passed in 1994 and was written by then-Sen. Joe Biden and co-sponsored at the time by Sen. Orrin Hatch, R-Utah.

“Domestic violence knows no boundaries; it affects every race, religion, and socioeconomic group,” Hatch said in testimony before a Senate committee in April 1993. “Violence in the home continues intergenerationally and often ends in death.”

The original bill provided numerous protections for women, including the provision that victims of domestic violence could not be evicted from public housing simply for having police called to the scene, as was the case for Buist.

The law lapsed in 2019, however, and was not reauthorized by the Senate. Nevertheless, the U.S. Department of Housing and Urban Development (HUD) still required housing complexes seeking federal rental assistance to comply with standards established in the law.

Tony Milner, Salt Lake City’s policy and program manager over housing and neighborhood development, oversees awarding of various emergency housing grants in the city to local service providers that are then given to landlords but benefit renters in crisis. In April of 2020, when apartments were required to keep adding a VAWA addendum to their leases to access the grant funding, they received pushback from one vocal source — the Law Offices of Kirk Cullimore.

“Cullimore’s office and the different apartments he worked for said, ‘Oh, [VAWA] expired, we don’t have to sign it,’ ” Milner said. The resistance was such that Milner’s office was forced to reach out directly to HUD for guidance. HUD came back with instructions confirming the need for continued compliance with VAWA guidelines.

Milner said the office has had to continue offering education to landlords about this requirement, but acknowledged that on occasion “we still get pushback.”

Milner also said that although Salt Lake City tries to work with landlords to get them in compliance, the only real enforcement mechanism to make sure landlords are following the VAWA guidelines are the courts. Unfortunately, renters facing evictions rarely have legal representation in the fast-moving process — data shows only 7% of evicted renters in 2020 had an attorney.

Jenn Oxborrow is a domestic violence advocate and executive director of Allies with Families. She said domestic violence in Utah is especially dire because of demographics that leave many women vulnerable. Combine Utah’s high birthrate and low-earning potential for women (with one of the nation’s biggest pay gaps) and you find large families where the mother is bound economically to abusive spouses.

“That’s really heartbreaking to think about how hard it would be to attain safe housing when [you] have a lot of children,” Oxborrow said. “And they’re much more likely to experience the most lethal forms of domestic violence, which have only escalated in the pandemic.”

The Utah Domestic Violence Coalition in October 2020 reported seeing a 25%-50% increase in domestic violence calls for service in the state during the pandemic.

Escaping from abuser, trapped in debt

Krista, knows the feeling. The mother of five from central Utah asked her real name not to be used to protect her identity and safety.

She had had a rocky relationship with her ex, including a contentious divorce filed over five years ago, punctuated by periodic attempts at reconciliation. In the fall of 2020 the couple thought they might be patching things up, when her partner got drunk and attacked her. Krista was struck and her partner also broke the leg of their young son’s dog.

Police removed her partner from the home but there was a problem — Krista had previously sold the home to a relative of her partner who had let her stay there, especially as the couple tried to repair their relationship for the sake of their family. But after her attacker was taken away, Krista was promptly served an eviction notice.

Krista felt she had to drop the domestic violence charge to appease her ex and gain better access in the custody dispute.

“I just didn’t have the money to keep fighting and going to court,” Krista said.

While the custody case slogs along, her eviction case shot forward. She and her kids are in a rural location so it took her months to find a new place nearby, and since she was previously a stay-at-home mom, she struggled to find work to pay her bills — including the thousands she now owes in back rent.

The judge in her case determined the amount based on a rental sign he saw on a house in the same neighborhood.

Now the sudden impact of that debt, plus the cost of moving to a new home has complicated her custody battles.

“I needed to show I could have a stable home,” she said. “Eventually I started picking up more jobs but now because I had to move 20 miles away they’re [using that against me].”

The Utah Supreme Court has established that the eviction, or “unlawful detainer,” statute is meant to be fast. It does this through speedy proceedings and the “severe remedy” of treble damages — a tripling of the amount of rent owed if the matter goes to court. Utah is only one of four states that triples the amount of damages, according to data from the Utah House Coalition. Nevada, Idaho and Montana are the others.

Degen, the attorney with Utah Legal Services, is concerned about how these speedy and severe measures can be weaponized against people as retaliation for reporting domestic violence. He is aware of Krista’s case as well as another client facing eviction (and treble damages and attorney fees) after calling police on her partner under similar circumstances. The attack in this second case took place in front of their child and resulted in the victim receiving permanent brain injuries.

Currently the Utah Supreme Court is reviewing a case, Martin v. Kristensen, that doesn’t involve domestic violence but could have serious consequences for victims.

The case involves a woman saddled with more than $900,000 in eviction damages for staying in a home she had previously shared with her ex. She remained in the home while fighting over assets in a divorce and a separate legal matter contending that she had been unlawfully coerced into selling the home to her ex’s family. As a result of losing her claim about the sale of the home, the court concluded that she had racked up years’ worth of treble damages and attorney fees under Utah’s eviction statute.

What troubles Degen is that the appellate court decided that the family could use fair-market value to determine how much back rent the woman owed for the time she remained in the home after receiving an eviction notice as an “at-will” tenant.

The sticky point Degen said is that the courts use the standard of “fair market” value when there is some kind of implied landlord-tenant relationship. But for a married couple there’s no such relationship, implied or otherwise.

He worries that if the justices side with the appellate court, it would cement into Utah law the ability of abusers to wield retaliatory evictions to more easily win hefty damages from partners they evict from the homes they once shared.

“Depending on how the Utah Supreme Court rules,” Degen said, “the burden in these cases could effectively be on the defendant-tenant to prove retaliation in order to defeat a massive damages claim.”

That burden of proof could be difficult, if not impossible, to meet.

Visit EvictedinUtah.com for a guide to locating legal and financial aid.

The state also has a 211 hotline for evicted tenants to connect them with rental assistance.