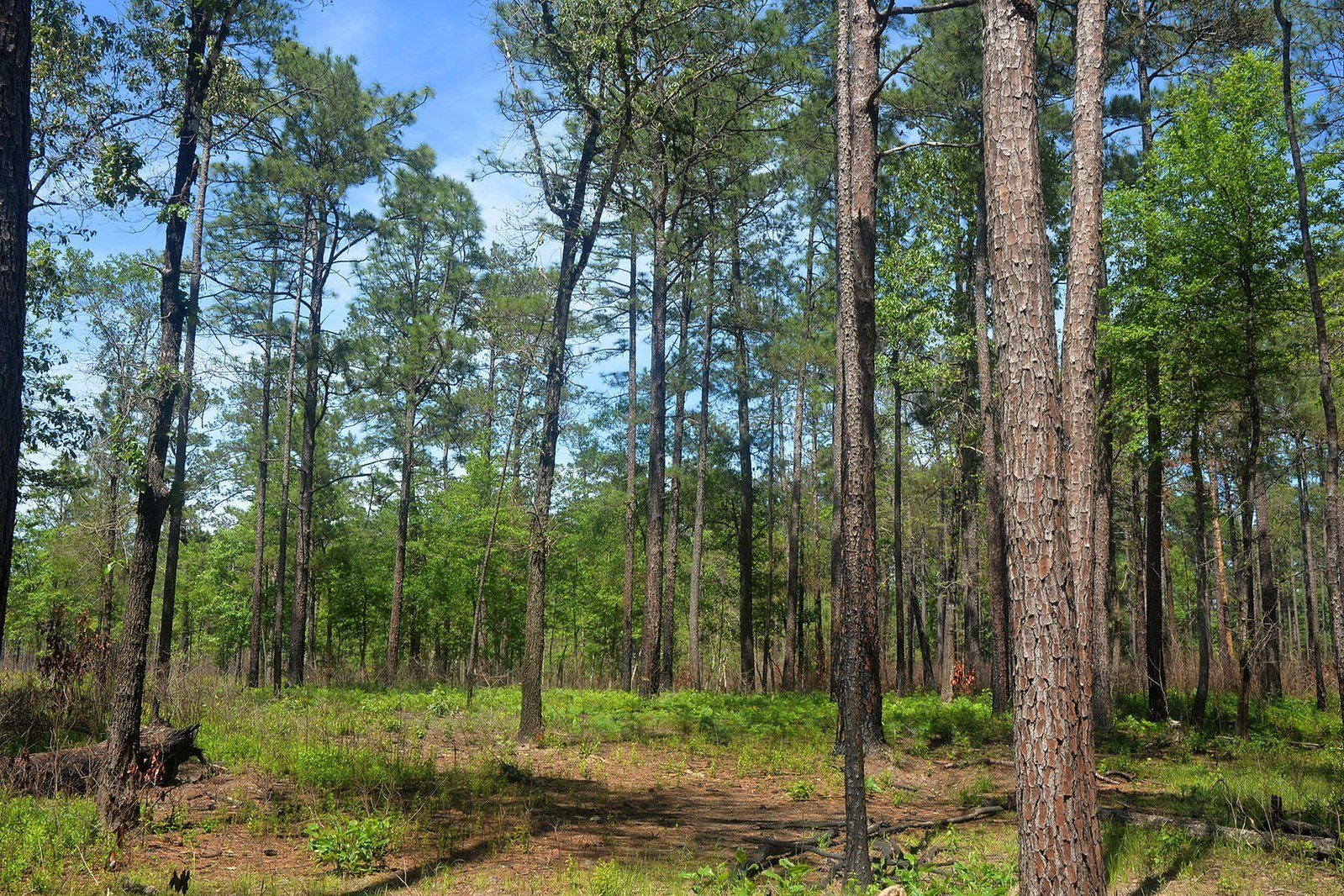 Without the Alabama-Coushatta's prescribed burns, longleaf pine can be choked out by competing underbrush. Photo by William L. Farr via Wikimedia Commons
Living

How the Alabama-Coushatta Use Fire to Save the Longleaf Pine

On a Wednesday in March, a cool, northerly breeze rustled through the pines. It was a good day for a fire. Gesse Bullock, a 16-year woodlands firefighter and burn boss for the Alabama-Coushatta Tribe of Texas, had prepared for weeks to run a controlled burn on 250 acres of forest just outside the town of Livingston, home to some of the last remaining longleaf pine trees in the state.

Until recently, the Alabama-Coushatta Tribe of Texas rarely did prescribed burns, because they weren’t legally allowed to, despite hundreds of years of managing the land. Doing prescribed burns requires a tribe to have wildland firefighters and the proper certifications from the state and federal government. It wasn’t until Bullock was hired that the tribe began to establish their land management program. “Historically, our woods used to be open and you could walk through it without getting eaten by the brush,” Bullock says.

Neither the county nor the state provide resources or firefighters to assist the tribe, but Bullock says that’s OK; his team of four gets support from other wildland firefighters provided by The Nature Conservancy and the Bureau of Indian Affairs. “Longleaf [pine] needs a lot of maintenance and is a very fire-tolerant, fire-dependent species,” Bullock says.

The Alabama-Coushatta have always used fire as a tool to maintain their lands and forests. Without it, the longleaf pine can be choked out by competing underbrush. For the tribe, who have long relied on, and revered, the longleaf pine, using its needles in medicine and weaving intricate baskets, preservation is critical. Currently, the tribe is working to preserve the forest and grow additional trees on 400 acres of tribal land. In an ecosystem that needs fire much like the Amazon rainforest needs rain, the actions of the tribe could decide the future of the longleaf pine.

Before settlers arrived in what is currently the United States, the longleaf pine reigned from East Texas all the way to the Atlantic Ocean, dominating the landscape and creating one of the most diverse ecosystems on the continent. Many of the trees lived as long as 500 years, their trunks up to three feet thick, with pine needles 12 to 18 inches long. But centuries of over-harvesting and clear cutting has left only 12,000 acres of old-growth longleaf pine forests scattered across the South; this represents an ecosystem decline of nearly 98 percent, surpassing the deforestation of the Amazon rainforest.

When a developing longleaf pine tree first sprouts, it can look like a patch of grass. In the center of that patch is a growing tip, protected by long pine needles. For the tree to grow beyond this grass stage, it needs fire. Once heat is applied, the tree sprouts quickly to five or six feet, its sapling phase. Drawing from soil made nutrient rich from ash, the tree will flourish.

“Longleaf saplings are just like the goofiest looking little trees that are like these gangly teenagers that have these weird little arms coming off,” says Charlotte Reemts, an ecologist for The Nature Conservancy. “They’re trying to figure out how to be a tree.”

The longleaf pine doesn’t doesn’t like competition— few plants do—so the tree rains pine needles down onto competing shrubs in the hopes of a spark that will turn to flames and take out competitors. The thick bark of the tree is usually unfazed by flame, and the burn patterns of needles on the forest floor—how fire jumps from one pile of needles to the next—shows researchers just how the tree manages competition. “It’s like, ‘Cool, everybody else is gone now. All the water and the resources are mine,’” Reemts says.

After a fire, with less competition, orchids tend to bloom. “That tree is just really emblematic of that whole southeastern coastal system,” Reemts says. “The tree has been shaped by thousands of years of fire and it also shapes the fire and its landscape.”

In the fall of 2019, Elliot Abbey slung a Bluebird flour sack with a strap made of fabric scraps over his shoulder. He had arrived at his favorite picking spot on the Alabama-Coushatta reservation with his wife and two young children to harvest longleaf pine needles—so many that by the end of the day, they had enough to fill two large plastic bins. “It is definitely enjoyable and definitely gives a day for the family to get out and harvest because it’s pretty much a family event for us,” he says.

Abbey is from the Coushatta Tribe of Louisiana while his wife and children are Alabama-Coushatta. They live on the Alabama-Coushatta lands in Texas. In the past, Abbey and other traditional basket weavers were forced to travel as far as Louisiana to harvest longleaf pine needles, but in 2019, the family was just 10 minutes from their home. It was the first time they could harvest nearby thanks to the tribe planting hundreds of longleaf pine trees. 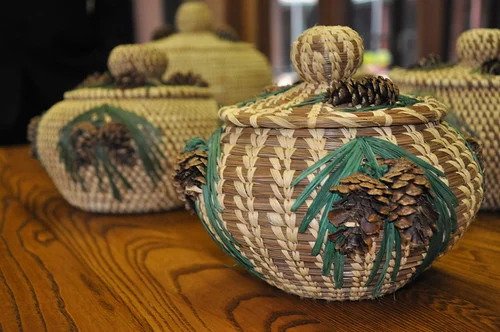 Finished baskets made with longleaf pine needles. Photo via U.S. Department of Agriculture

Abbey, 38, has been around weaving his whole life. As a child, he says he was a “gopher” for his four aunts who were basket weavers: He would “go for” coffee, fabric scraps, or anything else the matriarchs needed. As a young man he started making his own baskets using a single stitch, a more traditional style, that binds a small bundle of pine needles together using several single stitches in a checkered pattern across the baskets.

“The pine needles would imitate what you would see on a tree,” he says.

The baskets were traditionally used to store medicine, harvest local foods, to store corn during the winter, or to preserve foods. He also uses a more contemporary stitch pattern called the wheat stitch, creating a pattern of stalks of wheat climbing up the basket. The baskets can be adorned with pinecones. Newer baskets are green before turning a light beige as they age.

Abbey says the melody of the wind in the long pine needles is what he relishes most when he’s harvesting. “You are walking the same steps that at one point, before modern times, our tribes would go and walk through and do the same thing that we’re doing,” Abbey says. This experience is made possible by the reintroduction of controlled burns, like the one performed by Bullock.

On that cool, breezy day in March, the controlled burn weaved through the looming longleaf pine tree, cleaning out the undergrowth for new life to emerge from the ashes. Everything went as Bullock had planned.

“Initially things look black and then you’ll start to see these little sprouts of green coming up,” Reemts says. “And that’s all these plants who are just so happy that everything’s been cleaned out for them. They’re coming back and they’re just ready to start growing again.”

The Alabama-Coushatta will do two more controlled burns this year to support the longleaf pines they planted in 2012, which will continue to grow and reproduce, ensuring the tree, and everything it provides, survives for future generations.

Pauly Denetclaw is a citizen of the Navajo Nation and from Manuelito, New Mexico. She is Haltsooí (Meadow People) born for Kinyaa’áanii (Towering House People). Denetclaw is currently the Indigenous Affairs reporter for the Texas Observer.