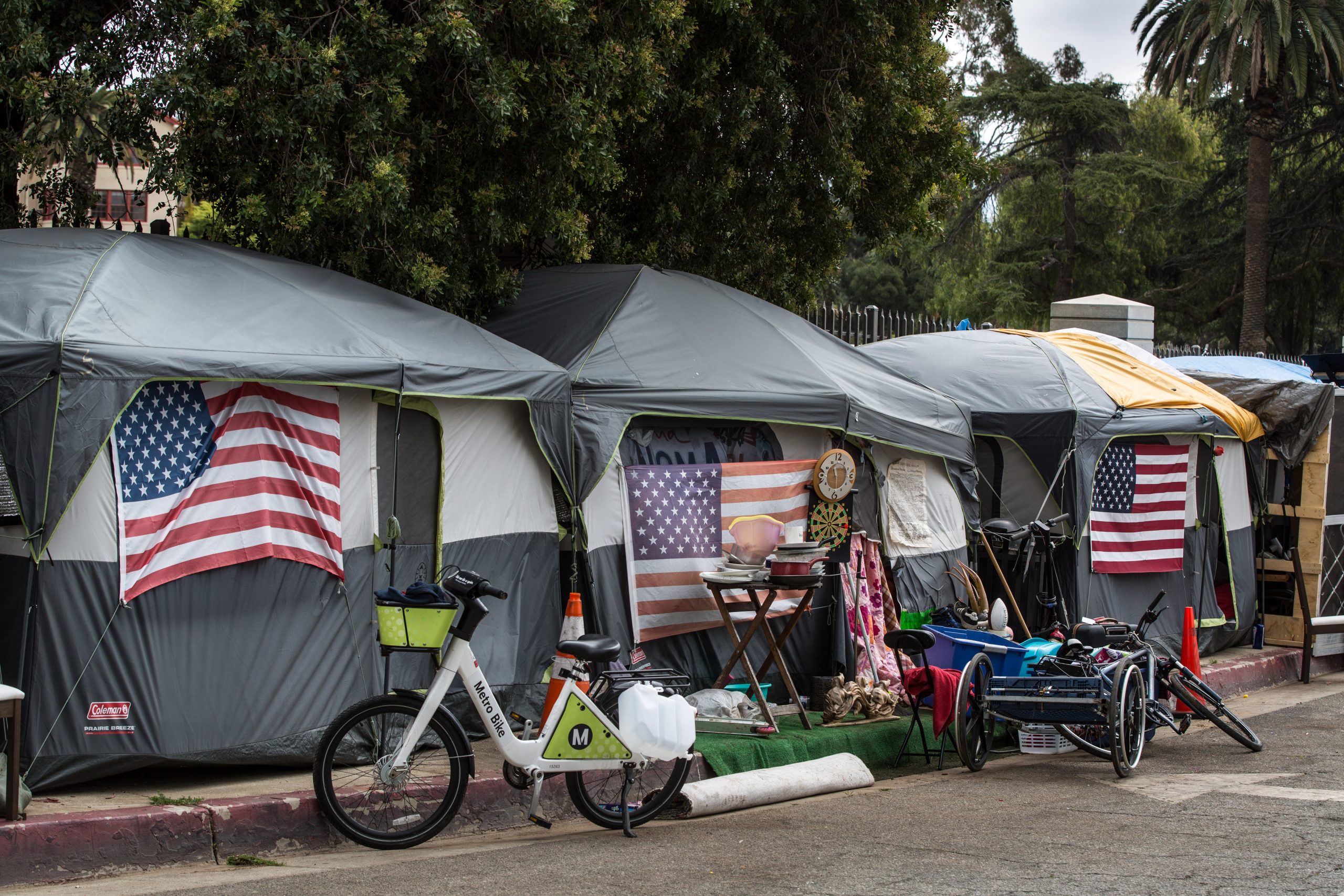 Homeless veterans are housed in 30 tents on a sidewalk along a busy San Vicente Boulevard outside the Veteran's Administration campus in West Los Angeles as viewed on April 22, 2021 in Los Angeles, California. During a 2020 count it was reported that there are an estimated 4,000 veterans living on the streets of Los Angeles. Photo by George Rose via Getty Images
Health, Housing

In 2006, I served as a U.S. Navy IT specialist aiding my ship’s mission of finding and neutralizing pirates off the coast of Somalia. Two years later, I was homeless, standing in a line in Gainesville, Florida that twisted around the block so I could donate blood in exchange for 20 bucks.

Many of the men waiting with me looked almost as bad as I did—all of us homeless and hungry. My hair was matted, crusted from dandruff, and my eyes were bloodshot. My fingers tingled because of withdrawal from the anti-anxiety medications I wasn’t getting from the Department of Veterans Affairs (VA). Between childhood trauma and my four years in the service, I relied on medications such as clonazepam, for anxiety, and Zoloft for PTSD, but the VA delivered my medication through the mail, and I hadn’t had a stable home for some time—I was couch surfing, car snoozing, or sleeping in the back of the restaurant where I worked. With no permanent address, my meds never found me.

Sadly, my situation was far from unique. On a single night in January 2020, 37,252 veterans were victims of homelessness. And the VA processes about 80 percent of veteran prescriptions by mail, so when a veteran loses their home, they often lose access to the medications their life depends on.

Veterans bear the physical and mental scars of military service, yet when they return home, many of us face a society ill-equipped to offer proper care. Instead, once a year, our country celebrates Veterans Day with parades, services and department store sales. But homeless veterans don’t need discounts; we need a system that protects them.

We need a comprehensive approach to care, one that ensures access to jobs, housing, medication and treatments that holistically address their needs. Instead, so many veterans who leave the tangle of war end up on America’s streets, still fighting daily for their survival.

This was the very fate I was trying to escape when I left the projects on Chicago’s South Side. I came from the Robert Taylor Homes, infamous for their brutality, murder, rape and drugs. On 9/11, I got swept up in the national patriotism that gripped the nation. At 15, I vowed to join the military to serve my country, knowing that if I died, at least it wouldn’t be on the streets. At 18, I enlisted in the Navy. I spent four years traveling the world engaged in goodwill missions, intelligence gathering and assistance with other military branches.

But this regimented life wore on me. I saw firsthand the misuse of American military power, our imperialist treatment of developing countries and the harm we inflicted on vulnerable people. It triggered a crisis of conscience and more trauma in my already depleted body. I was ready to return to civilian life.

I left under the impression that I could get any job I wanted. We heard it often—vets receive preference in the workforce—and high-skilled IT specialists like me held a special edge in the marketplace, I was told. I trusted that narrative. I applied to IBM, Google, Apple, and 50 other companies. I got one or two interviews, but neither led to a job.

I’m not the only one who has never seen this “military preference” play out in the job hunt. The truth hurts: That preference is a myth. Companies often don’t hire vets. They worry about whether or not we’ll be able to settle into normal jobs along with other stereotypes—that we all wear foil hats and fall back into flashbacks of war.

Three months after I left the Navy, I ended up a broken, broke man. I had to leave my apartment in Virginia because of an eviction notice, a car I couldn’t afford, jobs I couldn’t get. I was embarrassed.

I’d go on to spend the next five years living without a home, without psychological treatment or steady access to medications, just trying to stay alive. For the first three years, I lived in the South—Virginia, Florida, Alabama—mostly couch surfing. I grappled with layers of complex psychological trauma and distress, but I wasn’t getting properly diagnosed; the mental health treatment options in the South are very limited. Worse, like so many vets, I didn’t know about the benefits I was entitled to because the VA didn’t tell me. I spent years wrangling with the callous bureaucracy of the VA: dropped calls, rude receptionists, misinformation about benefits. On top of that, I faced the daily indignities of joblessness, homelessness and racism. As a Black man in the South, I felt smothered. I needed to get out. So when a friend in New York City offered me a place to stay, I saw my opportunity for a fresh start. A home. Treatment. A new beginning.

But he didn’t tell me the offer was good only for a month. After that, he kicked me out and I began living on the Brooklyn streets in the dead of winter. I still remember wearing white Converse low-tops stuffed with plastic bags on the insides in January, because that was the only footwear I owned. The one pair of pants I owned, black Levis, was never not wet. My thin black jacket was holding up like rice under a faucet. I would frequently find myself with my new friend Jeremy, also a Navy vet, drinking 40s on a stoop in Brooklyn; if you’re looking for ways to suppress your PTSD, malt liquor pairs well with self-hatred and regret. Inevitably, a cop would appear to harass us, an experience my fellow homeless vets and I grew familiar with, even after we identified ourselves as veterans.

It wasn’t just the cops. Violence stalks homeless veterans at every turn. When I slept in shelters, I was often sleeping in cots next to ex-cons with any number of offenses; according to HUD, over 50,000 people move directly from prison into a shelter every year.

Over time, I figured out how to work the VA’s system. I learned how to be persistent, how to be the squeakiest wheel. And that helped me access my GI Bill benefits, which allowed me to receive the Yellow Ribbon scholarship, enroll in classes at the New School and find an apartment with a new friend. My persistence helped me network with other veterans to learn about programs, therapies and group sessions that helped me rebuild my mental health. So many of us veterans are ignorant about VA programs and benefits because the VA fails to communicate with us, and often stonewalls us when we do inquire for help.

Programs do exist, but you have to know somebody. Or you need to call with the dogged persistence of a debt collector. It’s absurd to expect this from those of us barely scratching out our survival.

Depressed veterans calling the Veterans Suicide Hotline have had their calls dropped or gone directly to voicemail, a failure so rampant that a new bill was introduced this year to tackle these deficiencies. Veterans are yelled at by VA receptionists, rushed through appointments with doctors and, when we find ourselves houseless, the medications keeping us alive disappear into the mail system or sit unclaimed in pharmacies.

Instead of efficiency, scandals rock the department. In 2014, a scathing report showed that the department falsified medical waiting lists to cover up excessive wait times and delayed veteran care. More recently, in 2019, a whistleblower asserted yet again that the department’s official wait list contained just a fraction of the actual number of veterans waiting for care, which the department denied. That same year another whistleblower told Congress that the VA ordered her to schedule fake appointments for veterans in order to shorten the wait list. But the public shaming didn’t lead to reform.

In recent years, nonprofits have stepped in to fill in the gaps left by the VA, like Call of Duty Endowment, the National Coalition for Homeless Veterans, and Stackup. These efforts offer hope, but I can’t shake the fact that we have a VA funded by taxpayer dollars that is tasked with honoring the nation’s veterans with dignified care—and it’s failing at this.

I’m in a better place these days. I haven’t been homeless in years. I recently moved into a new apartment and I’ve carved out a nice writing career. But I’m still healing. With the pandemic, access to mental health continues to be a struggle. Sure, I can get my meds now, but with so many other vets vying for attention from therapists, I’ve repeatedly been told that there were none available.

So I turn to those in my life for support. My writing group. A few friends. My cat. Eventually, I’ll muster up the energy to make more calls to the VA, to seek out programs, to fight for my care. But it’s sad that it’s come to this. I left the military because I was done fighting.

Alex Miller has written for the New York Times, Washington Post, Newsweek, and the anthologies The Byline Bible and The Chicago Neighborhood Guidebook. He is working on a memoir. 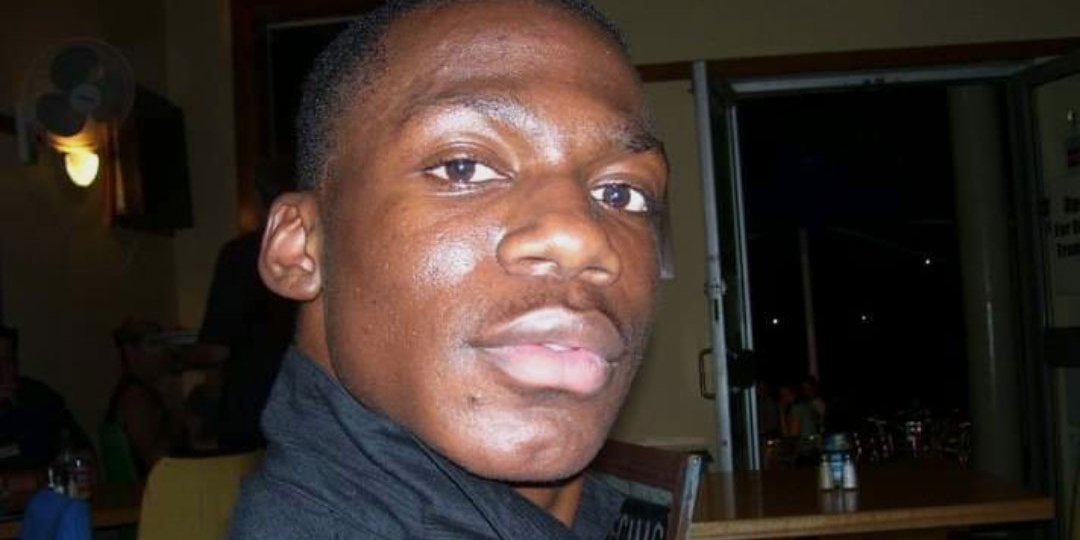 Alex is a Navy veteran and native Chicagoan. He’s been published in The New York Times, The Washington Post, Vox, and Wired. In addition, he has also been featured in the anthologies “The Byline Bible” and “The Chicago Neighborhood Guidebook.” He lives in New York and is writing a memoir.