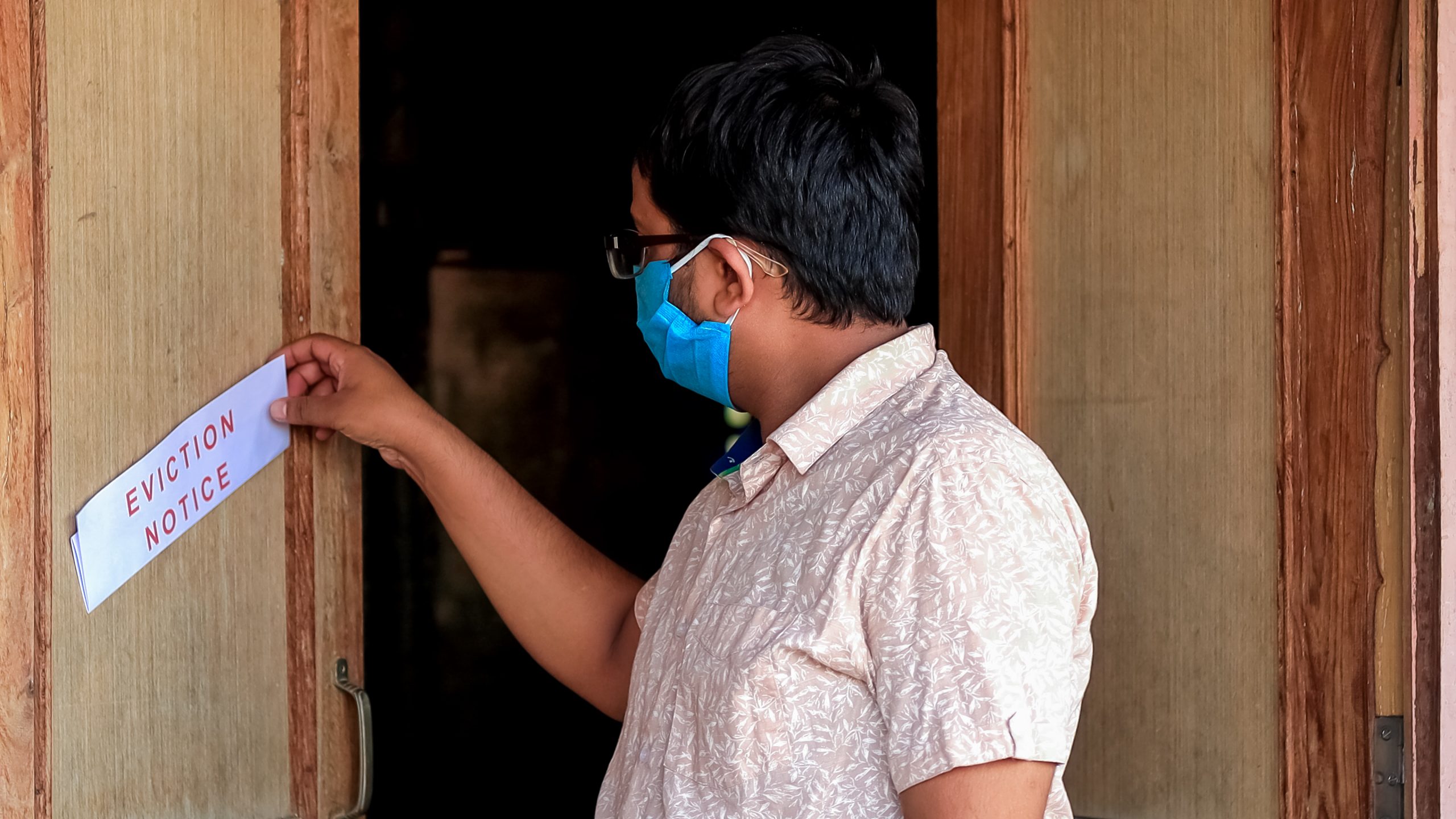 Photo by Siraj Ahmad via Getty Images
Housing, The Pandemic

The following story was supported by funding from The Economic Hardship Reporting Project and was reported by The Utah Investigative Journalism Project in partnership with The Salt Lake Tribune.

In January 2020 Albert Stringer’s landlord started posting eviction notices against him — not for missing rent but for not paying a small internet fee, despite him having repeatedly told the apartment’s managers that he did not use the internet.

Management continued to place notices every month for the next year and a half, each time with increasing charges because of added late fees.

He described one occasion when the landlord walked past him outside his apartment without saying anything and then let herself into his unit to see if he had started packing to leave yet.

Eventually, last spring, the landlord filed an eviction against him in court.

He considered it harassment. And Stringer had an attorney friend who helped him fight the eviction and file a counterclaim claim.

“The notices — that’s harassment,” Stringer said. “All it is, is a piece of paper, but that is a very powerful tool. That pen and that piece of paper can ruin a person’s life.”

Stringer’s attorney locked horns over the eviction with the apartment’s attorneys from The Law Offices of Kirk Cullimore, the firm that handles nearly half of all evictions in the state and has boasted of writing the state’s landlord-tenant laws. It also counts as a firm principal Sen. Kirk Cullimore, R-Sandy, the son of the firm’s founder and namesake. Stringer said the notices warned he owed thousands in late fees but once his case went to court, the complaint only claimed $336 in owed fees. Eventually he settled the dispute by agreeing to move out. He spent the next couple months using federal stimulus payments, savings and credit cards to move his small family from one hotel room to another.

Eviction notices like those that kept piling up against Stringer are more than just an irritant — in some cases they can be a tactic of harassment or intimidation of renters. In fact they may be a violation of federal law, the Utah Investigative Journalism Project has found.

The federal Coronavirus Aid, Relief, and Economic Security (CARES) Act requires that certain housing properties, such as those that offer low-income rentals under Section 8 or other assistance programs, are required to provide renters with 30-days eviction notice to pay or vacate — 10 times the three-day notice mandated in Utah’s landlord-friendly statute.

But in 69% of those cases records show landlords filed these notices days or even weeks after posting the more aggressive three-day pay or vacate eviction notice required by the state. Renters interviewed have confirmed that they didn’t even realize they had 30 days to scrape together past due rent, apply for assistance or even properly move out all their belongings.

On average, these 30-day notices weren’t filed until nine days after a three-day notice was served, according to court records.

The U.S. Department of Housing and Urban Development office oversees CARES Act properties and when asked about this practice HUD spokesperson Christine Bauman responded with provided this statement:

“HUD is currently in litigation with landlords regarding their CARES Act obligations. Accordingly, we have no comment at this time.”

The Law Offices of Kirk Cullimore acknowledged receipt of e-mailed questions for this article, but did not respond to any of them.

When Jennifer West and Jonathan Booher moved into the Ashford Apartments in early 2020 the west-side Salt Lake City complex was still called Eagles Landing and was in bad shape. There was a pool table and a swimming pool they paid amenity fees for that were never open and mailboxes were frequently broken into. Other residents complained of the water randomly shutting off for a full day at a time — an occurrence that happened multiple times a week.

Then a new company, the Dallas-based Lion Real Estate Group bought the property and renamed it the Ashford Apartments.

“As soon as they took over, anybody in the older models were being evicted because they wanted to remodel,” West said.

The couple were served a three-day eviction notice on Aug. 6, 2020. Struggling to find a new place, they stayed past the three days. Then on Aug. 18 they received the CARES Act notice, notifying them that they had 30 days to pay or vacate, relieving them of the worries of winding up homeless or having to leave behind belongings. The couple left before the 30 days were up.

Other Ashford residents didn’t stick around long enough to get the second notice and the temporary reprieve it brought.

Searra Boren was staying with her mother and her fiance when they received their three-day eviction notice on Sept. 8, 2020. The family quickly vacated to meet that deadline and Boren said that her mother “had to leave some stuff behind because she didn’t have enough time to grab it.” Abandoned in the scramble to move were couches, beds and assorted dishes.

The landlord posted the 30- days CARES Act notice on Sept. 11 — after the family had already left.

In another Ashford unit in the same complex, the tenant wasn’t provided a CARES Act notice until 12 days after the three-day eviction notice. Rent for that apartment went from $759 a month in February of 2020 based on the lease to $900 according to an online listing in April 2021.

Since these evictions, the Ashford painted the buildings’ exterior and appears to have made repairs to the water lines around the building. A representative for the Ashford stressed that the filing of notices was common practice and approved by the company’s attorneys at the Cullimore firm.

“Anything that was sent out was done at the direction of the attorney,” the manager said.

The Lion Real Estate Group responded to a request for comment for this story in a statement through public relations firm ProSek that did not address the allegation that renters were being evicted in order to remodel and hike rents. But ProSek defended the gap between the three-day eviction notices and the more generous 30-day CARES Act notices.

“Utah Courts have consistently interpreted that compliance with the CARES Act requires that a landlord first serve a 3 day pay-or-vacate notice,” the statement said. It added that oftentimes courts would give renters “3-14 additional days to vacate,” after the 30-Day CARES Act notice expired.

But the explanation ignores the fact that evicted renters rarely have lawyers to challenge these maneuvers. Court data shows that in 254 cases where Cullimore firm clients filed the CARES Act notices, in not a single case were renters represented by a defense attorney.

The explanation also sidesteps the fact that many renters say they knew nothing of the additional grace period to vacate and in more than a few cases had moved before this notice was provided. Boren said her landlord was even blunter in person than the written three-day eviction notice given to her and her mother.

“They said if she didn’t get out in three days the cops would move her out,” Boren recalled.

In the fall of 2020, while an eviction moratorium for nonpayment of rent was still in effect by the Centers for Disease Control and Prevention, a string of 14 evictions were executed at the Ashford Apartments, forcing out 21 renters in less than two months.

This is only part of the picture, however, because it only counts instances where the eviction went to court. The cases of renters who vacated immediately following a notice taped or tacked to their apartment door but prior to any court filing aren’t part of the public record.

Local leaders appear to have the power to demand a more complete picture. The “Good Landlord” program operated by Salt Lake City gives city officials the ability to review all eviction notices. This power could be an effective tool to monitor eviction practices — if it were ever used.

Salt Lake City, a majority renter city, has never requested to see notices filed by any apartment complex under the program.

Salt Lake City Mayor Erin Mendenhall declined an interview request, but in a statement from spokesperson Lindsey Nikola explained that the tool has not been used because the city lacks “dedicated staff to monitor landlords and their eviction filings.” She said the law originally was meant more to protect against bad renters than bad landlords.

“The City’s original goal for the program is primarily to help eliminate code violations and public nuisances while controlling and preventing illegal activity on rental properties that impact the quality of life within our neighborhoods,” Nikola said in the statement.

Still, Mendenhall supports the 30-day notice and the city continues to offer mediation services and has also “offered to waive business license fees to landlords who didn’t evict during the pandemic,” Nikola said.

The city has received 126 applications for the license waiver.

While the Good Landlord program may be designed for landlords it does only provide landlords with a license reduction fee if they comply with the ordinance. That means landlords must maintain units in compliance with building, fire, mechanical and plumbing codes. They must meet annually with tenants to hear concerns and can’t retaliate against tenants for reporting violations of their lease agreement.

Renters can contact Building Services for more information or to make complaints at 801-535-6000 or building.services@slcgov.com.

Silicon Valley to the Silicon Slopes

Utah’s tech-driven job growth and hot housing market follow a similar pattern that occurred in San Francisco in 2014, when the Anti-Eviction Mapping Project got its start, with the goal of just trying to map out the eviction hot spots in the city. The advocates in the group were dealing with the fallout from an explosive tech boom that brought wealthy tech workers into the city and pushed out existing residents.

“That’s the context of the mapping project emerging was this tech wealth boom 2.0,” says Manon Vergerio with the project. “There was a lot of wealth coming from the tech industry and the real estate industry wanted to capitalize on it.”

With Utah’s own Silicon Slopes and rocketing population growth, the state could be on a similar trajectory and be facing similar eviction challenges.

Utah has for the past year experienced record home prices, a factor that can lead to increased rental rates. Data shows that the median price of a single-family home in Salt Lake County rose to $530,000 in the second quarter of 2021, a nearly 29% increase from the same time a year ago. A recent report from the University of Utah also found that 72% of renters in the state said they were no longer able to afford a down payment and mortgage for an affordable home.

Vergerio has since moved to New York City where she continues the same endeavor — bringing transparency to the trends and patterns in evictions to help inform more equitable housing policies.

Through organizing with tenants to know their rights she and co-founder Erin McElroy stress that notices aren’t just pieces of paper.

“Eviction filings are absolutely a form of intimidation,” McElroy says.

If you are experiencing eviction please consider visiting evictedinutah.com, this site can explain your rights and refer you to local legal and advocacy groups that can help your situation and help you find further resources.