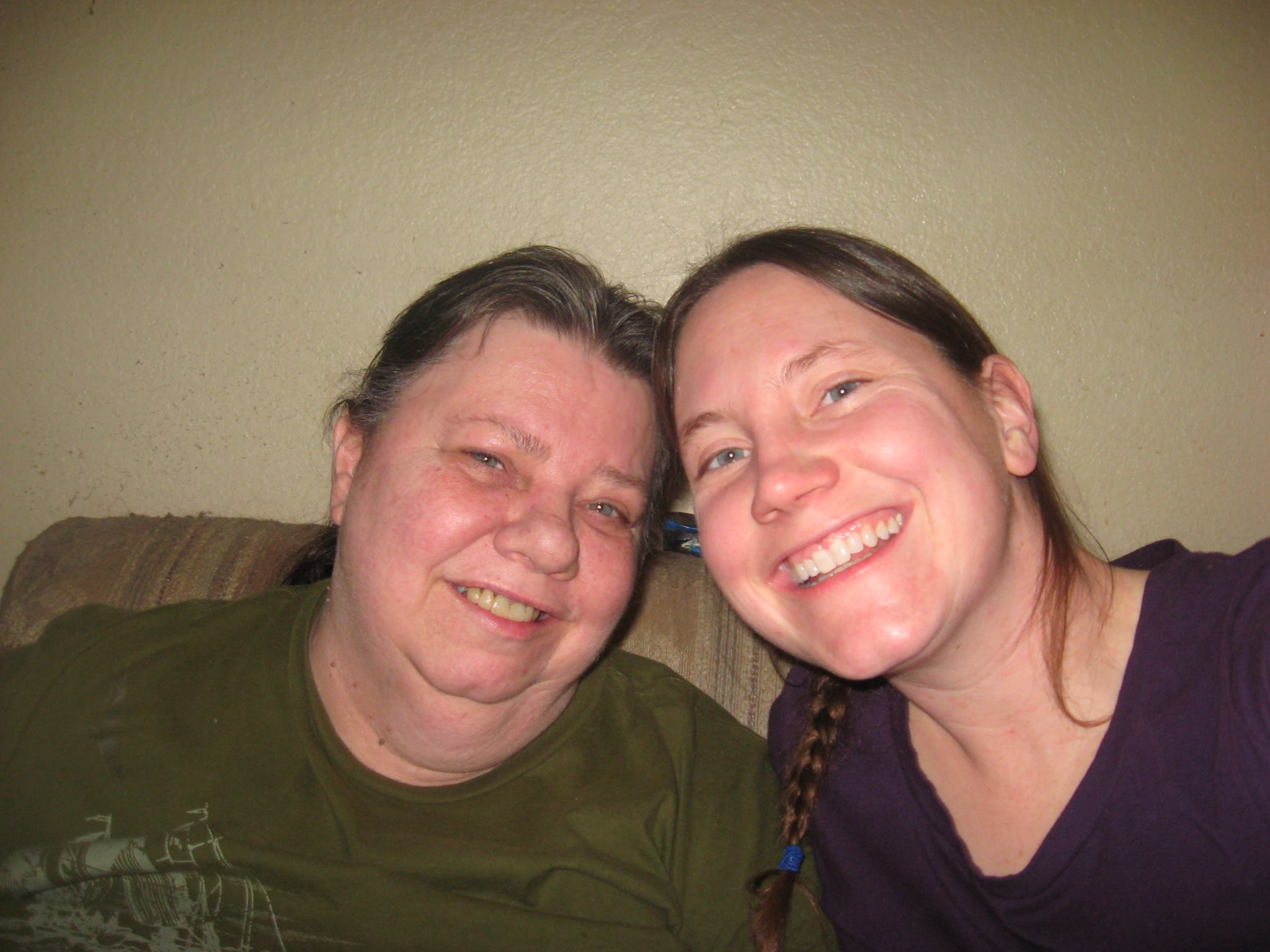 Autumn Stenberg remembers how her mother, suddenly and inexplicably jobless, showed up at Stenberg’s house all those years ago, ranting irrationally. She had been evicted and needed a place to live. And, she told her daughter, she wanted money to buy herself cigarettes.

Seventeen and pregnant, Stenberg didn’t know what to do. Her husband at the time was vehement in his pronouncement that Stenberg’s mother “was not welcome here.” So Stenberg dropped her mother off at a bus stop in Arlington, Wash.

“I said something along the lines of: ‘I’m sorry I can’t help you, you can’t stay with us,’” Stenberg said.

She remembers that it was dark and cold. But she can’t recall the month everything happened, Stenberg says; the exact timeline is “kind of blurry because of the trauma,” she said. “That was a really heartbreaking time for me.”

Ten years ago this month, Stenberg’s mother, Gloria Jean Kieffer, died of kidney failure at 62. She died in government-subsidized housing, but Stenberg is certain that the long-lasting trauma and never-ending isolation of her five years in abject homelessness, as well as the lack of resources associated with that isolation, is what killed her mother.

On this anniversary of her mother’s passing, Stenberg, now a parent-child educator for Early Head Start in Colville, Wash., shares how she continues to cope with “the weight of the responsibility of my mom having been unhoused.”

It is a burden of association that can not be encompassed by statistics.

Here is what is known: In January 2020, just before the spread of COVID-19, there were 580,466 people experiencing homelessness in America, according to the latest report from the U.S. Department of Housing and Urban Development (HUD). Anecdotal evidence from experts and advocates nationwide say that number is growing.

As for herself, Stenberg has never been homeless. “But I feel like I see myself in every homeless person I see,” she told me. It’s a recognition of the emotional and practical gyrations that so often come when someone you love is experiencing homelessness. It’s a pain that the 42-year-old works hard to release—she spends 8-10 hours a week on healing herself emotionally, she estimates.

She enrolled herself in training designed by trauma experts to help relieve her own suffering, and eventually, she hopes, the sufferings of others. She is also in therapy with a counselor who specializes in trauma. Stenberg also writes poetry about her relationship with her mother. She journals. She engages in specific tasks, like walking in the Colville Mountains, to help reduce her anxiety and keep away the desire to stay in bed all day.

Mostly, she says, the trauma of all that her mother experienced—and the residual trauma that she, herself still feels—can be summed up in one of three ways: depression, dissociation, or rage.

“I can sense it in my body,” Stenberg said. “It’s a sensation that I’m trapped in a chaotic environment and I can’t do anything about it.”

When Stenberg was 5 or 6—again she has trouble placing the date because of the trauma—her mother was abducted, beaten, and raped. After that, Gloria Jean Kieffer struggled to contain the experience, and it was as if she began to implode, her daughter says. She was in and out of psych wards, but never sought sustained help for her mental health, Stenberg says. Some of the most visceral memories that Stenberg has are of her mother’s unmitigated rage—at her, at her brother, at the world in general.

Stenberg married at 17, in part to flee the possibility of her own housing insecurity. For a short period of time, life worked. Her mother seemed stable, as she had child support and disability checks for her trauma-induced mental illnesses. She even held a job—the only one Stenberg can remember her having—as a telephone operator for a transportation company.

But then, 24 years ago, she suddenly quit her job, lost her housing and arrived at her daughter’s doorstep, demanding support Stenberg couldn’t give.

Stenberg doesn’t know a lot about the details of her mother’s homelessness, as communication was limited; Kieffer had no phone. But in 2000, five years after she appeared at Stenberg’s doorstep, when Stenberg was divorced and making enough money to house herself and her mother, the memories became a lot clearer.

Her mother did strange, inexplicable things in those years. Sometimes she broke panes of glass and left the shards scattered across the driveway of the homes where they lived, as if to reveal her own fragmentation. Sometimes she cut family pictures into tiny pieces. Once, Stenberg came home from one of her many jobs—“I was working like five jobs,” she said—”and my mom had a homeless gentleman sleeping in my bed.”

Stenberg relates these actions to homelessness and not solely to mental illness because of how her mother was ostracized by people for having been homeless and, as a result, the limitations of a tiny support system that never gave her the friendships and support she needed to thrive.

“Even her friends would say things to me like: ‘Your mom is just crazy,’” Stenberg said. “Homelessness is isolation.”

But Stenberg let her mother know that she wasn’t going to give up on her, and her mother began to relax in the safety of their relationship.

And in that, there were good times, Stenberg remembers. The two of them went for long drives in Kieffer’s Ford Ranger, near the west bank of the Snohomish River. Kieffer, who had a great sense of humor, entertained them by making up stories about the likely people and potential ghosts who lived in the houses they drove past. The two laughed a lot, knowing that neither one judged the other.

Then, in 2005, after waiting on a government-subsidized housing list for five years, Stenberg’s mother got approved to move into an apartment in Everett, Wash. And for another moment in time, Kieffer found stability.

But four years ago, Stenberg moved to the other side of the state. “I needed respite,” she said. Suddenly her mother’s support system became almost non-existent.

“In the end, she lived a very lonely life,” Stenberg said. “It makes me sad.”

Jeff Wallace, Stenberg’s therapist, says he is working with Stenberg through a therapeutic paradigm called Internal Family Systems (IFS), to help Stenberg “heal an exiled part of herself that carries some pain and is essentially frozen in time.”

Not everyone is as willing to let a writer talk with their therapist; Stenberg said she wants to help extend the knowledge of resources that might help others.

In their sessions, Stenberg and Wallace go back in time to the parts of Stenberg’s psyche that froze. Then they befriend those parts of her.

“Eventually Autumn will retire from Post-Traumatic Stress Disorder,” Wallace said. “She won’t have the sting of the past because she won’t have these defense mechanisms around past pains.”

Stenberg’s daughter, 23-year-old Aysia Arrell, who lives with her husband in Wenatchee, Wash., says she can see the internal work that her mother has done and how it provides a source of strength.

“She’s more grounded and she respects her own boundaries as well—if she feels herself becoming overwhelmed in a situation, she prioritizes herself, takes some time to decompress and works through her emotions,” Arrell said. “Everytime I see her, she is like an improved version of herself.”

Even in healing, Stenberg continues to carry her mother’s essence and their experiences with her. Last month, in the throes of a sleepless night, Stenberg couldn’t stop thinking about the increasing number of unhoused people that she was seeing throughout her community. One woman in particular with bright red hair, who perpetually stands with a backpack on Highway 395 near a Walmart, appeared in Stenberg’s mind.

Stenberg turned on her phone and began writing a poem she entitled, “Connection.”

This love,
Others may
judge in
The warmth
Of their homes
While others
Shiver in the cold

This love
Will test
Every ounce of
patience,
Every doubt and fear
In existence

Until we come to realize
Fear is an emotion
To befriend
doubt is a
Distraction
from love.

Lori Teresa Yearwood is a trauma-aware and trauma-sensitive journalist currently covering the U.S. housing crisis for The Economic Hardship Reporting Project. A former reporter for the Miami Herald, the St. Louis Post Dispatch and the Syracuse Newspapers, she has always written stories about people from populations that have been marginalized.