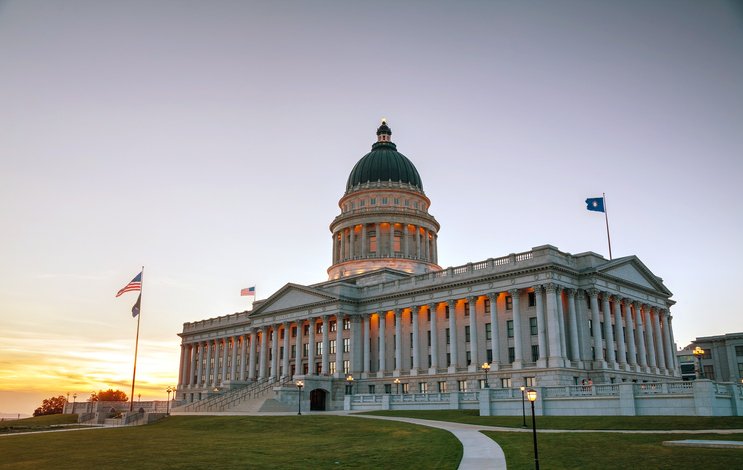 By Eric Peterson and Jennifer Greenlee

The following story was supported by funding from The Economic Hardship Reporting Project and was reported by The Utah Investigative Journalism Project in partnership with The Salt Lake Tribune.

Lacey Whyte knows all about the “scarlet E” that comes with having an eviction on your record and how difficult it makes it to get into new housing. She also knows that record will follow you even if you weren’t evicted. Even if you paid all that you owed. Even if you did everything right and had an eviction complaint against you dismissed.

Whyte and her family went through a bureaucratic nightmare with their landlord in 2015. A miscommunication led to a stack of fees, more than they could pay in one month. After some persuading, the landlord agreed to allow them to pay half of the past due fees with rent and the rest two weeks later. Whyte’s husband at the time was a full-time student, she worked and the couple kept busy with three children under the age of five. Amidst an already hectic home life, their landlord suddenly pretended like there was no payment agreement and brought an eviction complaint against them through his attorney at The Law Offices of Kirk Cullimore. The Cullimore firm files nearly half of all evictions in Utah, and firm partner Kirk Cullimore Jr. also does double duty as a Republican leader in the state Senate.

Whyte’s family was bluntly snubbed by the Cullimore firm when trying to explain the installment payment deal with the landlord. Luckily for them, Whyte’s aunt was a lawyer and when she showed the Cullimore firm documentation of the plan, they came to a settlement. The case was dismissed but Whyte still had to vacate the unit.

But when the young family applied to rent a new apartment they were told there was still an eviction on their record.

Whyte pleaded with the manager, offering to show her court documents proving the case was dismissed but the property manager flatly refused to even look at them.

“I’m like, I can’t fight anymore,” Whyte said recalling the conversation. “I feel like I’m just screaming into the wind.”

The family of five found themselves couch surfing until they were fortunate enough to be able to take over the lease on her parent’s place.

“If it weren’t for that, we would still be living in somebody’s basement,” Whyte said. In 2020 she tried unsuccessfully to get the record expunged but the Cullimore firm successfully beat back her request to seal the record.

This year a handful of bills aiding renters has emerged in the Legislature, but most face stiff opposition. One bill by Rep. Marsha Judkins, R-Provo, however, that would allow for the automatic expungement of eviction records like Whyte’s appears to have tentative support from her fellow Republicans and, more importantly, from the state’s powerful landlord lobby.

On the first day of the session, Paul Smith, executive director of the Utah Apartment Association, sent an email to landlord members of the association warning of multiple pieces of legislation. One by Rep. Jennifer Dailey-Provost, D-Salt Lake City, sought to allow renters to sue landlords for violations of their duties.

Another bill Smith warned of was renewed legislation by Rep. Gaylynn Bennion, D-Cottonwood Heights, that would require landlords to give 24 hours notice to enter apartments in almost all cases.

Dailey-Provost’s legislation, HB119, was heard in committee and was challenged by an eviction lawyer from the Cullimore firm, the Utah Apartment Association and a representative of the Utah Realtors Association. Provost had University of Utah law student Abigail Mower-Rampton help present the bill and explain how the current statute identifies duties of landlords, including not entering a renter’s apartment without 24 hours notice, not charging excessive fees and allowing the inspection of apartment units among others. But she noted the statute doesn’t allow renters to bring a cause of action for landlords that violate those duties.

“Why create a duty at all if there’s no remedy or accountability?” Mower-Rampton said.

Mike Ostermiller of the Utah Realtors Association countered that under current law tenants could still sue for “breach of contract” if their landlord violated the lease agreement. While advocates made their case for enhancing the legal protections, the House Business and Labor Committee disagreed. The committee didn’t even vote on to advance the bill but simply moved onto new business.

The brink of homelessness

Judkins’ expungement of eviction records bill would allow for evictions to be wiped from renters’ records once they had satisfied judgments for nonpayment or failure to move out when a lease was terminated.

“It’s a great tool to help landlords be made whole and give renters a second chance at the same time,” Smith wrote in a separate emailed statement to The Utah Investigative Journalism Project.

Judkins’ bill would also allow renters evicted for nuisance to be able to petition their landlord to expunge the record as well if they agreed to it. The bill would also allow for the automatic expungement of evictions where the complaint is dismissed like in Lacey Whyte’s case. It would also apply to renters who received emergency rental assistance because of the pandemic’s lingering wounds to the economy but still have evictions on their record even though the complaints were later dismissed. The bill would only apply to new evictions filed as of July 1, 2022.

She recognizes landlords’ need to vet renters, but added that it’s critical renters be given a second chance.

“I sympathize with both sides, but we need to try and take care of these vulnerable individuals and families that are on the brink of homelessness,” Judkins said.

Limiting when landlords can enter an apartment

Bennion’s bill, however, still faces a difficult battle, having been defeated in the 2021 session by a 50-20 vote in the House. The bill allows landlords access in emergencies but otherwise requires 24-hours notice to enter an apartment. Right now she says many rental leases require renters to allow landlords into their unit at any time without notice, a disturbing prospect for some renters with anxiety or mental health issues.

“They should feel safe and protected in their homes,” Bennion said.

In an email statement, Smith says the Utah Apartment Association wants to work with her on the bill and ensure landlords can still enter when they suspect criminal activity or lease violations are occurring or if repairs need to be made in the unit, especially when contractors need flexibility to get in promptly into a unit to fix something.

“[Landlords] should always try to give as much notice as possible.” Smith wrote. “But they have a duty not only to protect and maintain their asset (their property) but also the neighbors and other renters who live nearby.”

The real estate industry may be one of the most influential interest groups in state and local politics. In reviewing legislative conflict of interest forms and corporation records, The Utah Investigative Journalism Project identified 20 lawmakers involved in real estate either in development, property management, investments or legal practices like Cullimore’s eviction-heavy law practice.

That’s just the Legislature, a review of elected county officials turned up at least nine with real estate ties across eight of the state’s 29 counties.

Throw into the mix the industry’s tremendous political spending and its influence is undeniably potent. In 2020, the last midterm election year, the Utah Realtors Association PAC spent nearly $1.5 million in campaign donations and on campaign consulting, data, direct mailing and other services for industry friendly candidates and causes.

Dave Buhler is a political science professor at the University of Utah with a long pedigree in state and local politics, having served on the Salt Lake City Council in the early 2000s and previously as a Republican state senator in the ‘90s. He said the real estate profession has always been deeply entwined in Utah politics.

He recalled a Democratic senator trying to pass a renter-friendly bill at a time when lawmakers had to publicly disclose their conflicts of interest when speaking to a bill. He watched in amazement as one senator after another disclosed their involvement in the industry and then voted against the bill.

“I turned to one of my colleagues and I said, ‘I think you and I are the only ones that don’t have rental properties,’” Buhler recalled.

With a citizen legislature, Buhler said, it’s easier for people who may have their own business to be able to sacrifice the time to serve in public office compared to someone “punching a clock.”

But the primary reason for real-estate involvement is pretty straightforward, he added — “what government does affects them,” so they get involved at every level they can. At the local level it comes down to zoning and at the Legislature, taxes, transportation and other policies all impact the housing business.

“You see all the ways that state policy can affect those industries then it makes them really interested in having a say,” Buhler said.

Buhler acknowledged that while this industry provides expertise that can be vital, especially when it comes to planning for Utah’s explosive growth, it can also put some constituencies like renters at a distinct disadvantage.

A win for renters and landlords

While Smith plans on fighting Bennion’s bill, he’s still supportive of the expungement bill as a “win-win” for landlords and renters.

“People make mistakes. Life happens. We are happy to support a process for getting that mark off someone’s record who is working to make things right,” Smith wrote in an emailed statement. Judkins also is confident that the bill is a commonsense approach for renters who have paid for their past mistakes and would enable them to hope for a better future.

For Lacey White, that kind of hope is crucial.

“When you have followed through on your commitments and you weren’t in default, there’s just no reason for [having an eviction record],” Whyte said. “So, your sense of safety is just shattered.”