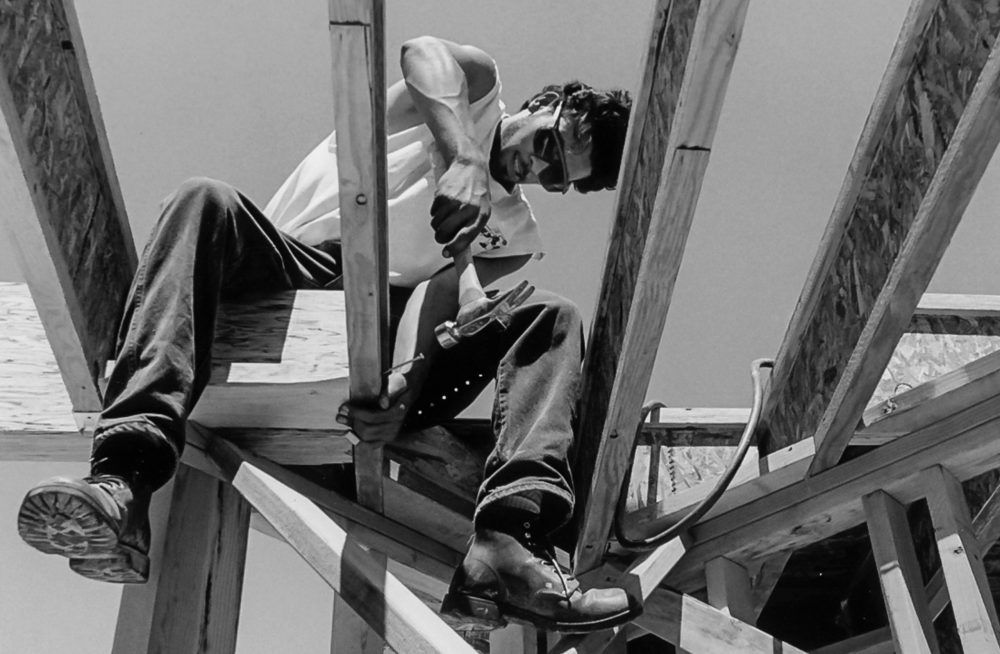 The Poetry of Labor: On Rodrigo Toscano and the Art of Work

The OSHA outreach trainer arrives in Walla Walla, Washington or in Pendleton, Oregon. If he flies to Tulsa or Tucson, he then drives up to 200 miles to wherever the union locals are. He is there to support immigrant worker centers as well as linemen and telecommunications workers, traveling so much that he can lose track of where exactly he is, teaching them how to protect themselves from being injured on the job. He will teach a 30-hour class sometimes, with anywhere from 12 to 40 students. He may ask them how many have suffered a heat-related illness on the job and all their hands go up. They tell him about people who have died or been maimed at work and recount their own near misses. Training here is not lip-service. It also is an ongoing effort to undo the lie that safety is employees’ responsibility, a truism overturned more than 50 years ago with the OSH Act of 1970.

What sets the trainer in these scenes apart is that he is also an acclaimed poet, Rodrigo Toscano, author of ten books of poetry, all quite different of one another. While his day job is as the national director of the non-profit the Labor Institute, for more than 25 years Rodrigo has also been known in the poetry scene for his highly accomplished, vigilant, even didactic poetry. It’s what tends to be called “experimental,” mostly because it’s both cerebral and relentlessly class-aware and political in a way that can make gatekeepers uncomfortable.

The 57-year-old’s verse, like the courses that empower workers that he sets up around the country, is poetry that engages with the world of work, including its impasses and oppressions. He tracks the places that refined—or literary and academic—language meets everyday speech, as in the poem below, “Linemen”:

The typical poetry reader may have recognized, post-Trump, that there are bubbles of American life, without always seeing that even their own bubble is sustained in part by political violence. That’s partly due to the limits within mainstream literary culture, as Rodrigo tells me, where the range of social class identities, work and educational experience, and even ideological affinities are entirely constrained. What a greater spectrum of the former might bring are poems with an awareness of work. Rodrigo’s poems published below, for example, can make the reader see how dependent they really are on the efforts of, say, linemen (“Lines that keep your identities well lit”).

The reader is most likely unaware of this.

Rodrigo is a rarity in today’s literary scene, partially because for much of the last 50 years, the labor of literary production has been siloed from other kinds of labor. There are reasons for this—reasons of norms and habits, as well as ideology. As Mark McGurl observes in his 2009 book, The Program Era: Postwar Fiction and the Rise of Creative Writing, American creative writing became synonymous with the university writing workshop. That narrowed not only the style and subject matter creative writers used but also narrowed who became “professional” writers in the first place, as the degree programs cost so damn much. (It’s hard to underestimate the effects of these programs, multiplying more than ten-fold to 854 creative writing degree programs from 79 in 1975.)

Rodrigo is very much not a product of this MFA regime. He was born in San Diego to a Chicano father and a Mexican national mother. His father was a tool salesman and Rodrigo and his brothers spent some of their childhoods bundling tools for their father. His father didn’t make much money, selling along the border, as the Mexican Peso was devalued at the time.

As a teenager from an economically stressed family, Rodrigo didn’t do particularly well in high school, although he was already a self-described autodidact, reading advanced political philosophy on his own. He was not college-tracked so when he graduated from high school, he launched into a job where he manufactured circuit boards in a factory. At the same time, he was “taking care of my own education,” as he puts it, informally (the use of the care economy to describe self-education seems apropos.) Rodrigo was, in this sense, already “swapping out,” as he writes in one poem, an earlier way of thinking for a more useful new framework:

When I met Rodrigo in the 1990s, he’d already probably “swapped out” several sets of ideas and ways of being for other ones. I remember he wore a natty wool cap and coined words at a fast pace. (Chance within youth often directs you, as if you were a piece on an Ouija board: it had arranged our meeting at my 23rd birthday party in an East Village club.)

After many years in Brooklyn, he now lives in New Orleans, that rare example of a city where a poet and a labor worker might afford to own a house. When I talked to him the other week on the phone, Rodrigo was still coining words, making up the word “monosectoral” to meet the needs of our conversation—to describe how little economic, class, labor, and ideological diversity there is in our literary society and how little that sphere is concerned with issues that people in other industries have to face, including injury. (This “monosectoralism” can be said to be true of journalists also.) I now will use this word myself.

Perhaps what we need to triumph over literary society’s monosectoral vision is to do what Rodrigo writes about in his poem “Swapping Out,” which like so many of his poems is achieved, demotic and immaculate, and as art sometimes electrifying. Rodrigo writes here that when “something’s not working” we should take the givens—of how labor is treated, and the norms of our creative writing sphere—and “Swap that shit out,” as Rodrigo writes, “let’s get moving.”

Thirty thousand linemen in bucket trucks
Streaming into your distressed environs
Hitting sixteen-hour shifts, repairing
Lines that keep your identities well lit
The lines that give your powered distinctions
The punch they need to remain—aesthetic.
That is, when the lines are down, days on end
Your projects oblivious to these men
And the striving families they’re part of
Start losing power, hour by hour.
By around the fifth day, you’re like the rest
Overheated, exhausted, half crazy
And perhaps becoming dimly aware
Linemen have zero power in the arts. 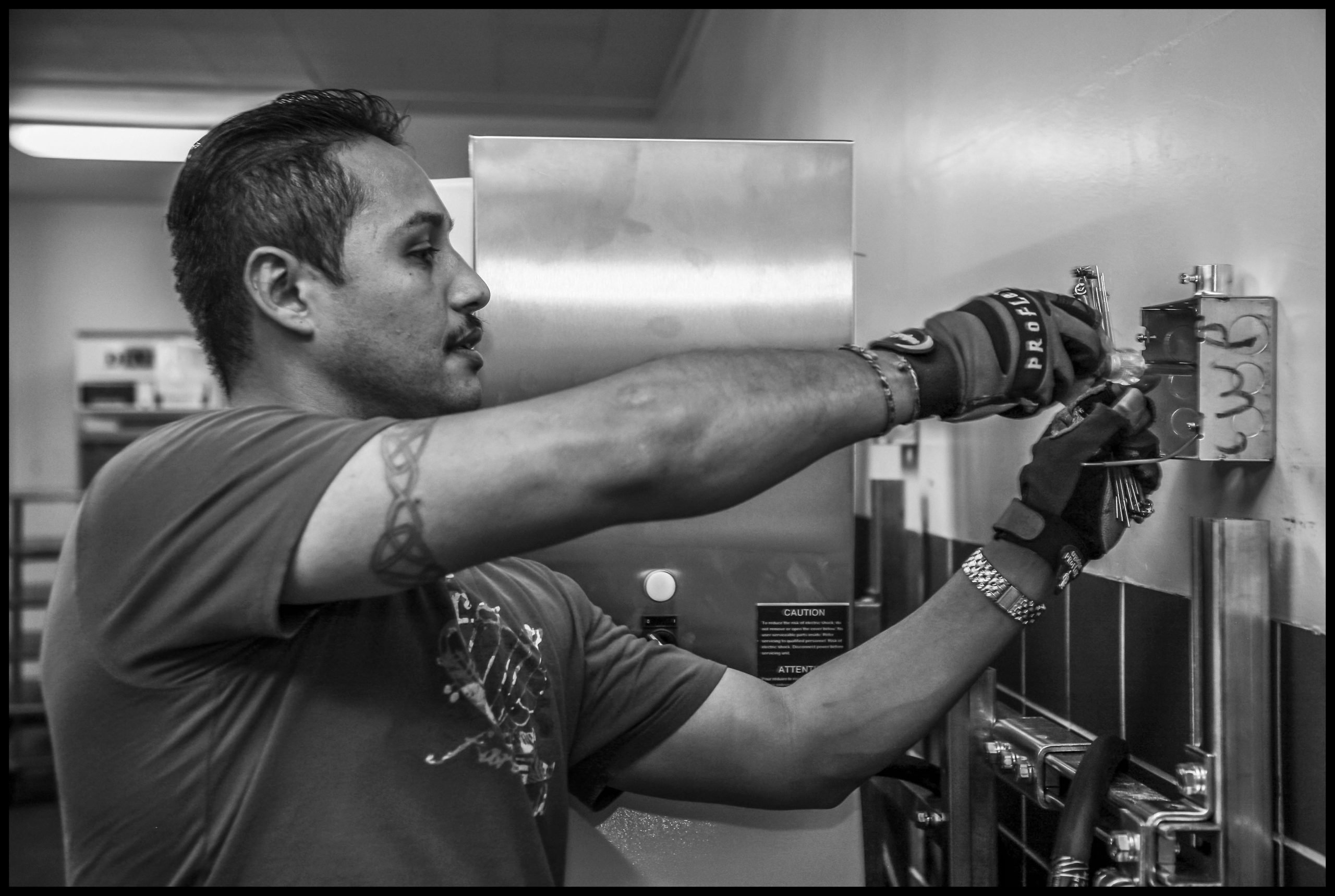 God (yes, god) an uprooted fence, that one
Went on a ride during the hurricane
It was wild, it was also destructive
But only to people who love fences
And want them in place, dug in dutifully
Not flying around, god (yes, god) hurling
Smashing into shit, conjuring spirits
Muscular movements managing messes
The holes re-dug, the posts re-positioned
God (yes, god) hadn’t dreamt of Hondurans
Before the wild flying, the flopping down
How battalions of migrants stand sturdy
Steadily regirding the wrecked city
Alongside good neighbors, resurrected 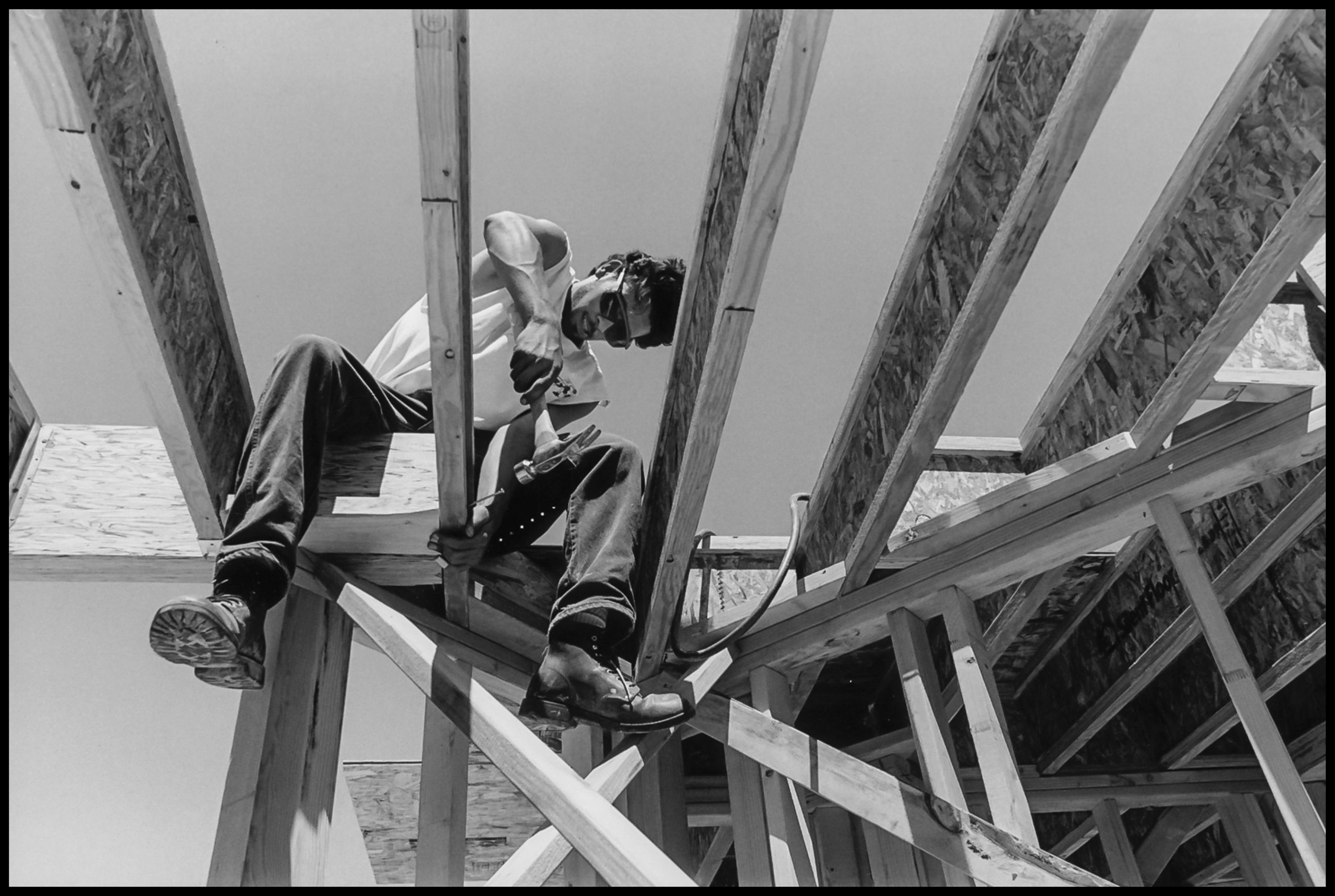 Behold (is an old word
meant to—behold
what’s beholden
to something
say, this tub faucet)

The water that flows
is a cut point
the pipes that held it
are cut points
the dam, the dials

No matter, the trashmen
have arrived
on top of the marvel of
a no. 2 pencil
tracking the point 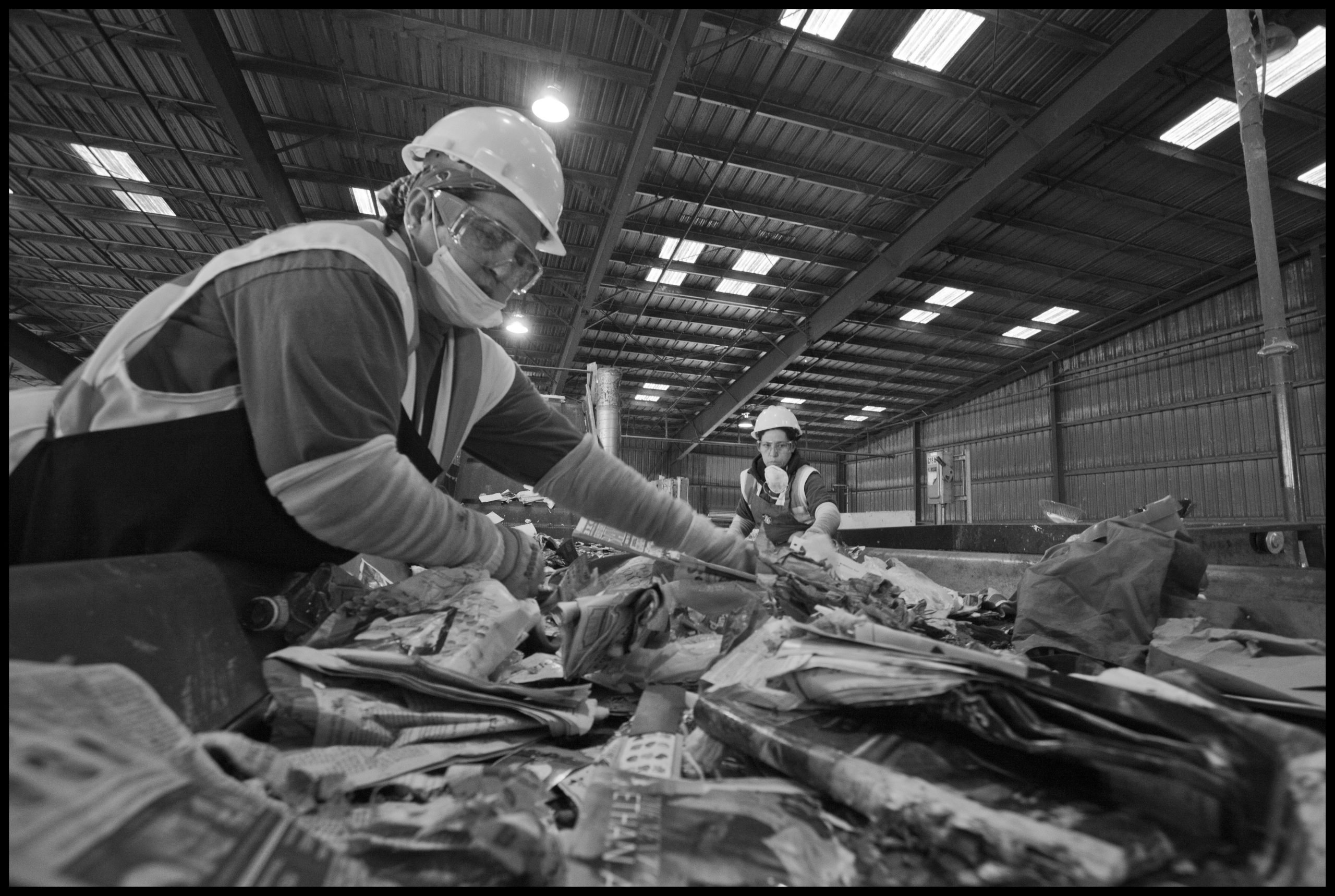 There’s no phrase in the entire English tongue
That gives me the tingles more than “swap out.”
Working folks don’t trade up, let alone, down
They simply—swap out, shit, folks, ideas.
Something’s not working? Have you tried and tried?
Ok! Swap that shit out—let’s get moving.
But the problem is, where get the parts, and how?
Let alone, at the time when you need them.
But even this tune of have-nots and haves
Is something folks swap out, if the tale’s stale.
Working folks, you’ve noticed, prefer new things
Things they’ve thingified to—thingaramas.
There’s another phrase that’s kin to “swap out”
And that is­­­, “crap out”, most folks just—crap out.

Alissa Quart is the executive director of the Economic Hardship Reporting Project. She is the author of the poetry collection Monetized and four non-fiction books: Squeezed: Why Our Families Can’t Afford America, Republic of Outsiders, Hothouse Kids, and Branded: The Buying and Selling of Teenagers. Her poems have appeared in Granta, the London Review of Books, and The Nation, among many other publications.

Rodrigo Toscano is a poet and essayist based in New Orleans. He is the author of ten books of poetry. His latest book is The Charm & The Dread (Fence Books, 2022). His previous books include In Range, Explosion Rocks Springfield, Deck of Deeds, Collapsible Poetics Theater (a National Poetry Series selection), To Leveling Swerve, Platform, Partisans, and The Disparities. His poetry has appeared in over 20 anthologies, including Best American Poetry and Best American Experimental Poetry (BAX).

David Bacon is a writer and photographer, former factory worker and union organizer. He documents workers, migration, and the struggle for human rights.