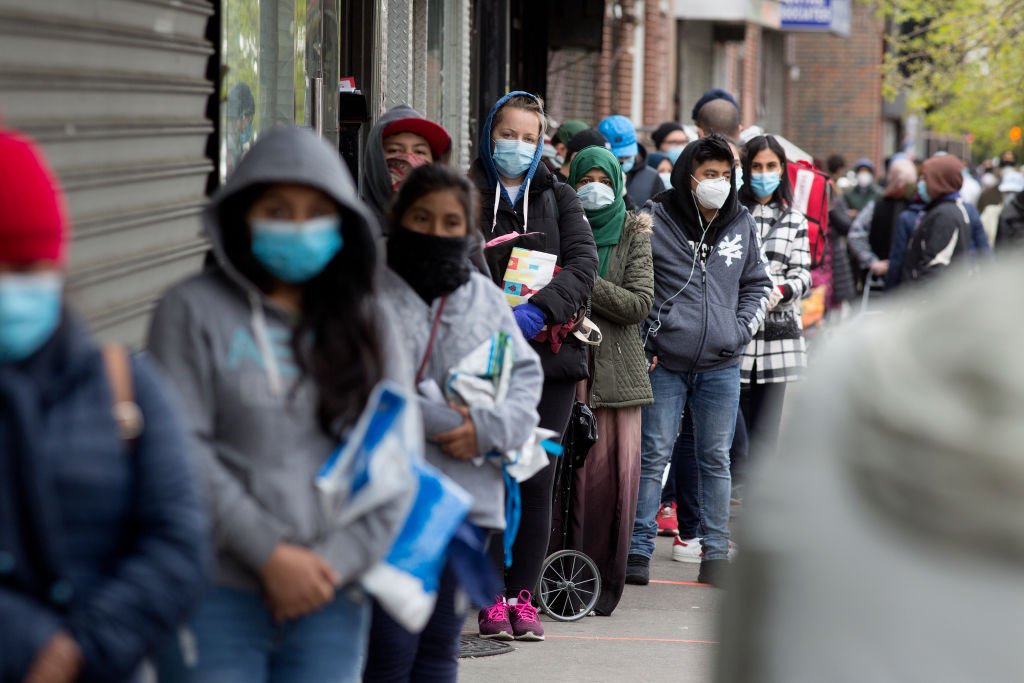 Citizens wearing protective masks form lines to receive free food from a food pantry run by the Council of Peoples Organization on May 8, 2020 in the Midwood neighborhood of Brooklyn, New York. Photo by Andrew Lichtenstein/Corbis via Getty Images
The Pandemic, Workers

In January 2021, adjunct professor Nicole Braun, 55, suddenly had no teaching gigs. For decades, she had taught classes in sociology at multiple colleges to earn a living — as many as 10 classes a semester (teaching in summers, too). But during the pandemic, her work dried up: Student enrollment was down at the community colleges where Braun primarily taught. A single mother, Braun said she sent out “literally hundreds” of job applications but to no avail. She grew frantic and submitted her application in May 2021 for unemployment insurance. Then she waited for the checks to arrive — and waited some more.

When they didn’t come, she called her state’s unemployment office and emailed them repeatedly. Some of these telephone representatives treated her as if she was “trouble,” she says, drilling her for details as though she “were a criminal.” Braun also reports being unable to access the online system, although her username and password were correct. Meanwhile, she was hit by other troubles that had to do with poverty: Her apartment sometimes lacked hot water, but she couldn’t afford to move. Friends loaned her money or otherwise supported her so she could survive.

“The whole experience was so exhausting and shaming that I never want to apply for unemployment again,” Braun says. As she continued to wait for the checks, for months, she began working as a dog walker.

Braun is just one of the many millions of Americans who were forced to navigate the nation’s tattered safety net during the pandemic. According to the Century Foundation, 1 in 4 Americans received at least one unemployment-insurance payment at some point during its course. Many people newly introduced to the system learned what low-income Americans already know: Benefits can exist in theory but can prove difficult to access.

This battle to obtain social benefits has a name: the administrative burden. While there are few studies of how much time and effort people put in to get the services they need, scholars such as Georgetown University public policy professor Pamela Herd, co-author of the book “Administrative Burden: Policymaking by Other Means,” thinks a good measure of the administrative burden is the “takeup rate” — an indication of how many people actually make use of a safety-net program, compared with the number who are eligible. A low takeup rate strongly suggests that getting aid can be unduly burdensome. In the case of Temporary Assistance for Needy Families (TANF), according to a report this year by the Center on Budget and Policy Priorities, “for every 100 families in poverty nationwide [in 2020], only 21 received TANF cash assistance.” Access to the program reached its nadir that year, the group said. For the Supplemental Nutrition Assistance Program (SNAP), the national takeup rate is about 82 percent, but it can be as low as 52 percent in some states.

What these low takeup rates mean is that in certain states, eligible populations are not accessing major programs. This includes Medicaid, whose takeup rate varies widely by state — from roughly 90 percent to less than 50 percent. Bureaucratic hurdles can take many forms: In Tennessee, for instance, an investigation by the Tennessean newspaper found that in recent years, 220,000 children had been kicked out of the state’s Medicaid program because of clerical errors — “in a system dependent on hard-copy forms and postal mail.”

Herd and others argue that the administrative burden is no accident: These systems are often meant to be difficult to maneuver — because their recipients are viewed skeptically by many Americans. Contrast Social Security’s takeup rate (almost all older Americans, an estimated 97 percent, according to the Center on Budget and Policy Priorities) with that for many other programs. That’s because, unlike say, welfare or SNAP, the Social Security bureaucracy is extremely easy to navigate online, by phone or in person. Duke University public policy scholar Carolyn Y. Barnes writes that delivery is “seamless.” (The universality of Social Security coverage also helps.)

In moments of frankness, politicians will sometimes admit the truth. “Having studied how [the unemployment system] was internally constructed,” Florida Gov. Ron DeSantis (R) told a CBS News affiliate in August 2020, “I think the goal was for whoever designed, it was, ‘Let’s put as many kind of pointless roadblocks along the way, so people just say, ‘Oh, the hell with it, I’m not going to do that.’” (Admittedly, DeSantis was also getting in a dig at his Republican predecessor as governor, Rick Scott, now a U.S. senator, during whose administration the current system was designed.)

But if the pandemic showed many who needed government aid for the first time how hard it is to obtain, it also in some ways demonstrated how we can adjust and ease these burdens.

For instance, it was announced in March 2020 that people applying for SNAP benefits no longer had to undergo in-person interviews. In such interviews, applicants are typically quizzed about such matters as their income, the size of their credit card debts and how long they have lived in their current residence — most of which information is readily available without an interview.

Similarly, as of March 2020, people enrolled in Medicaid no longer had to undergo “recertification” — a regular review of their records, to ensure that they still qualified. The process involves substantial paperwork for families and is often conducted through the mail. Partly for that reason — as well as increased demand — Medicaid enrollment by the end of November was up 20 percent since the beginning of the pandemic.

The policy shift also had a striking effect on “churn”: the cycling of people off and on Medicaid: Normally, in one year, 11 percent of children who are enrolled and 12 percent of adults would be disenrolled and then subsequently re-enrolled. That pointless pattern essentially came to an end.

How do we advance from here? How can we build on the changes introduced during the pandemic, and the insights that the surge in demand for benefits gave us about the costs of the administrative burden?

First, we should recognize that the administrative burden represents a systemic injustice. The problems people are reporting aren’t simply personal headaches: They constitute a major barrier to the access of desperately needed services.

That truth, if widely publicized, could itself help those victimized by the administrative burden — because people blame themselves for being exhausted by its demands. A broader recognition that the frustration of applicants can sometimes be baked into these systems would alleviate some of the self-blame, and perhaps channel it toward efforts to change the system.

Policymakers should, where feasible, make permanent the pandemic-era simplifications of programs like SNAP and Medicaid. The waiver of Medicaid recertification, for example, is slated to expire April 15, although it is widely expected to be renewed. Observers expect that if and when the pandemic emergency is deemed over, this could cost millions of people their health insurance. Some form of recertification probably must exist, but a more streamlined version that causes fewer people to lose coverage because of missing paperwork would be advisable. SNAP interviews, on the other hand, are basically pointless — and can include, according to people who have experienced them, prying about such issues as the cost of children’s clothes and toys.

While people’s struggles to get unemployment checks aren’t invasive in that way, they still tired many people with whom I spoke, including Lisa Ventura, a social worker in New York who had spent hours of her (scant) free time during the pandemic wrestling with unemployment forms for her out-of-work mechanic father. He is an immigrant from the Dominican Republic who needed help with translation and understanding the forms.

As for Braun, the adjunct professor, after dozens of letters and calls, she finally got much of the money she was due (although by her estimate, she is still owed $1,800). As student enrollment rebounded recently, her work picked up, and she is back to teaching six classes (each paid $3,000 or less).

The bad feelings linger, however, from her tangles with the bureaucracy.

“We live in a culture that values individualism and, thus, we are socialized to see through that lens — it causes much shame,” says Braun, who is a sociologist after all. “There is a part of me that still feels I did something wrong.”

Alissa Quart is the executive director of the Economic Hardship Reporting Project and the author of “Squeezed: Why Our Families Can’t Afford America.”