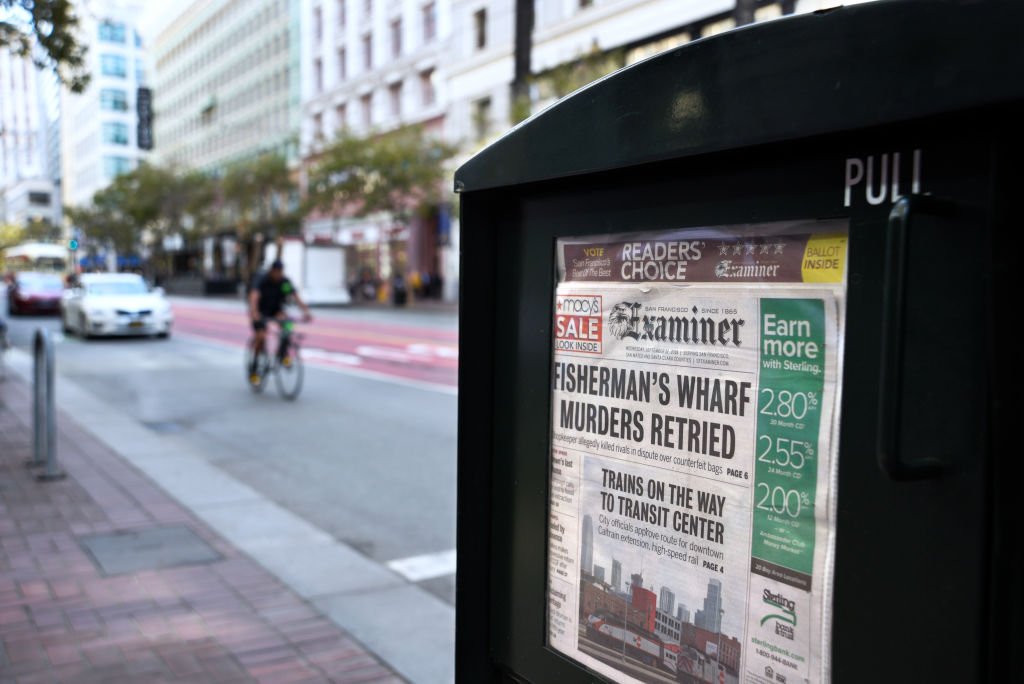 A San Francisco Examiner newspaper box in San Francisco, California, offers free copies of the newspaper. The Examiner has been published continuously since 1863. It converted to free distribution in 2003. Photo by Robert Alexander via Getty Images
Culture, Inequality

WHEN BOBBI DEMPSEY was finding her footing in her career as a freelance journalist, in 2000, she could feel a stark distance between herself and her editors. They assumed, for instance, that her town in agrarian Pennsylvania, where she lived and worked, had high-speed Internet. (Back then, it did not.) ​​Or they’d tell her to use a certain app, despite the fact that she only had a flip phone; smart phones were too costly. The first few times she had to travel to report, she didn’t have a credit card, just a debit card, and couldn’t book a hotel or cover a security deposit. Dempsey, who’s now fifty-two, felt that she was fighting a “constant battle” to prove the value of covering a “random rural area, from a reporting standpoint.” Her opponent, she felt, was a kind of editorial bias, financial but also cultural. She’d long wanted editors to “make clear that they value the insight that I and other writers with our experience can offer.” But these sorts of endorsements were few and far between.

Similarly, Alex Miller came across systemic barriers ten or so years ago, when he was an aspiring reporter in New York City. Miller, a Navy veteran, moved into a shelter when he could no longer afford housing. As he attended college in the city, he continued to write, publishing pieces that included an op-ed for the New York Times about his experiences with poverty and homelessness. Nevertheless, the slow pace of magazine and newspaper payments often stymied his ability to pay his bills promptly.

In time, Miller says, some of the interpersonal interactions he had with editors compounded the injury. After Miller submitted an autobiographical essay in which he reflected upon his mother’s paranoid schizophrenia and the poverty of his youth, he says an editor “wrote me a book to tell me how terrible my piece was, that it was one of the worst, and she had been doing this for fifteen years.” The feedback was demoralizing for Miller; at the time, he was working a security job—the latest in a series of jobs that had included giving out amNewYork on the subway, working as a server at a pizza joint, and doing maintenance at the Veterans’ Administration hospital in the Bronx. He was also recovering from post-traumatic stress disorder connected to his time in the Navy. “You can fall into a depression, if you don’t have a support group, as a freelancer,” says Miller, who is now 35 and contributes to publications including Wired and Newsweek. (Disclosure: after writing this piece, my nonprofit decided to support some of Miller’s articles.)

Negative encounters with editors like those described by Miller and Dempsey are not unusual in the media business. As I see it, those encounters owe in part to a disconnect between ranking editorial staffers at legacy media outlets and reporters—often freelancers—from less privileged backgrounds.

Elite journalists tend to graduate from a handful of select colleges; a 2018 study published in The Journal of Expertise found that “only a handful of select schools feed the mastheads of the New York Times and the Wall Street Journal, suggesting the importance of networks.” Many are the beneficiaries of what has been called journalism’s “professionalization”—a process, media professor Silvio Waisbord wrote, that “entails a unified project of occupational differentiation and the definition of common skills, norms, and ethics.” Many were trained to abide by the profession’s legacy norms in journalism schools or in newsrooms. These are places whose demographics still fail to match the audiences they strive to serve. In addition, the terms often on offer—educational debt and frequently meager wages—prevent plenty of would-be journalists from joining the profession. “Ironically, even as the economic fortunes of the news media have declined precipitously, as a social group the status of journalists has increased,” Daniel Kreiss, a professor of media studies, wrote. “Journalists are highly educated, urban, and cosmopolitan elites when compared with the publics they serve.” A number of independent contributors, meanwhile, do not meet that description.

“Most news coverage isn’t created with people experiencing poverty in mind,” Heather Bryant, a journalist and founder of Project Facet, has said. That is often made clear when outlets want to run sensitive and authentic stories concerning class. In a 2018 essay for Journalist’s Resource, Bryant and Denise-Marie Ordway, both reporters who grew up in poverty, called for our industry to “consider prioritizing a journalism for and with people over coverage about people.” But coverage for and with people isn’t possible without building class awareness into the editorial process from end to end.

How might our industry better engage with financially stressed journalists, and better serve less privileged audiences? Street papers—the dozens of publications across the country created by and for unhoused people, such as Boston’s Spare Change News or Seattle’s Real Change—offer some instructive examples. Alejandro Ramirez, the former editor-in-chief of Spare Change, says he often found himself occasionally applying “extra hands-on efforts” in order to guide contributors through the editorial process. Contributors sometimes required editing in “nontraditional ways,” Ramirez says—down to taking a handwritten story and transforming it into a typed article. “The goal,” he says, “was to publish them.” Of the lessons he took from his role, Ramirez says the most important was simple, if all-too-rare: pay writers on time. The paper’s “vendors”—those who sold and contributed to the paper—“could use that fifty dollars an article,” he says.

Kevin Howley, a media studies professor at DePauw University, described street newspapers to me as acts of “communicative democracy,” aiming to broaden the range of voices in media and create fairer public spheres. (“In their capacity as the voice of the poor, street papers seek to engage reading publics in a critically informed dialogue over fundamental issues of economic, social, and political justice,” Howley wrote in a 2003 paper.) They often take advocacy positions, and feature first-person reporting from those experiencing poverty—editorial decisions not necessarily undertaken by legacy publications. And they are participatory in ways that many legacy publications still are not.

Assigning and editing with class sensitivity means news outlets reconsidering some of journalism’s fundamental elements. This includes not only hiring reporters who have had non-“traditional” life experiences but giving them more leeway for personal expression, supporting their experiential expertise. Reporters who are struggling economically have told me in conversation that they want editors and managers to recognize their lived experience—recognition that, in turn, might help many outlets see beyond their own class limitations, and better engage issues of class and poverty in their coverage. In order to do so, assigning editors must think through the realities their contributors might confront each day, and how those realities may differ from their own.

In some cases, it might mean countering an impulse toward “tough-love” editing—an approach that may not work for every writer, or even for most writers. Writers who cover issues intersecting with financial stress, and whose own lives include it, don’t need “grit” to work in journalism; they need thoughtful approaches. Careful editing and fact-checking isn’t just about being meticulous; it should also retain the capacity for empathy, for the duration of the editorial process.

In others, it might mean reevaluating payment practices. Like most news outlets, the Economic Hardship Reporting Project (EHRP), the nonprofit news organization I direct, usually pays writers after their pieces are published. We have learned that, in a number of cases, we need to offer at least half a reporter’s fee and travel expenses up front. Some of our writers can’t afford to pay for their hotel rooms, or even their rent, in advance. Sure, we’ve been burned a couple of times. But we’ve come to think of those moments as part of a process of caring for freelancers and putting our trust in them. By and large, it has worked out for all of us.

In still others, it might mean expanding our notions of expertise. We might rethink who the expert is in an “expert” quote, and try to find these authorities outside of established institutions, or established journalistic practice. (As Ramirez said of his work at Spare Change, if you want to cover the housing crisis, for example, “you need to talk to someone who has been searching for housing their entire adult life.”) Currently, EHRP is collaborating with a number of other non-profits to create a journalist-facing database of experiential experts—an effort we’re calling Working Sources. The people in our forthcoming database aren’t just specialists by virtue of the time they’ve spent at think tanks: instead, they may have worked as daycare providers or labor organizers, or have experience with drug addiction or housing insecurity.

Working toward inclusion can feel Sisyphean. But its outcomes can be rewarding. Dempsey says she’s started to see editors pay more attention to the knowledge that comes from her own struggles; she recently published an article on free dental care for the poorest Americans in The New Yorker. (The article was supported by EHRP.)  She admits that she still has to do “a lot of code switching” to work in media. Still, she says, she takes heart from the stories she is able to tell, because “people like me finally see their stories being portrayed.” She adds: “Readers are amazed and so appreciative: they are glad to know that they are not so alone.”

Alissa Quart is the Executive Director of the Economic Hardship Reporting Project and the author of four non-fiction books including the acclaimed Squeezed: Why Our Families Can’t Afford America,  Branded: The Buying and Selling of Teenagers, and Republic of Outsiders as well as two poetry books, most recently Thoughts and Prayers.