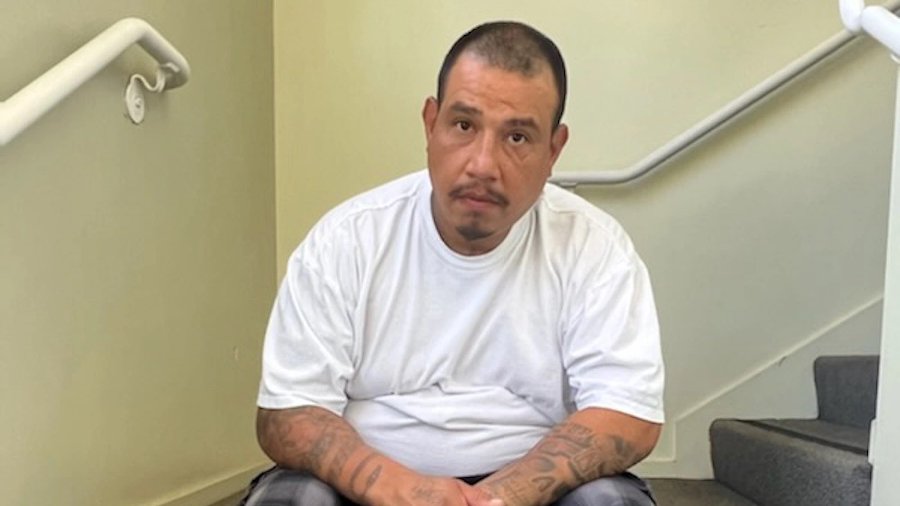 Welcome to How Are You Coping With That? a recurring column in which Lori Teresa Yearwood talks to people about how they are coping with hardship.

LOS ANGELES — A year and three months ago, Salvador Chacon got called off a Section 8 waiting list for government-subsidized housing. After more than 30 years of living in homeless shelters and on the streets of Skid Row, Chacon claimed the physical safety of a roof over his head. Internally, however, the 42-year-old admits that he remained as untethered as ever, a traumatized state of lostness that some mental health experts are now calling “emotional homelessness.”

When he moved into his little home in June, that internal chaos brought Chacon, a Los Angeles gang member who said he is “trying to better myself,” to the single window in his studio apartment to peer outside. He worried that the gangs he knew so well were still outside, waiting to kill him.

As each month passes, that fear gradually lessens. But other memories continue to stalk Chacon, even at the seemingly simplest of times. For example, when he stands in front of his kitchen sink, paralyzed by the childhood memories of his foster parents beating him and his older brother, then ages five and six, because the children failed to clean to the adults’ standards.

“I want to live in a clean place,” Chacon sobbed into the phone, “but I freeze and I don’t know what to do. It’s hard for me to function inside the house. It’s like there is something missing but I don’t know what it is.”

That something is an internal sense of “home,” Chacon has learned in therapy—a psychological safety that Chacon and countless other individuals emerging from homelessness must find through healing.

It’s a prevalent theme amongst formerly unhoused people, even when they become housed, says psychiatrist Dr. Van Yu, Chief Medical Officer at the Center for Urban Community Services in New York City. The nonprofit provides integrated programs linking housing, health, and social services for New York’s unhoused and most vulnerable individuals. With 17 years experience “sitting across tables from people who have been traumatized in homelessness,” Dr. Yu said “the struggle to feel safe” is one of the most prevalent issues that he sees amongst his clients, even once they are housed.

“A fair number of people who enter supportive housing will sleep on the floor for days or weeks or even months because they still don’t feel safe enough to sleep on the bed,” Dr. Yu said. This is due to past traumas experienced in homelessness, as well as preceding homelessness.

Dr. Yu and I, as well as other mental health experts, talked about the term “emotional homelessness,” loosely defining it as a kind of traumatized filter through which a person perceives life. This filter is like a layer of mud covering the mind, a filter that can cause deep fear and suspicion, and plunge a person into a seemingly impenetrable isolation.

Unaddressed, these mental health issues can drag individuals into vulnerable states of additional suffering, even back into homelessness.

Consider how substance abuse is often used to mask deep emotional trauma, Dr. Yu points out. If left unacknowledged and untreated, that trauma, in turn, can lead individuals into behaviors that can get them evicted from living situations that aren’t based in the tenants of supportive housing followed by the Center for Urban Community Services.

I asked Chacon if he is ever tempted to go back to the streets.

“All the time,” he said. “It was a lot easier for me on the streets—I knew how to cope better. Now I got this apartment and I’m stuck in my own mind.”

Chacon’s Section 8 apartment isn’t part of any supportive housing services. But a phone call to a good friend sometimes calms him enough to risk walking down South Figueroa Street in Los Angeles, where the bus takes him to the Los Angeles headquarters for Homeboy Industries, the largest gang rehabilitation and re-entry program in the world, the organization touts.

Said Chacon: “I have never been anywhere in my life, other than prison, where there is respect like this. Only here at Homeboys, is there respect and love—and that’s what keeps me coming back. I ain’t never felt that in my whole life. If It weren’t for Homeboys, I’d surely be dead.”

In total, Chacon says he spent about 10 years in prison, something he didn’t mind at the time because it gave him a place to live. He was incarcerated for multiple transgressions, he says, including possession of guns and stolen cars.

Another coping mechanism that helps Chacon get out of his studio apartment: thinking about how far he has come—how he joined Homeboy in 2013, became completely drug free when he stopped using heroin in 2014, and how he helps the mother of their five children with the leftover money from his $250-a-month disability checks. He receives those checks because of the seizures he experiences from a warring gang member’s bullet that careened through Chacon’s head when Chacon was 15.

Evan Hess, who runs the parenting project at Homeboy Industries, is a long-time friend of Chacon’s, and has known Chacon since his days on the streets of Los Angeles.

“The biggest change that has happened to Sal is that he’s housed, but that, in and of itself, can be a barrier when you are dealing with mental health issues like post-traumatic stress disorder.”

Evan used to drive to Chacon’s apartment to make sure that the car Chacon believed contained an ill-intentioned gang member was, in fact, empty.

“Sometimes I have to be very blunt and tell him (Chacon) that ‘you’re tripping—and you need to trust me.’”

When even the supportive calls can’t pull him out of the shadows of the past, Chacon dims the lights in his apartment, curls up on the floor with his black and white Shih Tzu, named, “Low Key.” There, the two huddle together as if in a fox hole, waiting for the anxiety to lift.

But once he’s at Homeboy’s headquarters in Los Angeles, Chacon volunteers as one of the organization’s tour guides for the public and media. There, he tells his story with heartfelt transparency.

Until he moved into his studio three months ago, Chacon can’t remember a time when he wasn’t living on the streets of Los Angeles.

“We (my family) lived in cars, we slept in abandoned houses—growing up, that’s all I knew,” he said.

Some of Chacon’s earliest memories include officers arresting his mother and father for selling and using heroin. Then, when he was around the age of five, Chacon remembers sleeping with his older brother in his mother’s van. His mother woke them up to tell them that she was going to go get some food. “My mom shoplifted to feed us,” Chacon said. The only thing that made that day different from all the others before it: His mother never came back.

“My father was already in prison,” Chacon said.

After three days of living in the van with his brother, who was six-years-old at the time, a woman who lived near the abandoned van noticed the children inside and called the Department of Family and Child Services. Chacon and his brother were quickly put into foster care. But Chacon never considered that existence “home” either; the foster parents beat him with wires, broom, bats and golf clubs. “Whatever they could find,” Chacon said.

He ran away and began living on the streets of Los Angeles when he was 12.

After foster care came gang life. It’s the remembrance of that brutality that sometimes continues to keep Chacon from leaving his apartment.

Said Theresa Karanik, a social worker at the Los Angeles headquarters for Homeboy Industries: “People who have experienced life on the margins of any kind can often be emotionally unhoused.”

Her perspective is based on 14 years working with former gang members who have experienced homelessness.

“Our clients tend to come in with histories of trauma and experiences of poverty, incarceration, and institutionalized racism. These inequities impact their education, the place where they live, available resources and their family dynamics. These issues are often at the core of emotional homelessness.”

Chacon says he relates to the term “emotional homelessness.” And while he knows he’s made progress in the last three months—he no longer, for example, needs to ask his friend to check the inside of vans—he also concedes that he wants to make more progress in his healing.

“I don’t want to let these things keep me from living my life,” he said.

He wants to prove to the mother of their children that he’s marriage material, he says. And he wants to find a way to move out of Section 8 housing so he can live with his family, or offer housing to anyone he knows who needs it.

“That’s the legacy I want to leave,” Chacon said. “A home for people who need one.”

Lori Teresa Yearwood is a trauma-aware and trauma-sensitive journalist currently covering the U.S. housing crisis for the Economic Hardship Reporting Project. A former reporter for the Miami Herald, the St. Louis Post Dispatch and the Syracuse Newspapers, she has always written stories about people from populations that have been marginalized.