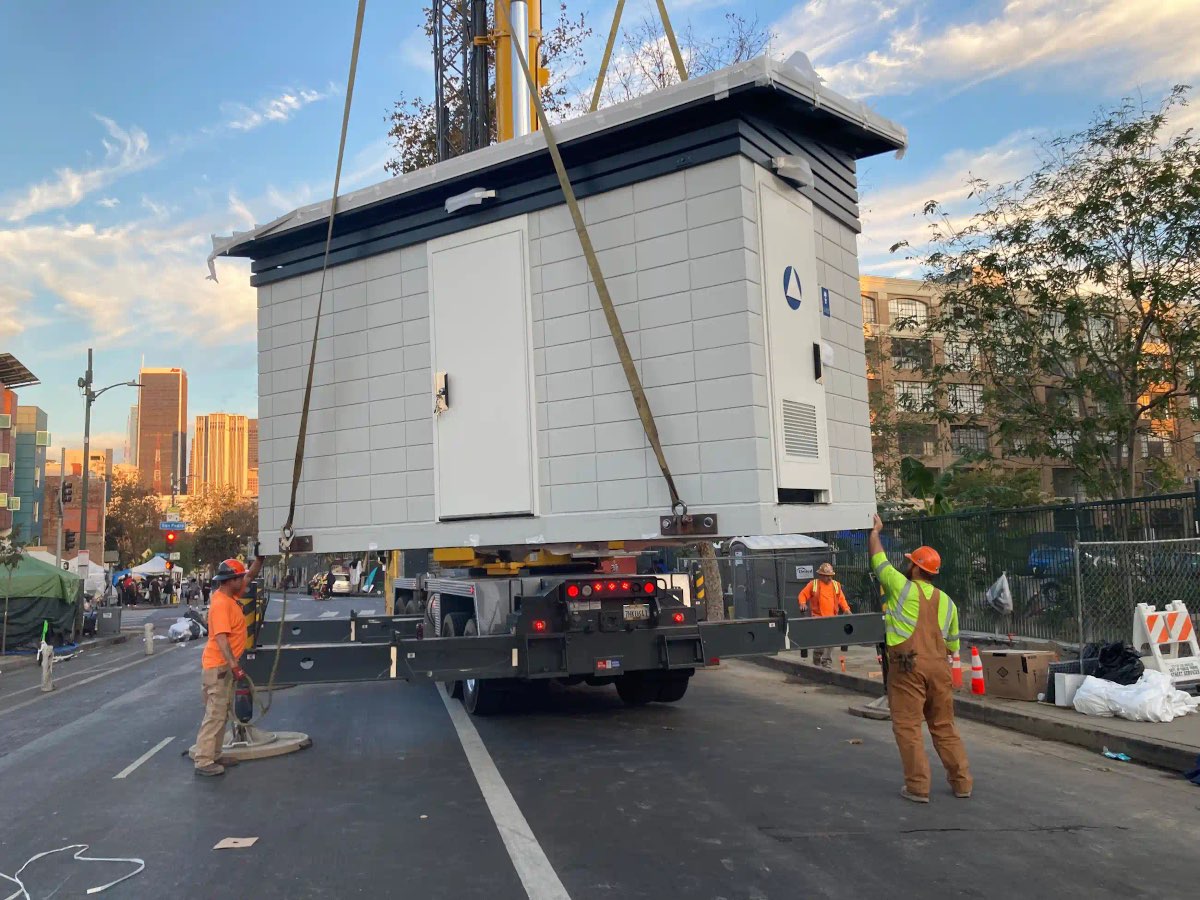 A new bathroom is delivered to the Skid Row neighborhood in October. Photo by Maylin Tu
Cities, Housing

The sun is rising over Skid Row as a crane slowly lifts a shiny, two-unit toilet from the back of a truck and on to the sidewalk. The new bathroom – rectangular and off-white with a ventilated roof – is replacing another unit that has stood on this corner for over 15 years.

The upgrade is a hopeful moment. But for the more than 4,400 unhoused people who call Skid Row home, finding a bathroom remains a daily trial.

Residents must make do with a patchwork of public bathrooms and porta-potties that are operated by overlapping municipal programs, shelters and non-profit groups. The challenge is compounded by the fact that many toilets are shut down overnight. Five years ago, a report called No Place to Go found that Skid Row had just nine public toilets available at night for about 1,800 people then living there – 80 toilets short of the UN standard for a refugee camp.

While the situation has improved, Skid Row’s population has grown. There are currently about 31 toilets available at all hours, according to a Guardian review of public facilities and information provided by the city – still far short of the UN standard.

The result is a vicious cycle, advocates say. Unhoused Angelenos are often left with no option but to relieve themselves outdoors, then are demonized for leaving behind human waste. According to the LA county health department, the lack of hygiene and sanitation leaves residents at risk of contracting staph, meningitis, tuberculosis, hepatitis A, typhus and more.

Conditions have taken on increased urgency amid a worsening homelessness crisis. With pandemic-era protections for renters scheduled to end within weeks, experts say 30,000 households risk being evicted. LA county’s unhoused population reached more than 69,000 at the latest count, while on Skid Row – a longstanding symbol of the US housing crisis – the number of people living unsheltered grew by over 50% in the past six years, according to figures from the Los Angeles Homeless Service Authority (Lahsa)’s annual count.

On the October morning of the toilet installation, Montgomery Garnett, a resident of Skid Row, walks up to a group of city workers who assembled to watch. “Gentlemen, one key question,” he asks. “Was there a feasibility study done to make sure that this satisfies the need?”

‘The business community wanted them gone’

Toilets on Skid Row have always been political. Branded by the media and the LAPD as a haven for drugs and sex work, they have functioned for decades as a key battleground in what the late writer and scholar Mike Davis called “the city’s war on the homeless”. After years of back-and-forth in which activists would bring toilets to Skid Row only to have the city remove them, 26 portable toilets were added in 1994. But they were not popular with everyone.

Alice Callaghan, director of Las Familias del Pueblo, a community center for garment workers and their families, explains that many business owners saw the unhoused people of Skid Row as a threat to their livelihood and wanted the area forcibly cleaned up. “It was part of the battle that was going on at that time when the business community just wanted the Skid Row people gone,” she says. “They wanted the police to run them off the sidewalks.”

By the late 1990s, not only did business owners want the toilets removed, they were also lobbying the LA city council to make public urination and defecation illegal.

The solution was a 20-year street furniture contract with the Paris-based company JCDecaux to bring 150 self-cleaning, automated toilets to the streets of LA. The deal would pay for the toilets through advertising on bus shelters, kiosks and newstands. Not only would JCDecaux pay to install and maintain the toilets, but it would also build 1,250 new transit shelters and share a percentage of advertising revenue with the city – a projected $150m over 20 years.

But the contract quickly devolved into a bureaucratic nightmare. City officials failed to approve bus shelter permits in a timely manner, if at all. In the end, only the minimum 15 toilets were installed, far short of the promised 150. 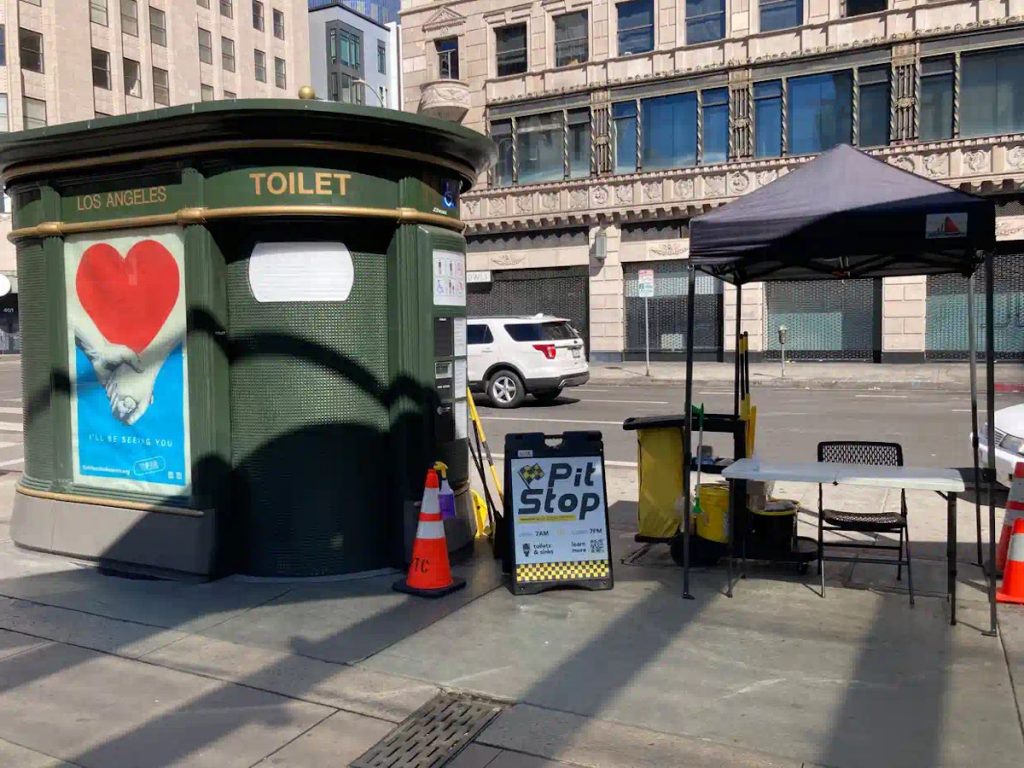 An APT toilet in the area. Photo by Maylin Tu

Five of those toilets landed in the heart of Skid Row between 2004 and 2010. Demand was immediate – according to records from StreetsLA, the very first automated public toilet (APT) installed in Skid Row in 2004 saw up to 4,500 flushes a month, or 150 flushes a day.

“The folks down there really appreciated the toilets,” said Oishi. “They recognized that it was a community resource and that if someone vandalized it or messed around with it, that the city might either shut them down or take them away.”

But tensions between the city and residents escalated when, in 2006, the city implemented a strategy known as the Safer Cities Initiative, focused on quality-of-life crimes like jaywalking, littering and public urination. Fifty additional police officers were added to the 54 square blocks of Skid Row as part of the initiative, and the city hauled away the existing portable toilets to prevent homeless people from loitering.

As the LAPD cracked down on unhoused residents – officers made roughly 9,000 arrests and issued about 12,000 tickets in its first year – the agency complained that the new toilets, like their portable predecessors, were being used for drugs and sex work.

But advocates argued that there was no proof that the toilets were causing crime and questioned why the city refused to provide adequate hygiene amenities while investing millions in policing the neighborhood. Charles Porter, of the United Coalition East Prevention Project, explains that poor people lack privacy and this drives a double standard. 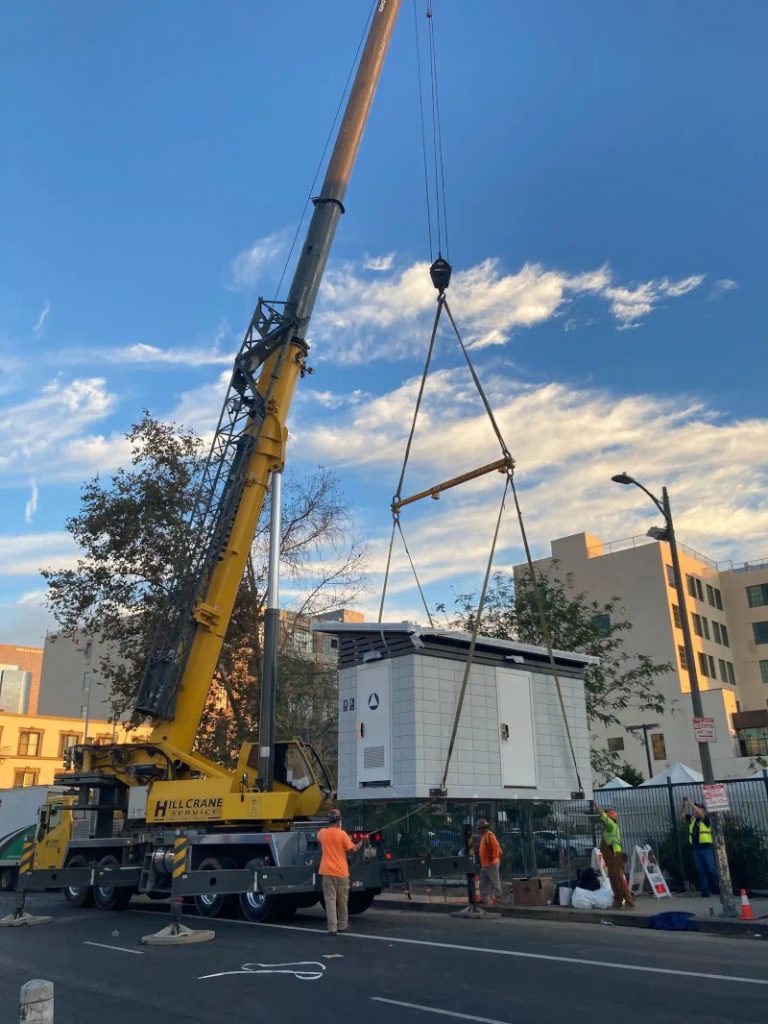 Activists argue that LA authorities have used toilets as a tool to discipline the population rather than treating access to bathrooms as a basic human right. Photo by Maylin Tu

Activists argue that LA authorities have practiced organized abandonment in the community, using toilets as a tool to discipline the population and bring them under control – the carrot and the stick – rather than treating access to bathrooms as a basic human right.

By 2012, the city was shutting down three of the five APTs from dusk to dawn at the request of the LAPD. Tensions reached new heights when, in 2015 – the final year of the Safer Cities Initiative – LAPD officers shot and killed an unarmed man steps away from the APT, where he had pitched his tent. The killing of Charly Leundeu Keunang, who went by “Africa”, sparked days of protest and renewed questions over the treatment of Skid Row residents.

New alternatives – with more work to do

In recent years the city has put forward new solutions.

In December 2017, after the release of the No Place to Go report, the city opened a facility called the ReFresh Spot. Run by the non-profit Homeless Healthcare Los Angeles and funded through the mayor’s office, it contains seven toilets, six showers, and 24 washers and dryers. The space receives about 17,000 visits per month.

Stephany Campos, the ReFresh Spot’s executive director, says that in 2017 the team recommended at least “at least four or five hygiene centers throughout Skid Row”. But there is still only one.

When asked why the city had not added more, a spokesperson for LA’s outgoing mayor, Eric Garcetti, said his office was preparing a proposal for another ReFresh Spot. “The City takes the health and wellbeing of people experiencing homelessness very seriously, and has stepped up to lead the region on the deployment of public hygiene resources in Skid Row and other high-impact areas,” Jose “Che” Ramirez, the deputy mayor for city homelessness initiatives, in a statement.

The Guardian also asked Karen Bass, the incoming Los Angeles mayor, about her plans for addressing the issue. Zach Seidl, a spokesperson for Bass, said the new mayor was “pulling together her team to bring Angelenos inside and confront the homelessness crisis head-on” but did not comment directly on the toilet crisis at Skid Row.

In addition to the ReFresh Spot’s toilets, there are three APT locations, 10 portable toilets deployed by the United Homeless Response Center (down from 54 early in the pandemic) and 11 toilets at the Midnight Mission (one of the “mega shelters” in Skid Row) – all of which are open 24 hours a day.

A program called Pit Stop has put paid “ambassadors” at the three APTs. These ambassadors are trained to administer Narcan, properly dispose of hazardous waste and direct people to services, an approach that, according to StreetsLA, has been a more humane solution to keeping toilets free of illegal activity.

The need for more facilities remains high, but despite their continuing frustrations, attendees at the sunrise toilet drop are polite, even laudatory at the sight of the new bathroom. With the normally busy 5th Street shut down to traffic, people go about their mornings – one resident even frolics in the open street, free from the fear of cars.

“Beautiful. Thanks, guys. We love it,” says a woman who rolls past on an office chair.

The lack of a lasting solution points to an uncomfortable paradox. To invest in public infrastructure like more bathrooms would be to admit that more people are falling into homelessness every day, and it’s only getting worse.

“Nobody’s ready to admit that Skid Row is here to stay,” says Callaghan.

Garnett sees a simple solution for the toilet crisis in his community, something that the city has failed to do for decades.

“It helps,” he said, referencing the new bathroom. “But a study needs to be done to find out: what is the appropriate solution?… Rather than one porta-potty here, one porta-potty [there] – what will satisfy the needs of the community? And once you do that, it’s done.”

Maylin Tu is a freelance writer who lives in Los Angeles. 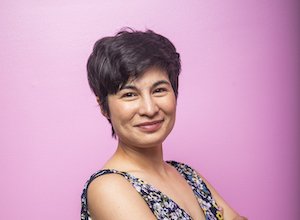 Maylin Tu is a freelance writer who lives in Los Angeles.